List of cooperative residences. Seattle has an active alternative living scene and there are a wide variety of cooperative living arrangements available - so, if you want to live WITH people, you can probably find a place and group that works for you. 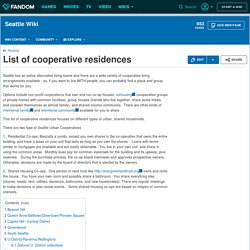 Options include non-profit corporations that own and run co-op houses, cohousing (cooperative groups of private homes with common facilities), group houses (friends who live together, share some meals, and consider themselves as almost family), and shared-income communes. There are other kinds of intentional familiy and intentional community available for you to share. This list of cooperative residences focuses on different types of urban, shared households.

Steward Handouts. NOLA Express — Browse by title — Independent Voices. Gulf Coast grassroots resistance journalism. Compost heater. A compost heater (or Biomeiler) is a structure for the energetic use of biomass for the heating of buildings.[1][2][3] The method was developed by Jean Pain in the 1970s. 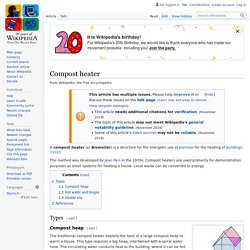 Compost heaters are used primarily for demonstration purposes as small systems for heating a house. Local waste can be converted to energy. Types[edit] Using the heat of an external compost heap for warming up the inside of a house Compost heap[edit] The traditional compost heater exploits the heat of a large compost heap to warm a house. Court Rules Churches Can Continue To Conceal Financial Information. Freedom From Religion Foundation's lawsuit challenging the exemption of churches from the requirement to file Form 990 has been dismissed . 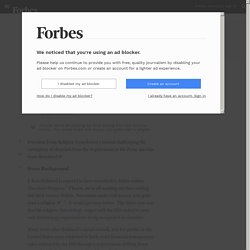 Some Background L Ron Hubbard is reputed to have remarked to fellow author Theodore Sturgeon " Y'know, we're all wasting our time writing this hack science fiction, You wanta make real money, you gotta start a religion ". It would get even better. The thirty year war that his religion, Scientology, waged with the IRS ended in 1993 with Scientology organizations being recognized as churches. 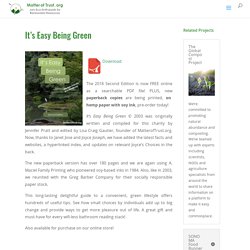 Untitled. Untitled. Reforestation is a Powerful Natural Climate Solution We are at a critical juncture for the future of the planet: We need to reach net zero greenhouse gas emissions by mid-century to keep global temperature increases under 2°C. 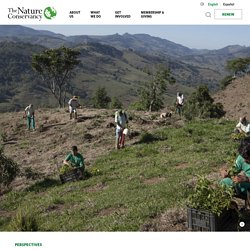 While most efforts toward this goal have been focused on reducing fossil fuel use, new science shows that natural climate solutions can deliver up to 37 percent of the emission reductions needed by 2030. These natural climate solutions include improvements to the way people conserve, restore and manage forests, grasslands and wetlands. Overview. History Historically, one of the most important challenges and responsibilities of the USDA Forest Service has been to establish forests on lands that are unstocked as the result of natural catastrophes, excessive cutting, fire, insects or farming practices of the late 19th and early 20th centuries. 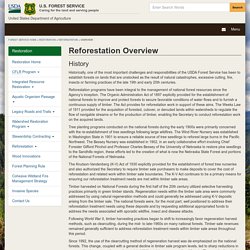 Reforestation programs have been integral to the management of national forest resources since the Agency’s inception. NASA Chief Backs Agency Openness. A week after NASA's top climate scientist complained that the space agency's public-affairs office was trying to silence his statements on global warming, the agency's administrator, Michael D. 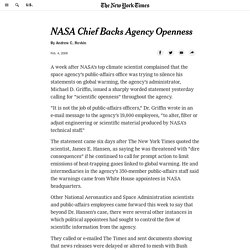 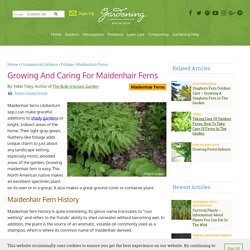 Their light gray-green, feathery-like foliage adds unique charm to just about any landscape setting, especially moist, wooded areas of the garden. Growing maidenhair fern is easy. This North American native makes an excellent specimen plant on its own or in a group. It also makes a great ground cover or container plant. Maidenhair Fern History Maidenhair fern history is quite interesting. Garden Ferns - How To Grow And Care For A Fern Garden Outdoors. By: Susan Patterson, Master Gardener Although we are most accustomed to seeing graceful ferns throughout woodlands and forests where they nestle under tree canopies, they are equally attractive when used in the shady home garden. 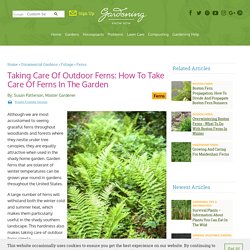 Garden ferns that are tolerant of winter temperatures can be grown year round in gardens throughout the United States. A large number of ferns will withstand both the winter cold and summer heat, which makes them particularly useful in the shady southern landscape. Seeds, Plants and Garden Supplies. 5 Secrets to Vegetable Garden, Companion Planting Revealed - Organic Authority. What is Companion Planting? 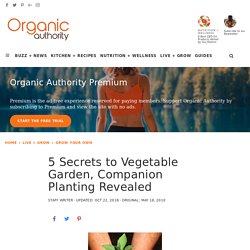 Companion planting is simply planting different garden plant species next to each other, so that one or both of the plants benefits one another. Companion planting is sometimes referred to as a botanical "buddy system". Intermixing the right combination of garden plants like vegetables, herbs and flowers. Homemade Potting Media. Many cost conscious home gardeners and do-it-yourselfers are often looking for cheaper ways of growing plants for home and garden use. One way to achieve this may be by making homemade potting media rather than purchasing pre-made materials at garden centers and home supply stores. Although purchasing the base ingredients and developing your own mix may not result in a cheaper mix, it does offer the opportunity to be creative and to modify mixes for specific goals or plants that you feel would make a media better for your situation.

The following information will provide you with a basic understanding of potting media ingredients and steps for making a homemade media from scratch. How To Grow Wandering Jew Plant Outside As Ground Cover. Planning to have wandering jew plants outdoors as ground cover? Yes, it’s possible! 122 DIY Greenhouse Plans You Can Build This Weekend (Free) Growing Great Soybeans. EAP Publications | Virtual Library | Magazine Rack | Search | What's new Join the Ecological Solutions Roundtable by Dr. Harold Willis. How to Preserve Cucumbers : 3 Steps. AdWords We use AdWords to deploy digital advertising on sites supported by AdWords. Ads are based on both AdWords data and behavioral data that we collect while you’re on our sites.