Welcome to the Metacurrency Project 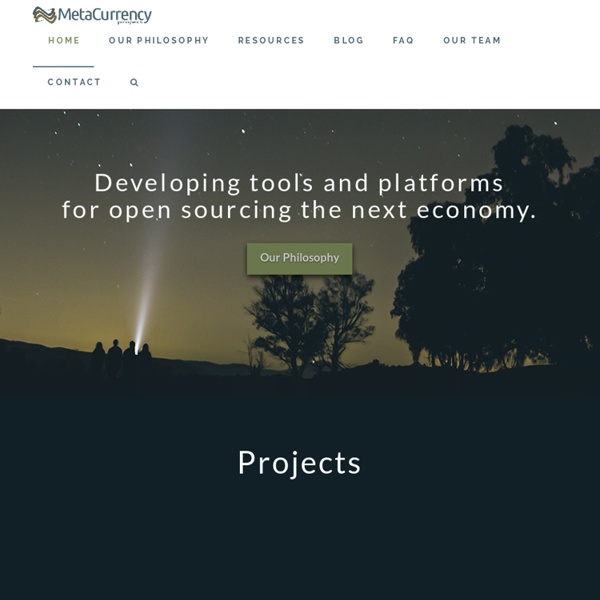 Matslats - Community currency engineer | "Blessed is he who has found his work. Let him ask no other blessing" - Thomas Carlisle LETSystems - the Home Page Bitcoin and ethics Recently I have been following and participating in some political discussions on IRC and the Bitcoin forums. What has impressed me is the diversity of political opinions expressed in relation to Bitcoin. In one discussion you can find a person defending libertarian islands, while in another someone else is espousing the virtues of socialism. What seems abundantly clear to me is that Bitcoin is not a political movement. Long ago anthropologists noticed that there was a big difference between what people say about what they do and what people actually do (the classic reference here is Malinowski, but I would also cite a much more recent discussion in Ferguson). When you ask someone why they use Bitcoin, for example, they will likely give you an explanation that will tell you about their political views or personal values. So what is the Bitcoin ethic? These features, and others that I have not mentioned, form the ethics of Bitcoin. Photo credits: flickr aimeefleck and keep_bitcoin_real

GiftPunk: A Twitter Tool for Giftcasting Recently I’ve been thinking about communities, and how to build them. Communities are in some sense defined by the flow of gifts, rather than market-based transactions. Perhaps the kinds of behaviour encouraged by the market is one of the reasons communities have been in decline in recent history. As one person put it to me recently, “community building is a truly 21st century problem.” If gifts define community, it might be because they encourage feelings of generosity and gratitude, and hence bonds of kinship. After experimenting with #PunkMoney, a promise currency based on Twitter, I’ve been exploring how Twitter can be adapted and repurposed to do new, unexpected things. How it works A community sets up a central account, for example @OccupyLondonGifts. For example, if Alice wanted to offer legal advice, she could tweet: @OccupyLondonGifts I offer an hour of legal advice. – Alice GiftPunk can find Alice’s tweet, interpret it and tweet through the community account: – @OccupyLondonGifts

In One Month, Everyone In Iceland Will Own Cryptocurrency The cryptocurrency craze spun into a new realm of ridiculous with Kanyecoin, Dogecoin, Ron Paul Coin and the bounty of other clone-coins that sprung up to ride the Bitcoin wave. But the latest altcoin to enter the market, Auroracoin, wants to take the futurist trend back to its cryptoanarchist roots. The altcoin was designed specifically for Iceland, and the creator plans to give every citizen of the Nordic country a digital handful of Auroracoins to kickstart their use. Auroracoin is the brainchild of cryptocurrency enthusiast Baldur Friggjar Odinsson, and he'll be the one distributing pre-mined coins to the entire population of Iceland at midnight on March 25 in a countrywide "airdrop." "So I intend to leverage this system so everyone has a chance to verify their ID and get their share of Auroracoins. Why would someone want to give away over 10 million digital coins? Iceland's new 10,000 ISK bill is worth about $85, according to the Central Bank. So can it work?

Michel Bauwens: A peer-to-peer economy This interview is part of an exclusive series Paper.li is doing with the CulturaDigital.Br festival in Rio. Paper.li is CulturaDigital.Br’s media partner and is bringing our community a taste of the keynote speakers’ talks ahead of the event. Peer-to-peer originated in technology… but can it help transform society? Michel Bauwens, leading P2P advocate, tells Paper.li that Yes, it can. Michel Bauwens is an academic, former dotcom entrepreneur and information management pioneer who coined the idea of the ‘cybrarian’. These days, he is pretty prominent as founder of the Foundation for P2P Alternatives, which works with global researchers to study peer to peer trends with the aim of proposing strategies for political and social change. Above all, it’s a relational dynamic in which people exchange not with each other as individuals, but with a commons. Models born from accepting shared innovation commons, limiting intellectual property rents and monopolies. There are two ways to get involved.

#PunkMoney: How to Print Money on Twitter NB: For a more up to date post on #PunkMoney, go here. In the Middle Ages, producers created their own money as a promise to deliver goods and services in the future, and spent it with people who trusted them. The promisee, who became the bearer of a new credit note, could transfer it to a third party as payment, by signing it on the back. Today, as we face another shortage of sovereign money, why not revive the old practice with new technology? So here’s a proposal on how to literally print money with Twitter, called #PunkMoney. To make #PunkMoney work best, I’ve put together a set of minimal rules for money issuance, transfer and redemption. My suggestion is to make promises you feel you can actually keep, as this makes it all much more fun for everyone else. Print money To create new money, just tweet it into existence as a promise to somebody. @someone I promise to pay you, on demand, [Insert whatever you promise here] You might want to add some details, like an expiry date That’s all

Bitcoin 2.0: Can Ripple Make Digital Currency Mainstream? It has been a nail-biting year for people who hold Bitcoins, an open-source digital currency that has quickly gained traction in the tech community. Last June, Bitcoins were worth $5. By April 2013, they were up to $266. Then they dropped to $70 in April. They were back up to $108 by May 7. Bitcoin is volatile. But here’s the thing about open-source currencies: they’re open to improvement. Bitcoiners could have reason to be suspicious of Ripple right off the bat. OpenCoin co-founder Chris Larsen believes that having a central company behind the currency is to its users’ benefit. The Mechanics of Ripple The Ripple platform serves two purposes: it’s a distributed open-source payment network, and it’s the home of the newly minted XRP currency. Participants can exchange dollars, yen, Euros, and even completely made-up currencies, all of which are entered into the system via "gateways." If one gateway is taken out by a hacker, users can move on to the next. Distribution

Global Economics Gets a Facelift With The Atlas of Economic Complexity - Business Launch Slideshow Economists Ricardo Hausmann and César Hidalgo released their Atlas of Economic Complexity at the Harvard Center for International Development on Thursday. The 300-plus page atlas is unlike any you’ve seen before—it doesn’t inform readers where they are geographically, and it won’t be any help when charting pan-continental adventures. It’s not a crystal ball, but it could very well be a map for global investment over the next decade. The atlas starts with the idea that the wealth and potential of nations is derived from productive knowledge. By this measure, Uganda has the most potential of any country in the world, followed by Kenya, Tanzania, Zimbabwe, and Madagascar. By using vibrant visualizations, Haussman hopes that the atlas will draw in investors, economists, governments, corporations, and the average reader. All images courtesy of Atlas.media.mit.edu

What should Peer-to-Peer Money be? Thinking about debt outside the twin intellectual straitjackets of state and market opens up exciting possibilities. For instance, we can ask: in a society in which that foundation of violence had finally been yanked away, what exactly would free men and women owe each other? What sort of promises and commitments should they make to each other? This post is more about principles than detail; though I intend to follow up with more information about Pebble, a project I am collaborating on to create money around trust, soon. The idea is to use this post to define what I think is the most pressing question in the future of money debate: how to create genuine, decentralised and abundance-based peer-to-peer money. Money matters First of all, a detour. However, I want to look at a different question, which I think is fundamental to the future of money. Given this, I can return to peer-to-peer money. 1. Peer-to-peer money should be radically decentralised. 2. 3. 4. Why build it?

Communities print their own currency to keep cash flowing By Marisol Bello, USA TODAY A small but growing number of cash-strapped communities are printing their own money. Borrowing from a Depression-era idea, they are aiming to help consumers make ends meet and support struggling local businesses. The systems generally work like this: Businesses and individuals form a network to print currency. Shoppers buy it at a discount — say, 95 cents for $1 value — and spend the full value at stores that accept the currency. Workers with dwindling wages are paying for groceries, yoga classes and fuel with Detroit Cheers, Ithaca Hours in New York, Plenty in North Carolina or BerkShares in Massachusetts. Ed Collom, a University of Southern Maine sociologist who has studied local currencies, says they encourage people to buy locally. "We wanted to make new options available," says Jackie Smith of South Bend, Ind., who is working to launch a local currency. "We print the real thing," she says. The IRS gets its share.

14 Ways an Economist Says I Love You. Give your loved one a nerdy Valentine and they'll be yours forever! Why? Because if you give them diamonds/cufflinks this year, anything you get them next year will fall short. Give them one of these and anything they receive next year will be a step up.