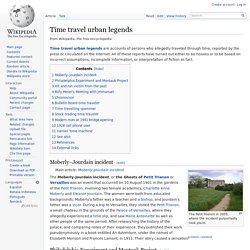 All of these reports have turned out either to be hoaxes or to be based on incorrect assumptions, incomplete information, or interpretation of fiction as fact. Moberly–Jourdain incident[edit] The Petit Trianon in 2005, where the incident purportedly took place. The Moberly–Jourdain incident, or the Ghosts of Petit Trianon or Versailles was an event that occurred on 10 August 1901 in the gardens of the Petit Trianon, involving two female academics, Charlotte Anne Moberly and Eleanor Jourdain. The women were both from educated backgrounds; Moberly's father was a teacher and a bishop, and Jourdain's father was a vicar.

Philadelphia Experiment and Montauk Project[edit] The story is widely regarded as a hoax.[2][3][4] The U.S. Hit and run victim from the past[edit] Main article: Rudolph Fentz Billy Meier's Meeting with Jmmanuel[edit] Main article: Billy Meier. 10 Real Incidents that Prove Time Travelers Exist. New Theory Scientifically Explains The Afterlife And The Soul. Photo Credit: Alex Grey By Steven Bancarz| I recently put together an article laying out all of the evidence for the existence of reincarnation, and a scientific study which validates out-of-body experiences. 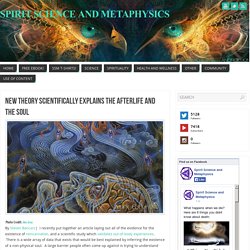 There is a wide array of data that exists that would be best explained by inferring the existence of a non-physical soul. A large barrier people often come up against is trying to understand how the soul could even fit into our scientific understandings of consciousness. Thankfully, we now have a theoretical framework that explains the existence of the soul and even the afterlife.

According to Dr. The Science That Validates Astrology. As·trol·o·gy noun \? 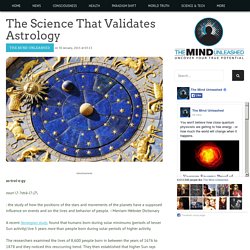 -? Strä-l? -j? \ Did Quantum Physics Just Prove The Existence of An Afterlife? » Scientists have found that memories might be passed down through generations in our DNA. New research from Emory University School of Medicine, in Atlanta, has shown that it is possible for some information to be inherited biologically through chemical changes that occur in DNA. 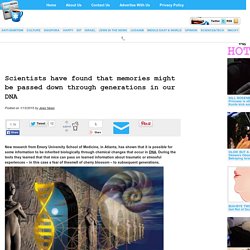 During the tests they learned that that mice can pass on learned information about traumatic or stressful experiences – in this case a fear of thesmell of cherry blossom – to subsequent generations. According to the Telegraph, Dr Brian Dias, from the department of psychiatry at Emory University, said: ”From a translational perspective, our results allow us to appreciate how the experiences of a parent, before even conceiving offspring, markedly influence both structure and function in the nervous system of subsequent generations. Earth's Toroidal Field has been Discovered! If you have studied energy or sacred geometry you may be familiar with the toroidal energy field that is around all living things. 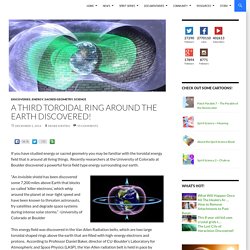 Recently researchers at the University of Colorado at Boulder discovered a powerful force field type energy surrounding our earth. “An invisible shield has been discovered some 7,200 miles above Earth that blocks so-called ‘killer electrons,’ which whip around the planet at near-light speed and have been known to threaten astronauts, fry satellites and degrade space systems during intense solar storms.”

-University of Colorado at Boulder This energy field was discovered in the Van Allen Radiation belts, which are two large toroidal shaped rings above the earth that are filled with high-energy electrons and protons. » Simulation Shows Time Travel Is Possible. Australian scientists created a computer simulation in which quantum particles can move back in time. 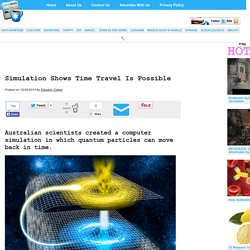 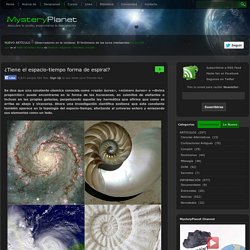 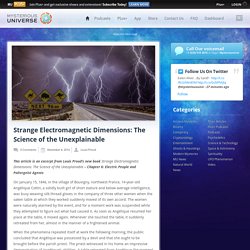 The women were naturally alarmed by the event, and for a moment work was suspended while they attempted to figure out what had caused it.