AndroLib, Find all the applications and games available in the Android Market for your Android Phone, Droid, Galaxy S etc... 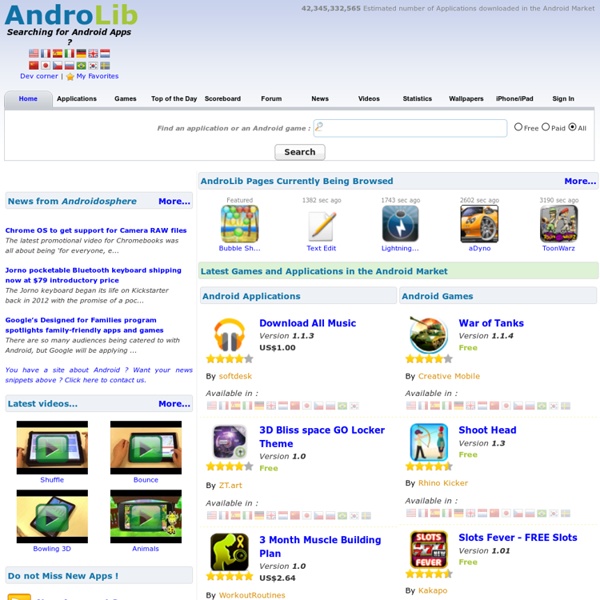 Common Layout Objects A layout defines the visual structure for a user interface, such as the UI for an activity or app widget. You can declare a layout in two ways: Declare UI elements in XML. Android provides a straightforward XML vocabulary that corresponds to the View classes and subclasses, such as those for widgets and layouts.Instantiate layout elements at runtime. DOWNLOAD An Android Guide : These Are The Droids You’re Looking For Learn everything you want to learn about Android, for free! This Android Guide”, by author Matt Smith, is another free manual from MakeUseOf.com. Outlining the ins and outs of Android, this guide covers basic everything from basic usage to rooting your phone, and is a must-have if you use Google’s smartphone OS. Android is among the most influential operating systems crafted this century. Along with iOS, it has paved the way for mobile devices that offer an unprecedented level of functionality.

HowToUse - ksoap2-android - Find out how to use this library in your Android application - A lightweight and efficient SOAP library for the Android platform. My favorites ▼ | Sign in Project Home Downloads Wiki Issues Source Comment by thanhbinh.gd@gmail.com, Apr 8, 2011 nice :) Comment by sow...@gmail.com, Jun 1, 2011 The rise of mobile apps and the decline of the open web — a threat or an over-reaction? As the use of mobile devices continues to climb, the use of dedicated apps is also increasing — but is this a natural evolution, or should we be worried about apps winning and the open web losing? Chris Dixon, a partner with venture-capital firm Andreessen Horowitz, argues in a recent blog post that we should be concerned, because it is creating a future in which the web becomes a “niche product,” and the dominant environment is one of proprietary walled gardens run by a couple of web giants — and that this is bad for innovation. Dixon’s evidence consists in part of two recent charts: one is from the web analytics company comScore, and shows that mobile usage has overtaken desktop usage — an event that occurred in January of this year.