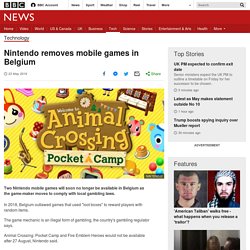 In 2018, Belgium outlawed games that used "loot boxes" to reward players with random items. The game mechanic is an illegal form of gambling, the country's gambling regulator says. Animal Crossing: Pocket Camp and Fire Emblem Heroes would not be available after 27 August, Nintendo said. The decision was due to the "current unclear situation in Belgium regarding certain in-game revenue models", Nintendo said on its Belgian website. Both games let players buy boxes in pursuit of rare items or heroes that help complete the game. Fortnite: Is Prince Harry right to want game banned? Image copyright Getty Images Prince Harry has called for a ban on Fortnite, saying the survival game beloved by teenagers around the world, was "created to addict". 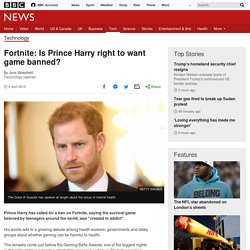 His words add to a growing debate among health workers, governments and lobby groups about whether gaming can be harmful to health. The remarks come just before the Gaming Bafta Awards, one of the biggest nights in the UK's gaming calendar, which take place in London on Thursday evening. Gamers suggest ways to combat addiction.

Image copyright Parliamentlive.tv Gaming "addicts" have been talking to MPs about the dangers of spending too much time online. 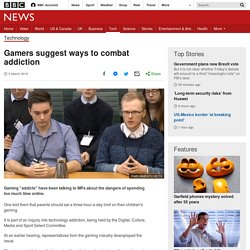 One told them that parents should set a three-hour-a-day limit on their children's gaming. It is part of an inquiry into technology addiction, being held by the Digital, Culture, Media and Sport Select Committee. At an earlier hearing, representatives from the gaming industry downplayed the issue. There is no publicly available content from that meeting but, in written evidence to the committee, the association for UK Interactive Entertainment (Ukie) said there was a "lack of evidence" around the concept of gaming addiction, citing both a UN report and one from the Royal College of Paediatrics and Child Health.

NowThis Future - Parents Sending Kids To Fortnite Rehab. Fortnite addiction sending kids to rehab? The gamer who spent seven years in his dressing gown. Image copyright Fotonow A gamer who left his home fewer than 10 times in seven years explains how he's now helping other young people break away from a life of isolation. 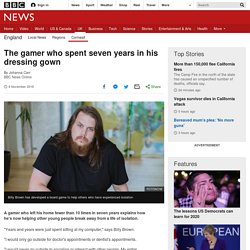 "Years and years were just spent sitting at my computer," says Billy Brown. Josh Bycer's Blog - The Good and Bad of Video Game Addiction. Richard Graham: Why gaming addiction is on the rise. The design of online games has reached a new level of sophistication, appealing to millions of people. 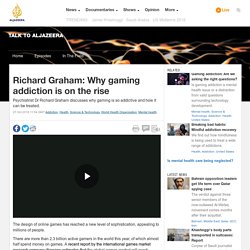 There are more than 2.3 billion active gamers in the world this year, of which almost half spend money on games. A recent report by the international games market research company Newzoo estimates that the global games market will reach $137.9bn in 2018, with digital revenues accounting for 91 percent. As the gaming phenomenon grows, the World Health Organization (WHO) has identified a new disease - gaming disorder. Gaming becomes the latest addiction. Media playback is unsupported on your device The World Health Organisation's classification of gaming disorder as a condition which is capable of debilitating addiction is an important moment in the shifting relationship between technology and society. 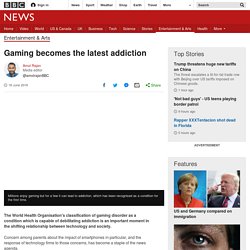 Concern among parents about the impact of smartphones in particular, and the response of technology firms to those concerns, has become a staple of the news agenda. Apple's much covered Digital Health initiative was derided in some quarters, with analysts and punters alike sceptical about the desire of that company to in any way reduce smartphone usage, given its still heavy reliance on smartphones for revenue. And yet the remarks of Tim Cook about his own excessive use of a smartphone shows that the world's richest company, whose value will soon cross $1trn, is alert to the potential harm from smartphone usage.

Image copyright Justin Sullivan/Getty Image copyright Epic Games. Video games are as bad as heroin, according to UK newspaper. UK newspaper The Sun claims Britain is 'in the grip of a gaming addiction,' but a key source from the story says they don't have their facts straight. 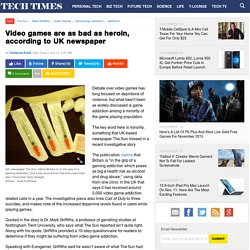 (Photo : Todd Huffman) Debate over video games has long focused on depictions of violence, but what hasn't been as widely discussed is game addiction among a minority of the game playing population. The key word here is minority, something that UK-based newspaper The Sun missed in a recent investigative story. A Quiet Killer: Why Games Are So Addictive. On a Wednesday night in early February 2012, a waitress at a Taiwanese-based internet café made a grim discovery. 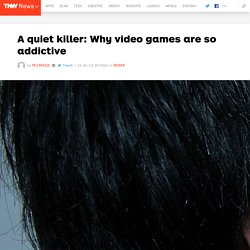 Video game addiction and other Internet compulsive disorders mask depression, anxiety, learning disabilities. Nazra Zahri/Getty Images Video game addiction will be acknowledged for the first time in the updated edition of the American Psychological Association diagnostic manual, DSM-5, out in May. 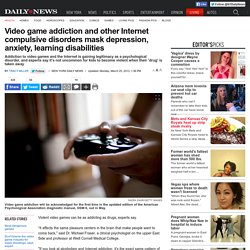 Violent video games can be as addicting as drugs, experts say. “It affects the same pleasure centers in the brain that make people want to come back," said Dr. Michael Fraser, a clinical psychologist on the upper East Side and professor at Weill Cornell Medical College. Video game addiction does it occur if so why. Teen Arrested For Killing Brother Over 'Flappy Bird' Game. CHICAGO – Chicago Teenager arrested of killing his own brother after his brother achieved a higher score on popular game ‘Flappy Bird’. 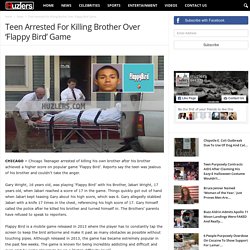 Reports say the teen was jealous of his brother and couldn’t take the anger. Gary Wright, 16 years old, was playing ‘Flappy Bird’ with his Brother, Jabari Wright, 17 years old, when Jabari reached a score of 17 in the game. Ohio Teen Convicted of Killing Mother Over Video Game. A judge Monday rejected the defense that a teenage boy opened fire on his family because he was addicted to video games, convicting him of wounding his clergyman father and killing his mother after they fought over a video game.

Lawyers for Daniel Petric, 17, didn't contest that the boy shot his parents in October 2007, but insisted his youth and video game addiction made him less responsible. But Common Pleas Judge James Burge disagreed and pointed to evidence the boy plotted the crime for weeks. Petric was convicted of aggravated murder, attempted aggravated murder and other charges. Chinese 16-year-old allegedly murders roommate after losing League of Legends match. Games can be a source of joy and an escape, but they can also be an immense frustration. That’s especially true of games like League of Legends, where ragers and toxic teammates can make the experience of a loss even less pleasant.

But several days ago, one Chinese student in Chenzhou took an LoL loss way too hard and reacted by doing something that few of us would ever even contemplate: murdering his roommate and friend. The two boys in question were 16-year-old Liu Kai and his 18-year old roommate Li Bo—both names have been changed to protect their true identities—students and roommates at Chenzhou Vocational Technical College. Chinese father hires virtual hitman to 'kill' son in online games - so he will get a job. The father paid better players to hunt son's avatarHe hoped his unemployed son would then get bored and find work By Becky Evans Published: 08:52 GMT, 8 January 2013 | Updated: 09:29 GMT, 8 January 2013.

Chinese online gamer dies after three-day session. A Chinese man has died after a three-day online gaming session in which he did not sleep and barely ate, reports say. The man reportedly lost consciousness at an internet cafe on the outskirts of the Chinese capital, Beijing. He was rushed to a clinic but could not be revived, the Beijing Times said. The 30-year-old man, who was not identified, was said to have spent more than 10,000 yuan ($1,500; £928) on gaming in the month before his death. China has more than 450 million internet users, and online games - which can involve multiple users role-playing in a virtual world - are particularly popular with young men. Researchers say tens of millions of Chinese people - many of them teenagers - are addicted to internet gaming, despite curbs introduced by the authorities aimed at tackling the problem.

Similar deaths have occurred in other nations. People Who Died Playing Video Games. In 2007, a 26-year-old man, surnamed Zhang, from Northeast China, died of heart failure after a week-long marathon of online gaming during a national holiday. Which really, whenever there actually is a national holiday anywhere in the world, before we make our "outside" plans, we, as a society, make our gaming plans. This guy planned his weekend right. He just wasn't really "in the right shape" to do it.

Yes, you do need to be "in shape" to marathon game like this. Confessions of a video games addict. Soon, the games started to take over. I really found it hard to do anything else. By the time Xbox Live came out, many of us were completely hooked. South Korea Gaming Curfew to Battle Video-Game Addiction. Ever since Yoon Hyuk-joo, a 16-year-old in Seoul, started playing the popular computer game StarCraft eight years ago, studying has taken the backseat. South Korea couple tried over dead 'web neglect' baby. A South Korean couple have gone on trial charged with allowing their baby daughter to starve to death while they played an online computer game.

Prosecutors said they fed the baby once a day and left her alone for hours while they visited internet cafes. S Korean dies after games session. A South Korean man has died after reportedly playing an online computer game for 50 hours with few breaks. The 28-year-old man collapsed after playing the game Starcraft at an internet cafe in the city of Taegu, according to South Korean authorities. Gaming to death: What turns hobby into health hazard? While these cases are extremely rare, it does beg the question of why gaming can lead to such excessive behavior.

How Video Game Addiction Can Destroy Your Life. The withdrawal made Brett want to die. The psychology of video game addiction. "I would not inflict this game upon anyone" was the testimony of a gamer codenamed Leo as he looked into the camera, his left cheek illuminated, offscreen, by a computer monitor. He was speaking about World of Warcraft, the notorious poster boy of the gaming industry, and, later in the documentary, he'd reveal why: 12 hours a day at a computer screen, sometimes more.

No money, no education, no life. Signs and Symptoms of Video Game Addiction – Causes and Effects. Although it is not yet recognized by the American Medical Association as a diagnosable disorder, video game addiction is a very real problem for many people. According to the University of New Mexico, recent studies suggest that 6 to 15 percent of all gamers exhibit signs that could be characterized as addiction. Though this disorder can have significant consequences to those suffering from it, its signs and symptoms can sometimes be very difficult to recognize.