Learning To Fly. Loki knew of the tower, of course: where the frost giant sorcerer Ymir had been imprisoned, after Odin had defeated him. 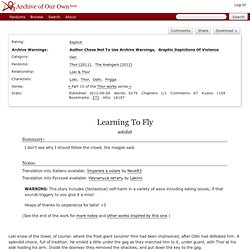 FILL Comfort. How To Use Yourself. Ashes to Ashes (Already Dead Loki) ROUND 13 IS NOW CLOSED - Post new prompts to Round FourteenWelcome to norsekink! 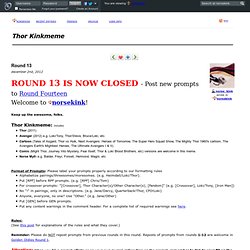 Keep up the awesome, folks. Thor Kinkmeme: includes Thor (2011) Avenger (2012) e.g. Loki/Tony, Thor/Steve, Bruce/Loki, etc.Cartoon (Tales of Asgard, Thor vs Hulk, Next Avengers: Heroes of Tomorrow, The Super Hero Squad Show, The Mighty Thor 1960's cartoon, The Avengers Earth's Mightiest Heroes, The Ultimate Avengers I & II)Comic (Might Thor, Journey Into Mystery, Fear Itself, Thor & Loki Blood Brothers, etc) versions are welcome in this meme.Norse Myth e.g. Reminder: Please do NOT repost prompts from previous rounds in this round. Attention: When you fill a prompt offsite or on your own journal rather than on the prompt, remember to link to your fill on the prompt so that the OP can find it. NEW RULE: Feb 22, 2013Hijacking prompts: If you are inspired by a prompt and would like to discuss it in more detail please take the discussion to the discussion post. Wandering Child (MANY Warnings) Lost Boys. Chapter 1 Please read the Authors note at the end! 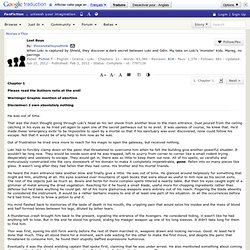 Warnings! Graphic mention of abortion Disclaimer: I own absolutely nothing He was out of time. That was the main thought going through Loki's head as his lair shook from another blow to the main entrance. Out of frustration he tried once more to reach for his magic to open the gateway, but received nothing. Loki had to forcibly clamp down on the panic that threatened to overcome him when he felt the building give another powerful shudder. He heard the main entrance take another blow and finally give a little. His mind flashed back to memories of the taste of death in his mouth, the crippling pain that would seize his insides and the mess of blood and half formed bones between his legs, diluted by bitter tears. FILL Abusive!Odin Protective!Thor. Peel The Pain Away Prologue (MANY Warnings) Continued (Same Warnings) Freefall (Suicide Attempt) Chapter Text Thor swings Mjolnir, and the Bifrost cracks beneath him. 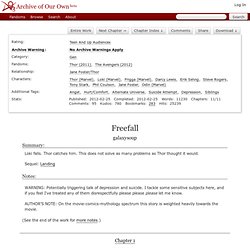 His heart cries out at breaking his promise to Jane and at the destruction of something so beautiful, but his resolve is strong and his duty is clear. He wields Mjolnir again and the Bifrost shatters. Behind him, Loki’s cry of dismay is drowned out as the force of Thor’s blow thunders around them. Thor and Loki are both tumbled about like so many children’s toys, and then the rush of aether out into the blackness of the cosmos drags them towards the edge. There is the heavy thud of boots on the bridge behind them, and Thor knows without looking that it is Odin All-Father. Landing (Sequel to Freefall) Chapter Text Thor finally locates his brother in one of the mansion’s little-used rooms, seated by the window. 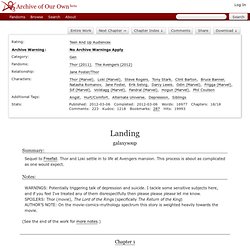 He has his legs pulled up and a mug of tea clutched in both hands, his attention focused on the scene outside. Thor enters quietly. He is certain that his brother is deep enough in thought that Thor’s normally exuberant approach will not disturb him, but he is loath to intrude on this calm place that Loki has found. Slow Poison (EXTREME Self-Esteem Issues) Chapter Text The golden palace at Asgard is all in a bustle, for a new delegation has just arrived from Svartalfheim. 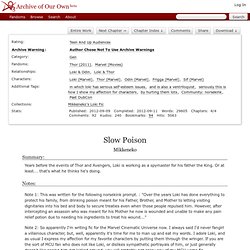 Tensions have run high with the dark elves lately, and it is widely known that Odin hopes to resolve things through diplomacy, rather than force of arms. A pitched battle now would devastate two realms, not just one; and although hotheads from both sides are eager enough in their calls to battle, so far wiser heads have prevailed. So far. But the dark elves have sent a new delegation, rich with lavish presents for the rulers of Asgard and laden with profuse apologies for the recent incidents.

The heavy door swings shut, reinforced with bars of iron, and heavy bolts drop into place. In the stillness, movement: the air ripples, and then a shadow separates from the ceiling and drops lightly to soft-shod feet. Loki Odinsson approaches the pile of treasure, casting his gaze over it with a cynical eye. And they had intended to set this on his mother. Creeping Ice (Loki thinks he's unimportant)

Chapter Text Looking back it was obvious that Loki would be able to find a way into Weapons Vault. 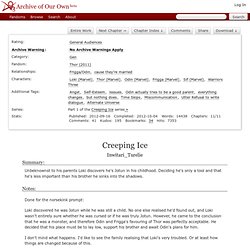 After all Thor had managed it and Loki was obviously cleverer than Thor. That was why Loki had refused to help Thor when his brother decided to go before. For all it might look like it Loki doesn't actually like getting into trouble but sometimes it's worth it. Going into the Weapons Vault definitely wasn't. That Thor ignored him isn't that surprising but if Thor wanted to put himself in danger that was his brother's choice.