Violent brother with drug addiction. Son Pawned Everything! God forgive me but I never want to see my son again, he's lucky I didn't have him arrested and maybe I should have. 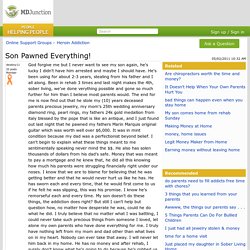 He's been using for about 2-3 years, stealing from his father and I all along. Been in rehab 3 times and last night makes the 4th, sober living, we've done verything possible and gone so much further for him than I believe most parents would. The end for me is now find out that he stole my (10) years deceased parents precious jewelry, my mom's 25th wedding anniversary diamond ring, pearl rings, my fathers 24k gold medallion from italy blessed by the pope that is like an antique, and I just found out last night that he pawned my fathers Marin Marquis original guitar which was worth well over $6,000.

It was in mint condition because my dad was a perfectionist beyond belief. I can't begin to explain what these things meant to me sentimentally speaking never mind the $$. "One Day at a Time" Susan. Friends and Family of Substance Abusers - SoberRecovery : Alcoholism Drug Addiction Help and Information. For Parents of Addicts - SoberRecovery : Alcoholism Drug Addiction Help and Information. CDC - FASD, Facts about FASDs - NCBDDD. Fetal alcohol spectrum disorders (FASDs) are a group of conditions that can occur in a person whose mother drank alcohol during pregnancy. 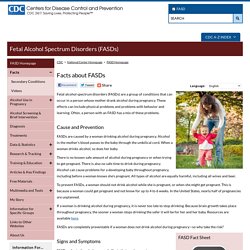 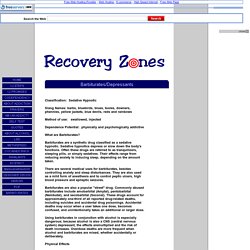 Barbiturates are a synthetic drug classified as a sedative hypnotic. There are several medical uses for barbiturates, besides controlling anxiety and sleep disturbances. Barbiturates are also a popular "street" drug. Using barbiturates in conjunction with alcohol is especially dangerous; because alcohol is also a CNS (central nervous system) depressant, the effects aremultiplied and the risk of death increases.

Physical Effects The effects of barbiturates are much like the effects of alcohol. Effects of prescribed doses of short-acting barbiturates such as secobarbital generally last 4 - 6 hours while effects from phenobarbital, a longer-acting barbiturate will last from 8 -12 hours. Psychological Effects Signs and Symptoms. Alcohol-related neurodevelopmental disorder - definition of Alcohol-related neurodevelopmental disorder in the Medical dictionary - by the Free Online Medical Dictionary, Thesaurus and Encyclopedia. Fetal Alcohol Syndrome Definition Fetal alcohol syndrome (FAS) is a pattern of birth defects, learning, and behavioral problems affecting individuals whose mothers consumed alcohol during pregnancy. 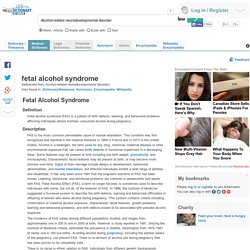 There is no racial or ethnic relation to FAS. Causes and symptoms. Addiction to Drugs: 41 year old drug addict living in parent garage, drug addict, aa meetings. Expert: Peter L. - 4/18/2011 QuestionQUESTION: For a few years now I have been attempting to convince my husband and his family to do something about my brother in law. 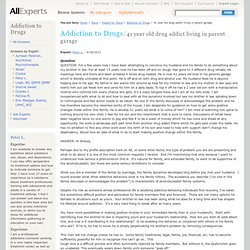 For at least 15 years now he has been off and on drugs. Has gone to 3 different drug rehabs, AA meetings here and there and been arrested 4 times drug related. He is now 41 years old lives in his parents garage which is literally unlivable at this point. An-addict-with-friends. Orange Papers. AA: Cult or Cure? Table of Contents. Second Edition Revised & Expanded by Charles Bufe See Sharp Press Tucson, Arizona 1998. 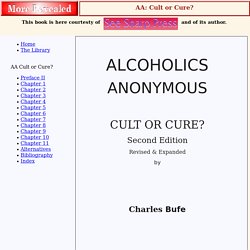 The Ever-Changing Thought. I’ve been debating this for some time. 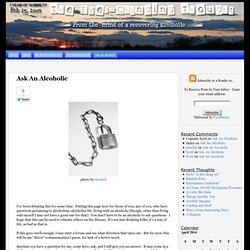 Putting this page here for those of you, any of you, who have questions pertaining to alcoholism, alcoholics life, living with an alcoholic (though, other than living with myself I may not have a good one for that). You don’t have to be an alcoholic to ask questions. I hope that this can be used to educate others on the disease. It’s not just drinking folks, it’s a way of life, as bad as that is. If this goes swell enough, I may start a forum and see what direction that takes me.

Erowid. Top 10 Great Things About Being Addicted. Here at All About Addiction we keep talking about fixing addiction and treating addiction given the suffering that addicts go through. 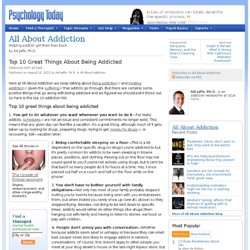 But there are certainly some positive things that go along with being addicted and we figured we should point those out. SO here is the top 10 addiction list: 1. —For many addicts, schedules are not an issue and consistent commitments no longer exist. This means that any given day can feel like a vacation. Deprogramming from Alcoholics Anonymous. Addiction Inbox.