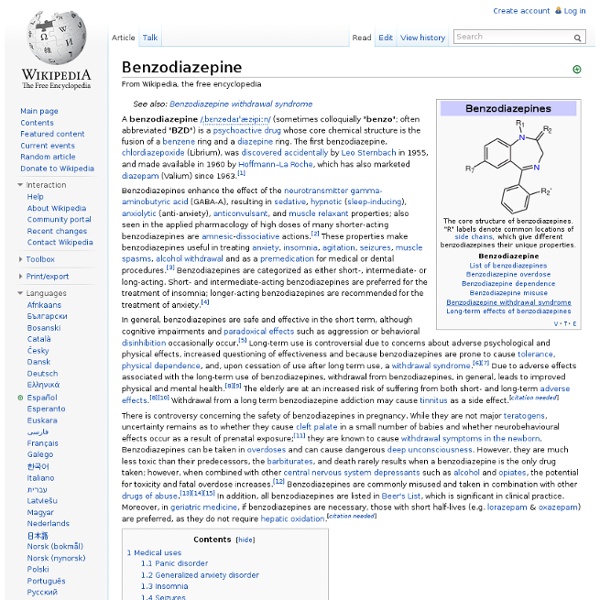 A benzodiazepine /ˌbɛnzɵdaɪˈæzɨpiːn/ (sometimes colloquially "benzo"; often abbreviated "BZD") is a psychoactive drug whose core chemical structure is the fusion of a benzene ring and a diazepine ring. The first such drug, chlordiazepoxide (Librium), was discovered accidentally by Leo Sternbach in 1955, and made available in 1960 by Hoffmann–La Roche, which has also marketed the benzodiazepine diazepam (Valium) since 1963.[1] In general, benzodiazepines are safe and effective in the short term, although cognitive impairments and paradoxical effects such as aggression or behavioral disinhibition occasionally occur. A minority react reverse and contrary to what would normally be expected. There is controversy concerning the safety of benzodiazepines in pregnancy. Medical uses[edit] Panic disorder[edit] Benzodiazepines are usually administered orally; however, very occasionally lorazepam or diazepam may be given intravenously for the treatment of panic attacks.[17] Insomnia[edit] Related:  Health and Nutrition

Pulmonary embolism Blockage of one or more of the arteries to the lungs typically by a blood clot which has traveled from elsewhere in the body PE usually results from a blood clot in the leg that travels to the lung.[6] The risk of blood clots is increased by cancer, prolonged bed rest, smoking, stroke, certain genetic conditions, estrogen-based medication, pregnancy, obesity, and after some types of surgery.[3] A small proportion of cases are due to the embolization of air, fat, or amniotic fluid.[11][12] Diagnosis is based on signs and symptoms in combination with test results.[4] If the risk is low, a blood test known as a D-dimer may rule out the condition.[4] Otherwise, a CT pulmonary angiography, lung ventilation/perfusion scan, or ultrasound of the legs may confirm the diagnosis.[4] Together, deep vein thrombosis and PE are known as venous thromboembolism (VTE).[13] Signs and symptoms[edit] On physical examination, the lungs are usually normal. Risk factors[edit] Underlying causes[edit] Imaging[edit]

Ageing Aging or ageing (see spelling differences) is the process of becoming older. The term refers especially to human beings, many animals, and fungi, whereas for example bacteria, perennial plants and some simple animals are potentially biologically immortal. In the broader sense, aging can refer to single cells within an organism which have ceased dividing (cellular senescence) or to the population of a species (population ageing). In humans, aging represents the accumulation of changes in a human being over time, encompassing physical, psychological, and social changes. The causes of aging are uncertain; current theories are assigned to the damage concept, whereby the accumulation of damage (such as DNA oxidation) may cause biological systems to fail, or to the programmed aging concept, whereby internal processes (such as DNA methylation) may cause aging. Aging versus immortality[edit] Effects[edit] Biological basis[edit] 95-year-old woman holding a five-month-old boy Programmed factors[edit]

Keith Taggart Age: 63Oklahoma City, Oklahoma Two years after being diagnosed with salivary gland cancer, I was told surgery could no longer keep the cancer at bay because it had spread throughout my body. I was offered a choice between chemotherapy, which might get me three or four more weeks of life, or a clinical trial testing a new targeted treatment. I was diagnosed with salivary gland cancer in October 2014. An appointment with a surgeon here in Oklahoma City reassured me. It didn’t work out like that. I had more surgery to remove those tumors. At this point, I turned to The University of Texas MD Anderson Cancer Center for treatment. Again, this did not control the cancer. After the cruise, things changed quickly. After taking a single larotrectinib pill twice a day for just four days, the tumors in my neck, face, and chest had shrunk so much I could no longer feel them. I will keep taking larotrectinib as long as it keeps my cancer away. Top of page

Mark Hyman (doctor) — (2005). Ultraprevention: The 6-week plan that will make you healthy for life. New York: Atria Books. ISBN . OCLC 57448242.— (2007). Functional medicine Alternative medicine and pseudoscience Functional medicine is a form of alternative medicine that encompasses a number of unproven and disproven methods and treatments.[1][2][3] Its proponents claim that it focuses on the "root causes" of diseases based on interactions between the environment and the gastrointestinal, endocrine, and immune systems to develop "individualized treatment plans".[4] It has been described as pseudoscience,[5] quackery,[6] and at its essence a rebranding of complementary and alternative medicine.[6] In the US, functional medicine practices have been ruled ineligible for course credits by the American Academy of Family Physicians because of concerns they may be harmful.[7][8] Description[edit] Treatments, practices, and concepts will generally be those not supported by medical evidence.[1] Institute for Functional Medicine[edit] Reception[edit] References[edit] Further reading[edit]

Functional Medicine (FM) What Is It? Functional Medicine – What is it? After extensive searching and examination, my answer is still – only the originators of “FM” know. Or, at least one must assume they know, because so far as I can see, I certainly see nothing that distinguishes “FM” from other descriptions of sectarian and “Complementary/Alternative Medicine” practices. A difference may lie in the advocates’ assumptions to have found some “imbalance” of body chemistry or physiology before applying one or more unproved methods or substances. From what I could determine, the “imbalance” or dysfunction is usually either imaginary or at least presumptive. I figured there would be several ways to find out. On the Web page (Institute for Functional Medicine), one finds the following: Functional medicine is personalized medicine that deals with primary prevention and underlying causes instead of symptoms for serious chronic disease. Stop here. “Organ reserve?” Stop here.

Coronavirus Map: Tracking the Spread of the Outbreak Why the New Coronavirus (Mostly) Spares Children The new coronavirus has infected nearly 90,000 people, and more than 3,000 have died. But relatively few children appear to have developed severe symptoms so far, according to available data. “Disease in children appears to be relatively rare and mild,” with those under 19 years making up only 2.4 percent of the total cases, according to a report published Feb. 28 by the World Health Organization. So why aren’t more children getting sick? “My strong, educated guess is that younger people are getting infected, but they get the relatively milder disease,” Dr. Malik Peiris, chief of virology at the University of Hong Kong, said last month. The numbers so far support that theory: According to the W.H.O., only 2.5 percent of those under 19 have developed severe disease and only 0.2 percent had critical disease. Scientists may not be seeing more infected children because “we don’t have data on the milder cases,” Dr. “Something happens at age 50,” Dr.

uber-facts I am in no way, shape, or form a specimen of great health or physical fitness, but I will say that I try to go to the gym most days just so I can get my heart rate up and those endorphins flooding my brain. If I do, I just feel better about everything – I get more work done, I’m in a way better mood, and I sleep better, too. It turns out there are a lot of hidden benefits to exercising regularly, as health psychologist and author Kelly McGonigal expounds upon in her new book: The Joy of Movement: How Exercise Helps Us Find Happiness, Hope, Connection, and Courage. McGonigal argues that there are a lot of great things that come out of exercising besides trying to look better and losing weight – those things can be important goals, of course, but there’s a lot more to it than that. Regular exercise can literally give us hope and a sense of purpose. It makes us happier and gives us greater overall satisfaction in life. McGonigal says, “These benefits are seen throughout the life span. 1.