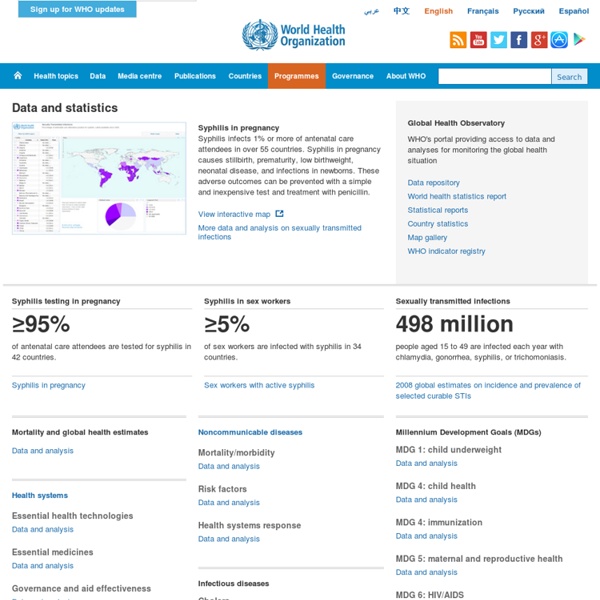 Syphilis in pregnancy Syphilis infects 1% or more of antenatal care attendees in over 55 countries. Syphilis in pregnancy causes stillbirth, prematurity, low birthweight, neonatal disease, and infections in newborns. These adverse outcomes can be prevented with a simple and inexpensive test and treatment with penicillin.

Drug overdose epidemic to recede soon, study claims A study by researchers at Columbia University’s Mailman School of Public Health is the first to apply Farr’s Law on the rise and fall of epidemics to an outbreak that isn’t, strictly speaking, infectious in origin: drug overdoses. At present, more than 40,000 Americans die every year by unintentional drug overdose–a number that has ballooned tenfold since 1980. In a study of smallpox in the mid-1800s, pioneering British epidemiologist William Farr discovered that the rate and duration of the epidemic’s rise was mirrored in its decline. Using Farr’s Law, the Mailman School researchers project that the drug overdose epidemic will peak at about 50,000 annual deaths in 2017 before declining to a non-epidemic state of approximately 6,000 deaths in the year 2035–at roughly the same rate seen before the start of the epidemic. Results appear online in the journal Injury Epidemiology.

Publications CIA Resources Below are three of the CIA's most popular resources: The World Factbook, Maps at CIA and information about world leaders in the directory of Chiefs of State and Cabinet Members of Foreign Governments. Historical Collection Publications Data Marketplace It takes a lot of data of all kinds to add up to Big Data. That's why we've assembled this awesome collection of datasets and streams for data scientists and developers to sample, experiment with and use to create awesome analytics and applications. Whether you need to tap into social, geo or other kinds of data we've got just what you need. agebirthscensuscharacterchemistrycommoditiescorporadeathdemographicsdemographicseconomicsemploymentfootballgeonamesgovernmenthealthhealthhousingincomelanguagelanguagelawliteraturelocationslongitudemapsmusicnationalpollutionpopulationsciencesciencesize-largesocialsocialspendingsportsstatisticssurveytwitterwordzipcode

Correctional Facility Substance Abuse Programs For many years, SMART Recovery has worked with correctional institutions throughout the United States to help provide SMART Recovery meetings for inmates as well as support meetings for those returning to communities. Depending on circumstances, your facility may choose either to provide InsideOut to your population, or you may choose to provide a “general” SMART Recovery meeting. Our FAST Distance Training Program helps prepare counselors, officers and drug court officials to facilitate general SMART Recovery meetings. Information about making the InsideOut program available to your clients is included below. SMART Recovery materials work equally well with male and female populations, work to lower recidivism rates, and provide a non-religious based choice in recovery, which is crucial to ensuring First Amendment rights are observed.

ited Nations Office of Internal Oversight Services Activities Internal Audit Investigations Inspection & Evaluation drug overdose Archives It seems as if there has been a lot of drug overdose deaths this holiday season, and although it’s not a nice thought to think about, the number of drug overdoses has been growing. Unfortunately, five tri-state residents will not survive the holidays due to lethal drug overdose deaths…. Read more In this article, you will learn what the signs and symptoms of a drug overdose are, and how all of this can be prevented with one simple step. In a recent article, we shared with you the signs of addiction, and knowing what to look for.

United Nations confidential reports From WikiLeaks January 14, 2008 Wikileaks staff writers Wikileaks has released 70 United Nations investigative reports classified "Strictly Confidential". Dramatic Increases in Maternal Opioid Use and Neonatal Abstinence Syndrome Skip to main content En español Home » Related Topics » Trends & Statistics » Infographics » Dramatic Increases in Maternal Opioid Use and Neonatal Abstinence Syndrome Access Data Featured Products World Ocean Database The World Ocean Database (WOD) provides access to scientifically quality-controlled global ocean profile and plankton data that includes measured in situ variables gathered since 1773. What It's Like to Keep Falling in Love with Heroin Addicts This piece was published in partnership with The Influence. Four months ago, I dropped my boyfriend James* off at rehab—the same rehab I took my first boyfriend to ten years before. While James filled out paperwork and spoke with counselors, I worried that his insurance would only cover the five-day detox that never worked for him. I worried that he would die. It was terrifying, yet familiar. I'm 27.

• WHO IS JOHN DOE -- and where to get the paper on him John Doe. . . . . . >>> leaves a trail in the deep Web >> www.pipl.com searches by name, email, username and telephone >> snitch.name searches social sites. Watch Full Episodes Online of FRONTLINE on PBS Use one of the services below to sign in to PBS: You've just tried to add this video to your Watchlist so you can watch it later. But first, we need you to sign-in to PBS using one of the services below. You’ll be able to manage videos in your Watchlist, keep track of your favorite shows, watch PBS in high definition, and much more!

International Programs - International Statistical Agencies <p>This Javascript allows the page in IE to resize to the minium width of 783 pixels and no less.</p> Skip top of page navigation You are here: Census.gov › People and Households › International Programs Main › Related Sites › › International Statistical Agencies Ithaca Mayor wants managed heroin injection facility ALBANY, N.Y. (AP) - The mayor of Ithaca wants his city to host the nation's first supervised injection facility, where heroin users would be able to shoot illegal drugs into their bodies under the care of a nurse without getting arrested by police. Canada, Europe and Australia are working to reduce overdose deaths with these facilities, but in the United States, even the idea of creating supervised injection sites faces significant legal and political challenges.