Gut feelings: the future of psychiatry may be inside your stomach 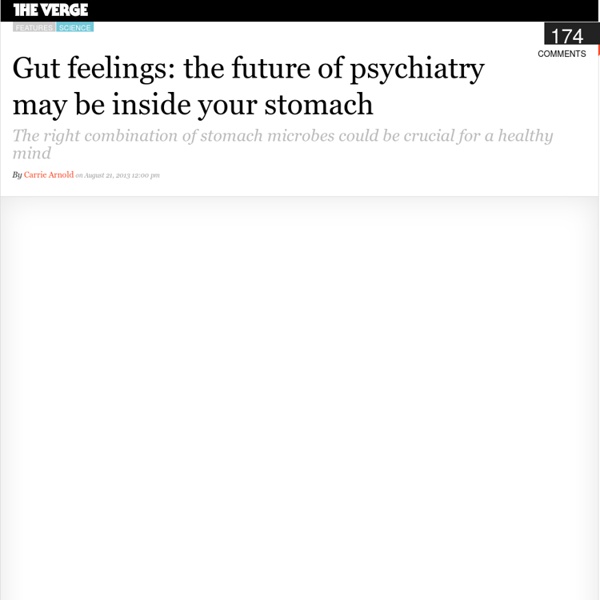 Her parents were running out of hope. Their teenage daughter, Mary, had been diagnosed with a severe case of obsessive–compulsive disorder (OCD), as well as ADHD. They had dragged her to clinics around the country in an effort to thwart the scary, intrusive thoughts and the repetitive behaviors that Mary felt compelled to perform. Their last hope for Mary was Boston-area psychiatrist James Greenblatt. Greenblatt started by posing the usual questions about Mary’s background, her childhood, and the onset of her illness. That’s what prompted Greenblatt to take a surprising approach: besides psychotherapy and medication, Greenblatt also prescribed Mary a twice-daily dose of probiotics, the array of helpful bacteria that lives in our gut. Her parents may have been stunned, but to Greenblatt, Mary’s case was an obvious one. Greenblatt’s provocative idea — that psychiatric woes can be solved by targeting the digestive system — is increasingly reinforced by cutting-edge science. Read next: Related:  Mental Health News

Health - Why feeling more pain may be better for you Psychology studies show painful experiences aren’t dictated by how long they go on for, and this could teach us an important lesson about everything from hospital operations to holidays, says Tom Stafford. When is the best treatment for pain more pain? When you're taking part in an experiment published by a Nobel prize winner and one of the leading lights in behavioural psychology, that is. The psychologist in question is Daniel Kahneman; the experiment described by the self-explanatory title of: When More Pain Is Preferred to Less: Adding a Better End. Both trials were equally painful for the first sixty seconds, as indicated by a dial participants had to adjust to show how they were feeling. Next, the experimenters asked participants which kind of trial they would choose to repeat if they had to. These studies support what Kahneman called the Peak-End rule – that our perceptions about an experience are determined by how it feels at its most intense, and how it feels at the end.

Low Sodium Sodium Recommendations According to the FDA, a low-sodium food contains 140 mg or less of sodium. Those on low-sodium diets should limit sodium intake to between 500 mg to 1500mg daily. Those watching their sodium intake should also monitor the fat, saturated fat and cholesterol levels they consume. Even those that don’t suffer from high blood pressure of hypertension should consider reducing sodium intake. Look below to find ideas for delicious low-sodium meals.

(410) Timeline Photos Atul Gawande: How Do Good Ideas Spread? Why do some innovations spread so swiftly and others so slowly? Consider the very different trajectories of surgical anesthesia and antiseptics, both of which were discovered in the nineteenth century. The first public demonstration of anesthesia was in 1846. The Boston surgeon Henry Jacob Bigelow was approached by a local dentist named William Morton, who insisted that he had found a gas that could render patients insensible to the pain of surgery. That was a dramatic claim. In those days, even a minor tooth extraction was excruciating. On October 16, 1846, at Massachusetts General Hospital, Morton administered his gas through an inhaler in the mouth of a young man undergoing the excision of a tumor in his jaw. Four weeks later, on November 18th, Bigelow published his report on the discovery of “insensibility produced by inhalation” in the Boston Medical and Surgical Journal. There were forces of resistance, to be sure. Sepsis—infection—was the other great scourge of surgery.

MSG and gluten intolerance: Is the nocebo effect to blame? Photo by Marina Helli/AFP/Getty Images While living in China from 2003 to 2005, I often served as the designated translator for fellow expatriates. Whenever we ate out, this involved asking our server which menu items contained MSG. Invariably I was told that almost everything is made with weijing (“flavor essence”), including, on one occasion, the roast peanut appetizer my MSG-sensitive friends were snacking on as I made my inquiry. After observing that no one reacted to the peanuts, I was inspired to conduct a simple (and admittedly unethical) experiment. One evening, instead of translating honestly, I told my companions at a large banquet that the kitchen had promised to avoid using MSG. An hour later? I repeated this experiment on multiple occasions, always with the same result. An editor at NEJM titled Kwok’s letter “Chinese-restaurant syndrome,” and thus began a minor epidemic. But after reading some of these studies, even a layperson will start to get suspicious. Not so fast.

Ten Worst and Best Foods Do you want to know the best super foods to eat, for your better health? How to eat right by knowing — with candid and reliable information — what foods to eat regularly, so you are empowered to improve your overall health? Do you ever ask yourself “What should I eat?” Or “How can I choose a healthier diet?” Well, now you can have the latest life-saving information about the foods you eat, because NutritionAction.com’s scientists and nutritionists tell you exactly what’s right — and what’s wrong — with hundreds of foods. Dear health-conscious consumer, Scientific research has proven the relationship between diet and disease. That’s exactly why you should learn what is best to eat. This special free health advice has been compiled especially for you by our expert staff of scientists and nutritionists, so eating the best foods is as easy as buying what’s best in the supermarket. Sweet potatoes top the list of best foods, but why? Act now to get your free health advice about what to eat.

13 Lies GMO Labeling Opponents are Recycling in Washington State It’s déjà vu all over again. Last year a coalition of out-of-state, multinational biotech, pesticide and junk food corporations spent nearly $46 million to narrowly defeat Proposition 37, California's GMO Labeling Initiative. Now, the same who’s who of the world’s most notorious global corporate bad actors has descended on Washington State. Why? To try to stop Washington State voters from passing I-522, a citizens’ initiative that, if passed, will require mandatory labeling of genetically modified organisms (GMOs) in all food products sold in Washington State. Like bad robots, they’re spitting out the same old, tired lies, designed to scare voters into voting against their own best interests. Here are the lies. Lie: Labeling genetically engineered foods (GMOs) will cost taxpayers millions of dollars a year. Truth: Empirical studies have concluded labeling would lead to no increases in prices. Lie: I-522 is full of arbitrary special interest exemptions that will just confuse consumers.

The decline effect and the scientific method On September 18, 2007, a few dozen neuroscientists, psychiatrists, and drug-company executives gathered in a hotel conference room in Brussels to hear some startling news. It had to do with a class of drugs known as atypical or second-generation antipsychotics, which came on the market in the early nineties. The drugs, sold under brand names such as Abilify, Seroquel, and Zyprexa, had been tested on schizophrenics in several large clinical trials, all of which had demonstrated a dramatic decrease in the subjects’ psychiatric symptoms. As a result, second-generation antipsychotics had become one of the fastest-growing and most profitable pharmaceutical classes. By 2001, Eli Lilly’s Zyprexa was generating more revenue than Prozac. But the data presented at the Brussels meeting made it clear that something strange was happening: the therapeutic power of the drugs appeared to be steadily waning. Before the effectiveness of a drug can be confirmed, it must be tested and tested again.