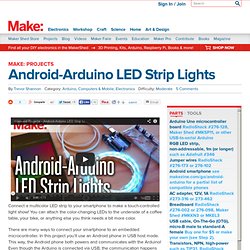 PrevNext RGB LED strips usually have 4 wires: one for power, and one each for red, green, and blue control. When the strip is powered, pulling any of the control lines to ground will cause that color LED to light up at full brightness. Using pulse-width modulation (PWM) on those control lines allows you to modulate the brightness of the lights.A strip 1m long can draw nearly 1A when the red, green, and blue LEDs are on full brightness. Introduction to Arduino  Www.jodyculkin.com/wp-content/uploads/2011/09/arduino-comic-latest1.pdf. Arduino Tutorial - Learn electronics and microcontrollers using Arduino! So, I get two or three emails a day, all basically asking the same thing: "Where can I learn about electronics? 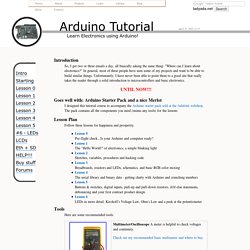 " In general, most of these people have seen some of my projects and want to be able to build similar things. Unfortunately, I have never been able to point them to a good site that really takes the reader through a solid introduction to microcontrollers and basic electronics. I designed this tutorial course to accompany the Arduino starter pack sold at the Adafruit webshop. The pack contains all the components you need (minus any tools) for the lessons Follow these lessons for happiness and prosperity. Lesson 0 Pre-flight check...Is your Arduino and computer ready?

Here are some recommended tools: Curriculum. Transhumanist Appendage Addition Device. The following project was my Final Project for my "Electronics and Robotics" class at San Francisco State University in the "Conceptual Information Arts" department. 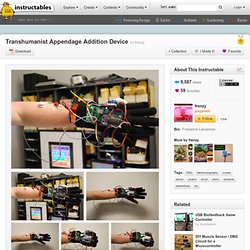 Here is my artist's statement for the piece: ""Primitive Transhumanism #2: Sixth Finger" Glove, Arduino, Code, Electrical Wire, Servo Motor, EMG Sensors, Low-Heat Plastic, Armature Wire, Power Adapter I'm interested in the future of transhumanism especially from a DIY perspective and what the layman can take to mold ones body however they wish. Body liberation will not happen through the corporation, even though it will be the ever arching fight of our times, but these changes may be necessary to keep resisting the status quo in a world of the hyperreal. Taking the ideas of transhumanism and the body as moldable, I use everyday objects to create a primitive transhuman experience, which the viewer can participate. The glove uses my muscle flexing to react and move the motor.

The Lightning Simulator/Breathalyzer/Graphic Equalizer - Arduino Powered. I needed to be able to control each of the 8 LED strips (each strip is 10 feet long) individually. 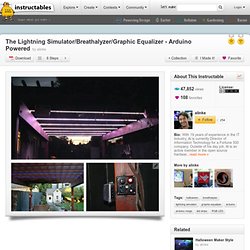 Controlling each LED in the strip individually would have been nice but was not required for this project. After a bit of research, I landed on the folks over at usledsupply.com. Their service was great, they answered all of my questions even the dumb ones in a timely manner. They also did a custom wiring schematic based on my requirements and pre-cut the LED strips to the lengths I needed. The project also needed sound for the Breathalyzer feature as well as some of the other effects, the Adafruit WaveShield fit the bill for this.

RainBoard - RGB LED Rainbow Fader. Before we begin, here is a parts list of everything we will need for this Instructable as well as links to vendors where these items can be obtained. 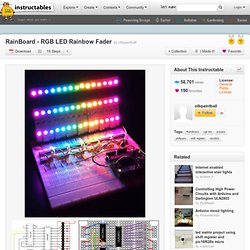 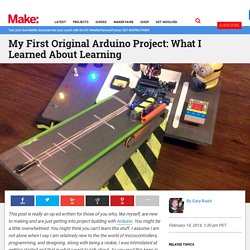 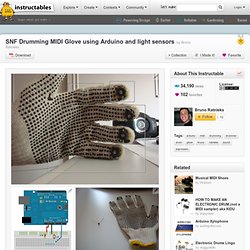 First of all cheers to my supportive lovely family: Betina, Edvins, Vera and Sérgio! I'm Bruno Ratnieks from Brazil and will describe a fun and easy way to build your own sound expression MIDI enabled glove without expending lot's of money on MIDI Interfaces or expensive sensors. Feel free to contact me directly by mail if you like it or have suggestions. Private feedback are welcome by e-mail: mailto:bruno@sniffer.net. Musical MIDI Shoes. Bill of Materials 4 Force Sensitive Resistors A lot of DIY drum pads have been made with piezoelectric transducers, but in my experience these are unreliable at best. 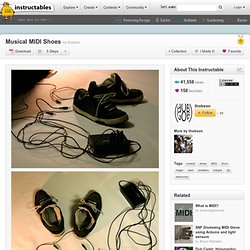 For straight up drum pads they might work ok, but in shoes the sensors are always under a certain amount of pressure, they're not just experiencing brief impacts. Piezos are frustratingly delicate and unpredictable. Arduino Wireless Animatronic Hand. How to hack EEG toys with arduino. How to Build an Arduino Powered Chess Playing Robot. Judging by the sheer number of chess related Instructables, I think it's safe to say the community enjoys the game. 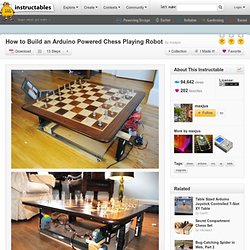 It can be difficult, however, to find someone who plays on the same level you do. To solve this dilemma, and to increase my playing skills, I built this arduino powered chess playing robot. The board works like any other xy table, with a few key differences. Open brain wave interface hardware. Make high quality brain wave interface as low cost and small size is my over 20 years of dream. 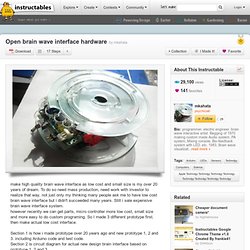 To do so need mass production, need work with investor to realize that way. not just only my thinking many people ask me to have low cost brain wave interface but i didn't succeeded many years. Still i sale expensive brain wave interface system. however recently we can get parts, micro controller more low cost, small size and more easy to do custom programing. So I made 3 different prototype first. then make actual low cost interface.

Power Laces- the Auto lacing shoe. Make Your Own Pocketable Arduino Kit. Palm Arduino Kit. Top 40 Arduino Projects of the Web. IntroArduinoBook.pdf (application/pdf Object) Curriculum - Learn.SFE. How to make your own Arduino board. If your are like me which I am guessing you are, then ever since you got into doing stuff with arduino you have wanted to make your own arduino board. You may be surprised to find out that making the prototyping board is actually very easy, and can have several advantages over using the commercially sold board. For one thing, All the components together cost a little over 15 US dollars as opposed to the $30 that the Uno board sells for. second, you may not actually want a board, but may simply want the atmega chip as the heart of the project, like if you are making a synthesizer or even a robot.

Our ears do it for us, but building an artificial signal processor takes some work. The military has expensive equipment for this, but if you’d like to do it yourself at a low cost, this is for you. The DIY sound localization sensor uses an operational amplifier circuit alongside an Arduino and servo. The circuit amplifies the signal from three microphones, compares their amplitudes, and determines the origin location of the sounds. Popular Audio Projects: Use Google Voice Search through Arduino & Bluetooth. With the launch of Google’s new Voice Search feature on the Chrome browser, you can trust the DIY community to come up with some cool hacks.

The Verbalizer is an Open Source development board based on Arduino which wirelessly communicates with your computer via Bluetooth. Activate it and as usual it opens Google.com in a new tab and starts Voice Search. Audio feedback lets you know that Google is ready for your voice search. Now, you can speak into the mic and see the results of your search. The Verbalizer gives a development platform to geeks to find creative ways to connect to Google’s Voice Search and create hardware to integrate with the platform.

Build Your Own Arduino-Based Laser Clock with a Salad Bowl, Laser Pointers, and Some Spare Time. Arduino. Wi-fi Speakers - Stream Music Anywhere. LED Helmet. Graffiti Printer. How to Start Making Your Own Electronics with Arduino and Other People's Code. Learn Arduino Comic Strip. Everything Worth Knowing About Arduino. Getting Started with Arduino Electronics Hacking.