Interactive Timeline: Everything We Know About Russia and President Trump 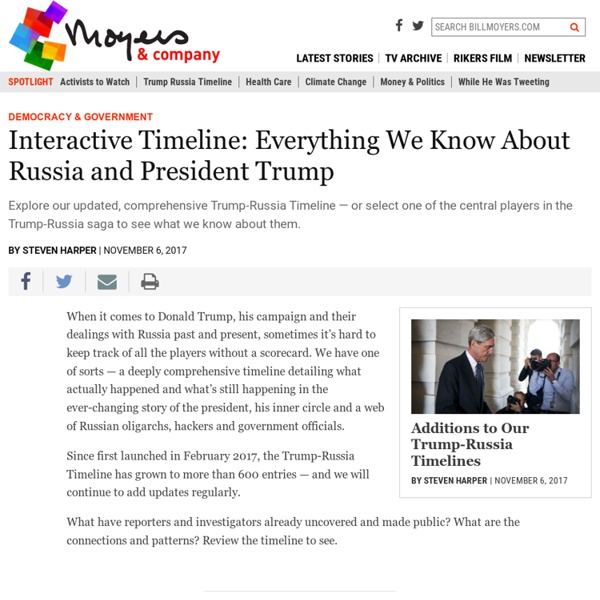 Trump has announced massive aluminum and steel tariffs. Here are 5 things you need to know. President Trump meets with steel and aluminum executives on March 1, 2018. Flanking him, from left, are Roger Newport of AK Steel, John Ferriola of Nucor, Dave Burritt of U.S. Steel and Tim Timken of TimkenSteel.

We now know how the Trump presidency will end. Let's hope we survive: Burman By Tony BurmanForeign Affairs Columnist Thu., Aug. 3, 2017 How will the Donald Trump presidency end? It will end badly, so let me count the ways: 1. America is hurtling towards a constitutional crisis that will rock its institutions to the core. Christopher Steele, the Man Behind the Trump Dossier In January, after a long day at his London office, Christopher Steele, the former spy turned private investigator, was stepping off a commuter train in Farnham, where he lives, when one of his two phones rang. He’d been looking forward to dinner at home with his wife, and perhaps a glass of wine. It had been their dream to live in Farnham, a town in Surrey with a beautiful Georgian high street, where they could afford a house big enough to accommodate their four children, on nearly an acre of land. Steele, who is fifty-three, looked much like the other businessmen heading home, except for the fact that he kept his phones in a Faraday bag—a pouch, of military-tested double-grade fabric, designed to block signal detection.

3 times Trump team changed its story on Russia President Donald Trump and members of his inner circle have played down or outright denied his campaign’s contacts with Russia. Some of those denials are now being proved false. The U.S. intelligence community concluded Moscow interfered with the 2016 election, and Special Counsel Robert Mueller is investigating whether the Trump campaign colluded in Russia’s meddling. Beyond a Reasonable Doubt: Putin Attacked the U.S. Election Beyond a Reasonable Doubt: Putin Attacked the U.S. Election Russia’s interference in the 2016 election has been widely documented but not thoroughly investigated. A congressional investigation of foreign interference is necessary, as is the declassification of what multiple Senators and intelligence officials have deemed “explosive information” concerning threats to the sovereignty and security of the United States. The public has a right to know whether the integrity of our electoral process has been compromised, whether Donald Trump is serving the American people or Russian interests, and whether the institutions that uphold our liberties will continue to do so. I.

Rod Rosenstein Will Decide the Outcome of Mueller's Investigation The latest revelations about President Trump have, once again, excited the interest of the public, leading to speculation that Special Counsel Robert Mueller may have amassed sufficient evidence to charge the president with obstruction of justice. Trump’s attempt to fire Mueller (which happened last June, but is only now being publicly reported) is, under this line of thinking, the final straw. Color me deeply skeptical. Mueller will not indict Trump for obstruction of justice or for any other crime. 'These Are Not The Actions of an Innocent Man' “Every time he sees me he says, ‘I didn’t do that,’ and I really believe that.”—Donald Trump on Vladimir Putin, en route to Hanoi, November 11, 2017. So, to put it bluntly: At this point in the proceedings, there can be no innocent explanation for Donald Trump’s rejection of the truth about Russian meddling in last year’s elections.

Trump Tower meeting with Russians 'treasonous', Steve Bannon says in explosive book Donald Trump’s former chief strategist Steve Bannon has described the Trump Tower meeting between the president’s son and a group of Russians during the 2016 election campaign as “treasonous” and “unpatriotic”, according to an explosive new book seen by the Guardian. Bannon, speaking to author Michael Wolff, warned that the investigation into alleged collusion with the Kremlin will focus on money laundering and predicted: “They’re going to crack Don Junior like an egg on national TV.” Fire and Fury: Inside the Trump White House, reportedly based on more than 200 interviews with the president, his inner circle and players in and around the administration, is one of the most eagerly awaited political books of the year. In it, Wolff lifts the lid on a White House lurching from crisis to crisis amid internecine warfare, with even some of Trump’s closest allies expressing contempt for him.