What does the WHO do, and why has Trump stopped supporting it? What is the World Health Organization’s remit? 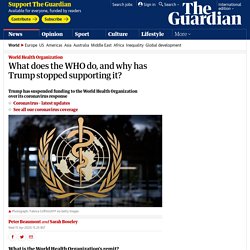 The World Health Organization (WHO) was founded as the UN global health body in 1948 in the aftermath of the second world war with a mandate to promote global health, protect against infectious disease and to serve the vulnerable. It was inspired by the international sanitary conferences of the 19th century set up to combat communicable diseases such as cholera, yellow fever and plague.

Its current programme envisages expanding universal healthcare to a billion more people, protecting another billion from health emergencies and providing a further billion people with better health and wellbeing. What does that involve? Article: World Health Organization Reform: Lessons Learned from the Ebola Epidemic. Successful Ebola responses in Nigeria, Senegal and Mali.

Explicit cookie consent. FOREWARNED, the proverb has it, is forearmed. 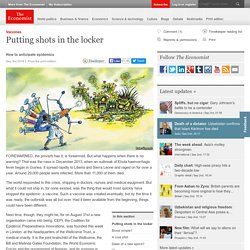 But what happens when there is no warning? That was the case in December 2013, when an outbreak of Ebola haemorrhagic fever began in Guinea. It spread rapidly to Liberia and Sierra Leone and raged on for over a year. Around 29,000 people were infected. More than 11,000 of them died. The world responded to this crisis, shipping in doctors, nurses and medical equipment. Next time, though, they might be, for on August 31st a new organisation came into being. Paradoxically, part of the inspiration for CEPI’s creation was not the failure to deliver an Ebola vaccine in time for it to be useful, but how close that project came to success. Zika And Ebola Are Both Global Health Emergencies, But The Responses Will Look Very Different. No sooner have fears of the Ebola epidemic in West Africa faded from public memory than a new outbreak has risen in its stead: the Zika virus, a mosquito-borne illness that has been associated with an alarming rise in babies with birth defects and neurological problems. 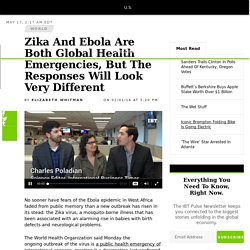 The World Health Organization said Monday the ongoing outbreak of the virus is a public health emergency of international concern, granting it a designation last conferred on the Ebola epidemic, which left more than 11,000 dead and invited blistering criticism of the WHO for failing to respond appropriately. Despite sharing a label, however, the global response to the Zika virus is likely to be very different — and substantially better — than the response to Ebola, experts said. A worker from the Peruvian Health Ministry fumigates various locations in Lima against the Aedes aegypti mosquito, vector of the Zika virus, in Lima, Jan. 30, 2016. Photo: MINSA/Anadolu Agency/Getty Images. Sierra Leone Contains New Threat of Ebola With Lessons Learned. March 2016—With no new reported cases of Ebola, the World Health Organization (WHO) declared West Africa free of the deadly disease on Jan. 14, 2016—a day of joy and celebration for the region. 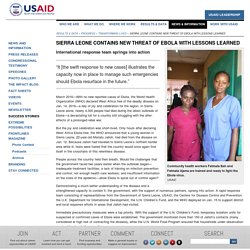 In Sierra Leone alone, nearly 4,000 people had died during the latest outbreak of Ebola—a devastating toll for a country still struggling with the after-effects of a prolonged rebel war. But the joy and celebration was short-lived. Only hours after declaring West Africa Ebola-free, the WHO announced that a young woman in Sierra Leone, 22-year-old Mariatu Jalloh, had died from the disease on Jan. 12. Because Jalloh had traveled to Sierra Leone’s northern border area while ill, fears were fueled that the country would once again find itself in the crosshairs of this relentless disease. People across the country held their breath. Immediate precautionary measures were a top priority. IHR Global Outbreak Alert and Response Network respond. International Health Regulations (2005) Article: Lessons from Ebola bring WHO reforms. Article: Will Ebola change the game? Ten essential reforms before the next pandemic. The report of the Harvard-LSHTM Independent Panel on the Global Response to Ebola.

This article reports the findings of the Harvard Global Health Institute and the London School of Hygiene & Tropical Medicine's joint Independent Panel on the Global Response to Ebola, which included panel members from academia, think tanks, and civil society. It presents an analysis of failures at each stage of the epidemic and proposes recommendations to address these failures in order to avoid repeating the same mistakes in future. Recommendations are made for WHO, UN, nation states and funding organisations. – mcquillan_ruth

Article: A plan to protect the world—and save WHO. Global health security: the wider lessons from the west African Ebola virus disease epidemic. Article: In Search of Global Health Justice: A Need to Reinvigorate Institutions and Make International Law. Article: WHO “should focus on core activities” in light of problems over Ebola response. Article: The normative authority of the World Health Organization. Article: A retrospective and prospective analysis of the west African Ebola virus disease epidemic: robust national health systems at the foundation and an empowered WHO at the apex. Article: Critical choices for the WHO after the ebola epidemic. Report of the Ebola Interim Assessment Panel - July 2015. Article: World Health Organization Reform: Lessons Learned from the Ebola Epidemic. Systematic review: Global Health Security Demands a Strong International Health Regulations Treaty and Leadership From a Highly Resourced World Health Organization.

Blog: how government action was key to getting Ebola under control in Liberia. In a mid-November meeting of the incident management system team, which was responsible for managing Liberia’s Ebola response, the country’s assistant minister of health looked concerned. 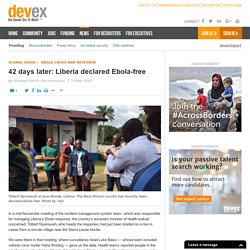 Tolbert Nyenswah, who heads the response, had just been briefed on a rise in cases from a remote village near the Sierra Leone border. We were there in that meeting, where surveillance head Luke Bawo — whose team included veteran virus hunter Hans Rosling — gave us the data. Health teams reported people in the small community of Jene Wonde did not believe Ebola was real. Recent progress was under threat, and we feared a wider outbreak. We had to get on top of flare-ups fast. Fast-forward seven months. But the bits the media often miss are things like that November meeting. 1. The role President Ellen Johnson Sirleaf played, taking some of the hardest decisions, was crucial. Sirleaf decided to continue with cremation until a new cemetery could be opened. 2. 3.