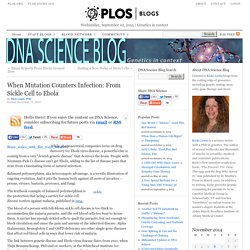 If you enjoy the content on DNA Science, consider subscribing for future posts via email or RSS feed. While pharmaceutical companies focus on drug discovery for Ebola virus disease, a powerful clue is coming from a rare “Jewish genetic disease” that destroys the brain. People with Niemann-Pick C1 disease can’t get Ebola, adding to the list of disease pairs that arise from a fascinating form of natural selection. Balanced polymorphism, aka heterozygote advantage, is a terrific illustration of ongoing evolution. And it pits the human body against all sorts of invaders – prions, viruses, bacteria, protozoa, and fungi. What Happens To Your Body When You Get Ebola? These are the same cells that the AIDS virus (HIV-1) attacks, but Ebola virus kills them far more aggressively. 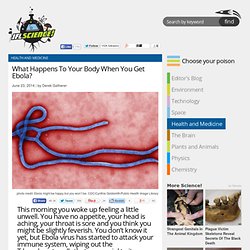 Exactly when and where you caught Ebola virus is unclear, it can take anything between two and 21 days from initial infection to the first symptoms. What is more certain is that you are now infectious yourself. Your family, friends and anyone in close contact with you are all in mortal danger. The next week or so will determine if you are one of the lucky minority who survive.

Learning English - 6 Minute English - The Ebola outbreak. Scientists Believe They Have Identified The Source Of The Ebola Epidemic. The current Ebola epidemic has led to more than 20,000 infections and almost 8,000 deaths in just one year, but how did it all start? 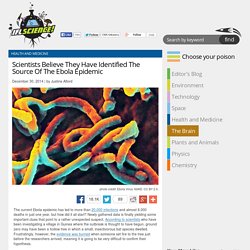 Newly gathered data is finally yielding some important clues that point to a rather unexpected suspect. According to scientists who have been investigating a village in Guinea where the outbreak is thought to have begun, ground zero may have been a hollow tree in which a small, insectivorous bat species dwelled. Frustratingly, however, the evidence was burned when someone set fire to the tree just before the researchers arrived, meaning it is going to be very difficult to confirm their hypothesis.

Ebola is a zoonotic disease, meaning that it can be transmitted between animals and humans. It’s introduced into the human population through contact with bodily fluids of infected animals. When Mutation Counters Infection: From Sickle Cell to Ebola - DNA Science Blog. Chimps And Gorillas Desperately Need Ebola Vaccine Too – Virus Has Wiped Out A Third Of Them. There is a side to the Ebola crisis that, perhaps understandably, has received little media attention: the threat it poses to our nearest cousins, the great apes of Africa. 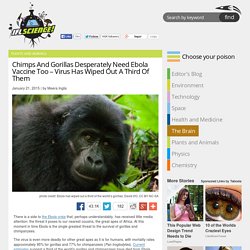 At this moment in time Ebola is the single greatest threat to the survival of gorillas and chimpanzees. The virus is even more deadly for other great apes as it is for humans, with mortality rates approximately 95% for gorillas and 77% for chimpanzees (Pan troglodytes). Current estimates suggest a third of the world’s gorillas and chimpanzees have died from Ebola since the 1990s. As with humans, these deaths tend to come in epidemics. In 1995, an outbreak is reported to have killed more than 90% of the gorillas in Minkébé Park in northern Gabon. There are of course additional factors behind the declining numbers of Africa’s great apes: illegal trading in wildlife and bushmeat, war, deforestation and other infectious diseases.

The ranges of the remaining wild ape populations in Africa. Fast-Spreading Killers: How Ebola Compares with Other Diseases. The West African outbreak of Ebola has claimed more than 4,800 lives and this number is sure to rise. 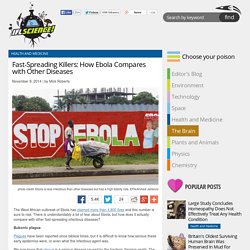 There is understandably a lot of fear about Ebola, but how does it actually compare with other fast-spreading infectious diseases? Bubonic plague Plagues have been reported since biblical times, but it is difficult to know how serious these early epidemics were, or even what the infectious agent was. We now know that plague is a serious disease caused by the bacteria Yersinia pestis. The Black Death is thought to have been bubonic plague, named after the presence of infected lymph nodes; it killed one-third of the population of Europe in the 14th century. Plague is spread by fleas that usually infest rodents. Influenza The 1914-18 war resulted in between 15 and 18 million deaths, but the 1918 flu pandemic killed more than twice that number. Influenza spreads rapidly by coughs and sneezes which release small droplets. Ebola Outbreak Reaches Epidemic Proportions in West Africa. The current Ebola crisis in West Africa has already topped charts for all Ebola outbreaks in history. 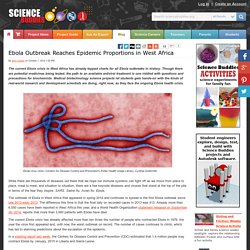 Though there are potential medicines being tested, the path to an available antiviral treatment is one riddled with questions and precautions for biochemists. Medical biotechnology science projects let students gets hands-on with the kinds of real-world research and development scientists are doing, right now, as they face the ongoing Ebola health crisis. Ebola virus virion, Centers for Disease Control and Prevention's Public Health Image Library, Cynthia Goldsmith While there are thousands of diseases out there that we hope our immune systems can fight off as we move from place to place, meal to meal, and situation to situation, there are a few keynote diseases and viruses that stand at the top of the pile in terms of the fear they inspire.

SARS. Where is the Medicine? That doesn't mean researchers and doctors are not pushing boundaries in the race to find medical treatments. American Ebola Patients Receive New Experimental Treatment. West Africa is currently experiencing the largest Ebola virus disease (EVD) outbreak in history. 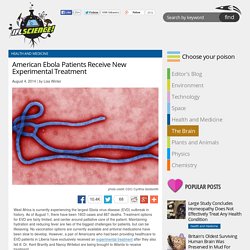 As of August 1, there have been 1603 cases and 887 deaths. Treatment options for EVD are fairly limited, and center around palliative care of the patient. Maintaining hydration and reducing fever are two of the biggest challenges for patients, but can be lifesaving. No vaccination options are currently available and antiviral medications have been slow to develop. However, a pair of Americans who had been providing healthcare to EVD patients in Liberia have exclusively received an experimental treatment after they also fell ill. The FDA will sometimes allow expanded access for unapproved/experimental drugs in the face of life-or-death illnesses.