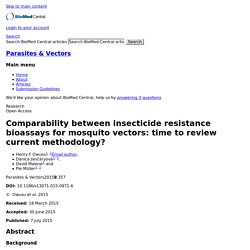 Many factors influence the outcome of insecticide resistance monitoring exercises and the importance of the choice of the assay cannot be overlooked. The results from our study show that although the CDC bottle assay and WHO susceptibility test are mutually used to detect insecticide resistance, the two must not be used interchangeably because the agreement between the two is inconsistent. This could be explained by the fact that the two assays differ in their basic setup. The WHO susceptibility assay, carried out in 125 mm length × 44 mm diameter tubes, measures 24 h mortality by exposing mosquitoes to a known standard concentration for a fixed period of time, usually 1 h.

From our literature search, the WHO susceptibility assay was the more widely used assay. Evidently missing in the CDCs setup is a 24 h holding period. Parasite Epidemiology and Control Volume 1, Issue 3, September 2016, Repellent and insecticidal efficacy of a combination of dinotefuran, pyriproxyfen and permethrin (Vectra® 3D) against Culex pipiens in dogs. Abstract Culex pipiens is an important vector of pathogens of substantial medical and veterinary importance such as Dirofilaria immitis and Dirofilaria repens or the West Nile Virus. The control of these mosquitoes is therefore essential to control the transmission of mosquito-borne agents to humans and animals.

A combination of dinotefuran, permethrin and pyriproxyfen (Vectra® 3D) has already shown its efficacy against Aedes aegypti. The aim of this study was to confirm the efficacy of this combination in repelling and killing another species of mosquito, Culex pipiens, after a single topical application to dogs. Twelve adult Beagle dogs with an equal receptivity to mosquitoes were included in the study and divided in two groups of six dogs: an untreated control group and a group treated with a combination containing 54 mg/mL dinotefuran + 4.84 mg/mL pyriproxyfen + 397 mg/mL permethrin (Vectra® 3D). 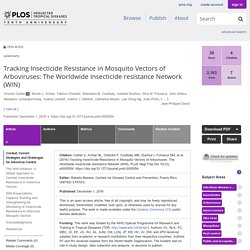 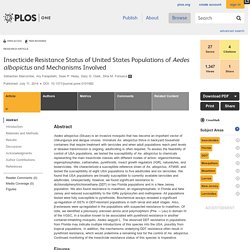 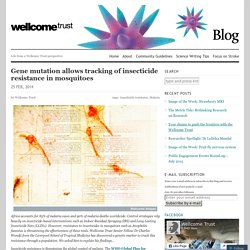 Control strategies rely heavily on insecticide-based interventions such as Indoor Residual Spraying (IRS) and Long Lasting Insecticide Nets (LLINs). However, resistance to insecticides in mosquitoes such as Anopheles funestus is threatening the effectiveness of these tools. Wellcome Trust Senior Fellow Dr Charles Wondji from the Liverpool School of Tropical Medicine has discovered a genetic marker to track this resistance through a population.

We asked him to explain his findings… BIOMED 26/02/14 Why mosquitoes resist – a new molecular marker sheds light on insecticide resistance. This guest blog is written by Vera Unwin. 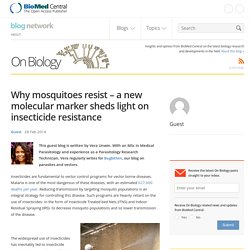 With an MSc in Medical Parasitology and experience as a Parasitology Research Technician, Vera regularly writes for Bugbitten, our blog on parasites and vectors. Insecticides are fundamental to vector control programs for vector borne diseases. Malaria is one of the most dangerous of these diseases, with an estimated 627,000 deaths per year. Reducing transmission by targeting mosquito populations is an integral strategy for controlling this disease. INTECH - FEV 2012 - Insecticides - Pest Engineering. Au sommaire notamment:Behavioral Responses of Mosquitoes to Insecticides. Edited by Farzana Perveen, ISBN 978-953-307-895-3, 538 pages, Publisher: InTech, Chapters published February 15, 2012 under CC BY 3.0 licenseDOI: 10.5772/1354 This book is compiled of 24 Chapters divided into 4 Sections.

Section A focuses on toxicity of organic and inorganic insecticides, organophosphorus insecticides, toxicity of fenitrothion and permethrin, and dichlorodiphenyltrichloroethane (DDT). SCIENCE DAILY 23/09/10 New Technique Uncovers Hidden Insecticide Resistance in Mosquitoes. A new technique pioneered at Liverpool School of Tropical Medicine (LSTM) is improving the detection and monitoring of insecticide resistance in field populations of an important malaria-carrying mosquito. Researchers at LSTM, led by Dr Charles Wondji have developed a new technique which encourages the female Anopheles funestus mosquitoes to lay eggs which are then reared into adult mosquitoes to provide sufficient numbers to determine levels of insecticide resistance and to characterise the underlying mechanisms.

Explaining the significance, John Morgan, who designed the technique, said: "Malaria is the main cause of death in Uganda with some 12 million cases recorded annually. PLOS 21/02/12 Insecticide Resistance in the Dengue Vector Aedes aegypti from Martinique: Distribution, Mechanisms and Relations. Dengue is an important mosquito borne viral disease in Martinique Island (French West Indies). 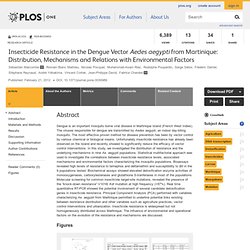 The viruses responsible for dengue are transmitted by Aedes aegypti, an indoor day-biting mosquito. The most effective proven method for disease prevention has been by vector control by various chemical or biological means. Unfortunately insecticide resistance has already been observed on the Island and recently showed to significantly reduce the efficacy of vector control interventions. In this study, we investigated the distribution of resistance and the underlying mechanisms in nine Ae. aegypti populations. Statistical multifactorial approach was used to investigate the correlations between insecticide resistance levels, associated mechanisms and environmental factors characterizing the mosquito populations. Figures Editor: Immo A. PLOS - AOUT 2010 - Insecticide Control of Vector-Borne Diseases: When Is Insecticide Resistance a Problem? Many of the most dangerous human diseases are transmitted by insect vectors. 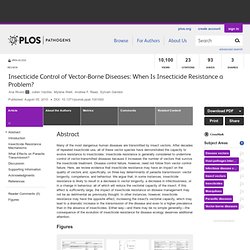 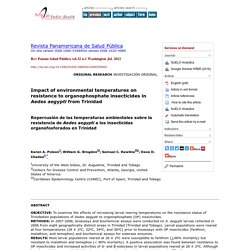