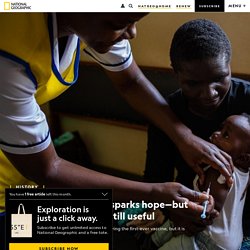 Wrapped in colorful blankets and kitenge pattern cloths, one by one the babies are injected with a shot. And one by one, they cry. Pole baby—sorry, baby—says the nurse. But the prick is worth the pain: These babies are among the earliest to receive the first-ever vaccine against malaria, one of the deadliest diseases in the world. Untitled. 20 April 2020 Poverty is not down to chance or bad choices. 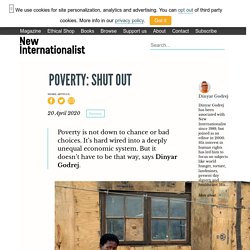 It’s hard wired into a deeply unequal economic system. But it doesn’t have to be that way, says Dinyar Godrej. Growing up in India I heard my parents speak of the ‘deserving poor’. G6 Factfulness - GEOGRAPHY FOR 2019 & BEYOND. The 'Dream Team'​ Who is the Sword Swallowing Swedish Professor? ​ 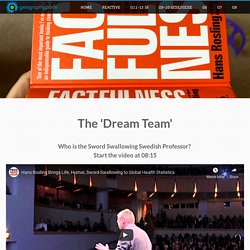 Start the video at 08:15 The seemingly crazy guy you have just seen at the end of the video above is called Professor Hans Rosling. Using your excellent research skills, I would like you to find out a bit more about him and complete the worksheet below. Groupe public Scottish Geography Teachers. Can baby boxes save lives in Kenya's slums?

Nicola Sturgeon: Why governments should prioritize well-being. GM lab mosquitoes may aid malaria fight. Malaria rapid diagnostic tests. Oxfam buckets. Malaria vaccine rolled out for tens of thousands of children. Image copyright D Poland/PATH A large-scale pilot of what has been called the world's first malaria vaccine to give partial protection to children has begun in Malawi. 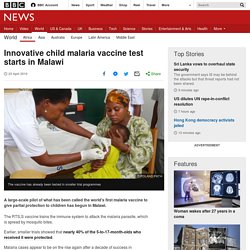 The RTS,S vaccine trains the immune system to attack the malaria parasite, which is spread by mosquito bites. Earlier, smaller trials showed that nearly 40% of the 5-to-17-month-olds who received it were protected. Malaria cases appear to be on the rise again after a decade of success in combating the deadly disease. "This is a landmark moment for immunisations, malaria control, and public health," Dr Kate O'Brien, Director of Immunisation and Vaccines at the World Health Organization, told the BBC. According to the most recent annual figures, global malaria cases are no longer falling, sparking concerns about its resurgence. Metrocosm - Data Visualization, Maps, and Statistical Analysis. How women's empowerment and climate action go hand in hand - The Social Change Agency. Can Exxon Mobil Protect Mozambique From Climate Change? In India, Old Buses Find New Life As Women's Bathrooms. How can famines be ended?

1 April 2018 Mass starvation is making a comeback as a weapon of war. 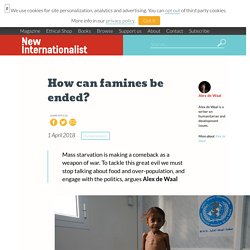 To tackle this great evil we must stop talking about food and over-population, and engage with the politics, argues Alex de Waal. Higher Geography Global Issues D&H CHOLERA. The 'superwoman' midwife of the mountains. Plague Inc. Scientists hail malaria breakthrough as bed nets prove deadly to mosquitoes. A bed net designed to kill insecticide-resistant mosquitoes could prevent millions of cases of malaria across sub-Saharan Africa, scientists have found. 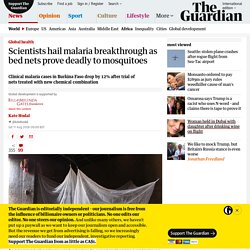 A two-year clinical trial in Burkina Faso showed that dousing bed nets with a combination of chemicals resulted in a 12% reduction in clinical malaria cases, compared with conventional bed nets. “This is simply a good news story and one to give us hope for the future,” said Lindsay. “The 12% reduction may look small, but it’s actually huge: if we had rolled the nets out across the whole of Burkina Faso, then we would have reduced the number of malaria attacks in children under five by 700,000, or by 1.2m for the whole population.” Existing bed nets contain a single pyrethroid insecticide, to which blood-seeking malaria mosquitoes (the female Anopheles) are increasingly resistant.

Bill Gates: The next outbreak? We’re not ready. The crop that put women on top in Zanzibar. Nandos.co. Ghana's unlikely marriage of mining and malaria control draws envious glances. Nestled in the Ashanti region of southern Ghana, the small town of Obuasi is encircled by hills, largely forested but bearing scars from open-cast and illegal mining. 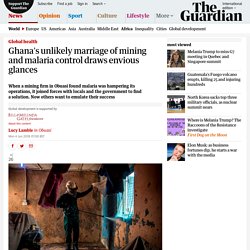 Eighty kilometres south of the country’s second city, Kumasi, it is a community of subsistence farmers and miners. Eight ways to close the development gap – Geography Cat. INVESTMENT by other nations, NGOs and TNCs Google, Walmart, the World Bank and over 2000 Chinese companies have invested in Africa, in large schemes such as an HEP station in Madagascar and a railway in Sudan TNCs opening production plants in LICs and NEES, see article about Unilever and Shell in Nigeria brings jobs and infrastructure, see article on tourism in Jamaica Help from other nations and NGOs either in the short term as a response to a crisis or, in the long term to help accelerate the country’s development, read more here also known as intermediate technology, aids development in a sustainable way, see article here the organisation promotes fair wages to farmers in LICs by guaranteeing a fair price for produce and investing in the local community, read more here debt repayments have been cancelled for some countries so that their governments have more money to invest in strategies that will improve people’s quality of life, read more… 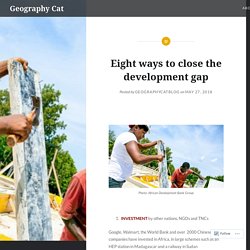