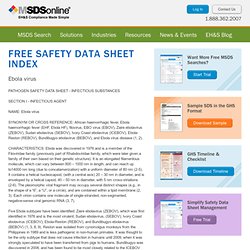 CHARACTERISTICS: Ebola was discovered in 1976 and is a member of the Filoviridae family (previously part of Rhabdoviridae family, which were later given a family of their own based on their genetic structure). It is an elongated filamentous molecule, which can vary between 800 – 1000 nm in length, and can reach up to14000 nm long (due to concatamerization) with a uniform diameter of 80 nm (2-5). It contains a helical nucleocapsid, (with a central axis) 20 – 30 nm in diameter, and is enveloped by a helical capsid, 40 – 50 nm in diameter, with 5 nm cross-striations (2-6). A single outbreak in Uganda, has a genome with 30% variance from the other strains. 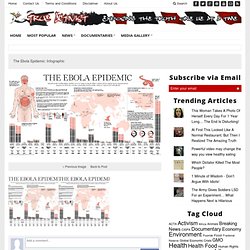 If Ebola Arrives In The U.S., Stopping It May Rely On Controversial Tools. Hospitals unprepared to allocate scarce drugs and supplies if Ebola spreads in the US - Health & wellness. 2014 West Africa Ebola outbreak. An ongoing epidemic of the Ebola virus has spread throughout Guinea and beyond the nation's borders in West Africa. 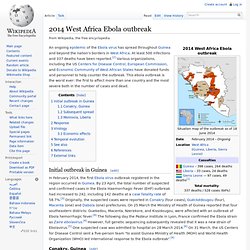 At least 500 infections and 337 deaths have been reported.[2] Various organizations, including the US Centers for Disease Control, European Commission, and Economic Community of West African States have donated funds and personnel to help counter the outbreak. This ebola outbreak is the worst ever: the first to affect more than one country and the most severe both in the number of cases and dead. Initial outbreak in Guinea[edit] Ebola virus disease, West Africa – update 18 July 2014. Epidemiology and surveillance The World Health Organization (WHO) continues to monitor the evolution of the Ebola virus disease (EVD) outbreak in Sierra Leone, Liberia, and Guinea. 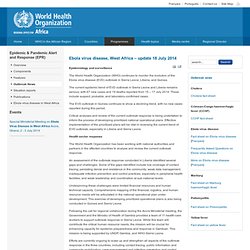 The current epidemic trend of EVD outbreak in Sierra Leone and Liberia remains serious, with 67 new cases and 19 deaths reported from 15 – 17 July 2014. Sierra Leone's 365 Ebola deaths traced back to one healer. It has laid waste to the tribal chiefdoms of Sierra Leone, leaving hundreds dead, but the Ebola crisis began with just one healer's claims to special powers. 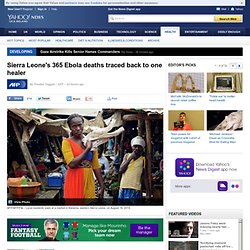 The outbreak need never have spread from Guinea, health officials revealed to AFP, except for a herbalist in the remote eastern border village of Sokoma. "She was claiming to have powers to heal Ebola. Cases from Guinea were crossing into Sierra Leone for treatment," Mohamed Vandi, the top medical official in the hard-hit district of Kenema, told AFP. "She got infected and died. During her funeral, women around the other towns got infected. " Ebola has killed more than 1,220 people since it emerged in southern Guinea at the start of the year, spreading first to Liberia and cutting a gruesome and gory swathe through eastern Sierra Leone since May.

The tropical pathogen can turn people into de facto corpses with little higher brain function and negligible motor control days before they die. - 'Deadly and unforgiving' - Tracing Ebola’s Breakout to an African 2-Year-Old. Photo Patient Zero in the outbreak, researchers suspect, was a 2-year-old boy who died on Dec. 6, just a few days after falling ill in a village in Guéckédou, in southeastern . 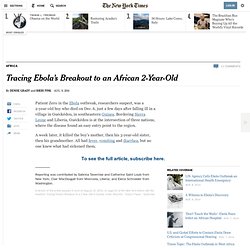 Bordering and Liberia, Guéckédou is at the intersection of three nations, where the disease found an easy entry point to the region. A week later, it killed the boy’s mother, then his 3-year-old sister, then his grandmother. All had , and , but no one knew what had sickened them. Two mourners at the grandmother’s funeral took the virus home to their village. Sierra Leone's chief Ebola doctor contracts the virus. How to Ignore a Plague — Matter. ‘There is no such thing as Ebola’ Government health workers are seen during the administration of blood tests for the Ebola virus in Kenema, Sierra Leone, June 25, 2014. 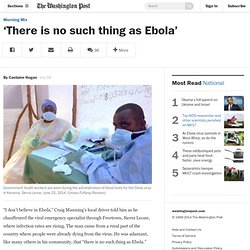 (Umaru Fofana/Reuters) “I don’t believe in Ebola,” Craig Manning’s local driver told him as he chauffeured the viral emergency specialist through Freetown, Sierra Leone, where infection rates are rising. The man came from a rural part of the country where people were already dying from the virus. He was adamant, like many others in his community, that “there is no such thing as Ebola.” He is wrong. Human Trials for Ebola Vaccine? Nov 8, 2012 | Jason Hayes | Research & Policy Recent Ebola outbreaks in the Democratic Republic of Congo and Uganda underscore a persistent challenge about the terrifying little virus: we don’t yet know how to prevent it. 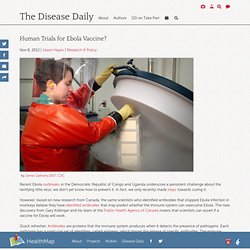 In fact, we only recently made steps towards curing it. However, based on new research from Canada, the same scientists who identified antibodies that stopped Ebola infection in monkeys believe they have identified antibodies that may predict whether the immune system can overcome Ebola. The new discovery from Gary Kobinger and his team at the Public Health Agency of Canada means that scientists can assert if a vaccine for Ebola will work.

Quick refresher: Antibodies are proteins that the immune system produces when it detects the presence of pathogens. Ebola.