Ebola general. Ebola Outbreak. Inside the Ebola Outbreak September 5, 2014, 10:22 am ET · by Patrice Taddonio Filming in Sierra Leone was “like being in a war zone where the enemy is invisible,” said FRONTLINE’s Wael Dabbous, who spent two weeks on the ground as the outbreak spiraled out of control. 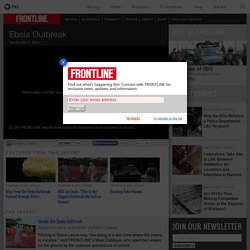 Exclusive Video: Where the Ebola Outbreak Began December 29, 2014, 3:04 pm ET · by Jason M. Breslow When a 1-year-old boy named Emile came down with a mysterious illness in late December 2013, the village of Meliandou, Guinea, reacted with terror and confusion. Ebola vaccine works, offering 100% protection in African trial. A highly unusual clinical trial in Guinea has shown for the first time that an Ebola vaccine protects people from the deadly virus. 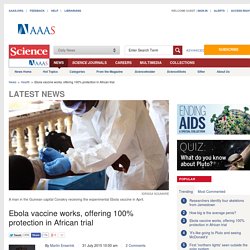 The study, published online today by The Lancet, shows that the injection offered contacts of Ebola cases 100% protection starting 10 days after they received a single shot of the vaccine, which is produced by Merck. Scientists say the vaccine could help to finally bring an end to the epidemic in West Africa, now more than 18 months old. "This will go down in history as one of those hallmark public health efforts," says Michael Osterholm, the director of the Center for Infectious Disease Research and Policy in Twin Cities, Minnesota, who wasn't involved in the study.

"We will teach about this in public health schools. " The vaccine, first developed by researchers at the Public Health Agency of Canada, consists of the Vesicular Stomatitis Virus (VSV), which causes disease in livestock but not people, with the Ebola surface protein stitched into it. Ebola Outbreak. Surviving Ebola. Ebola: Woman saves three relatives from death. Fatu Kekula has cared for four of her family members with Ebola, keeping three alive without infecting herself. 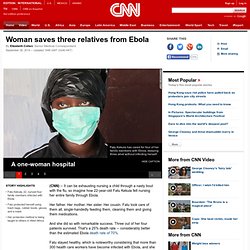 Her trash bag protection method is being taught to others in West Africa who can't get personal protective equipment. Kekula saved, from left, her mother, Victoria, 57, sister, Vivian, 28, and father, Moses, 52. Kekula's 14-year-old cousin who was living with them, Alfred Winnie, passed away. Kekula's father is working to find a scholarship for Fatu so she can finish her final year of nursing school. He has no doubt his daughter will go on to save more lives. A one-woman hospital. Ebola vaccine to be tested on humans. Why Ebola is so dangerous. Ebola survivor: 'I was terribly afraid' The Ebola outbreak in West Africa is likely to last until the end of the year according to medical charities Medecins Sans Frontieres and the International Federation of Red Cross and Crescent societies. 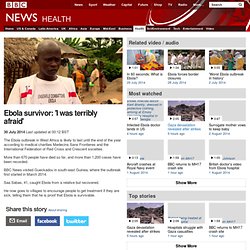 More than 670 people have died so far, and more than 1,200 cases have been recorded. Ebola crisis: Infected doctor Kent Brantly lands in US. 2 August 2014Last updated at 14:06 ET Aerial footage shows Dr Kent Brantly arriving at the hospital A US doctor infected with the deadly Ebola virus in Liberia has arrived in the US for treatment at a specialised unit in Atlanta, Georgia. 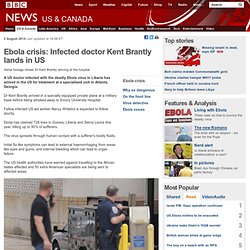 Dr Kent Brantly arrived in a specially equipped private plane at a military base before being whisked away to Emory University Hospital. Fellow infected US aid worker Nancy Writebol is expected to follow shortly. Ebola has claimed 728 lives in Guinea, Liberia and Sierra Leone this year, killing up to 90% of sufferers. The virus spreads through human contact with a sufferer's bodily fluids. Initial flu-like symptoms can lead to external haemorrhaging from areas like eyes and gums, and internal bleeding which can lead to organ failure. The US health authorities have warned against travelling to the African states affected and 50 extra American specialists are being sent to affected areas. Gloved hands "This is a good hospital," he said.

Ebola outbreak: The U.S. is ready, experts say. The ABCS is a tentlike device that can be installed in a modified Gulfstream III aircraft. 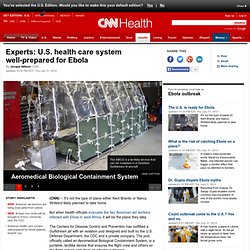 The containment system allows health care officials to move contagious people without endangering passengers or the flight crew. The CDC has outfitted this jet with the containment system. It is stored in Georgia near the health agency's Atlanta headquarters. According to a CDC information document, it takes about six hours to install the system in a Gulfstream III. Aeromedical Biological Containment System NEW: American aid workers are being evacuated from LiberiaNEW: At least one victim will be brought to Emory University near the CDCAmerican health care system well-prepared for Ebola patients, experts say (CNN) -- It's not the type of plane either Kent Brantly or Nancy Writebol likely planned to take home. 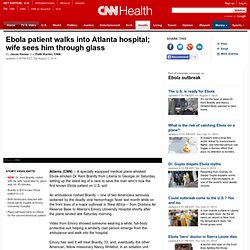 NEW: Dr. Kent Brantly visited with his wife, separated by glass wall, for 45 minutesBrantly is first known Ebola patient in U.S.Both Americans infected with Ebola will be treated at Emory University Hospital Plane will head back to Liberia for the second American patient Atlanta (CNN) -- A specially equipped medical plane whisked Ebola-stricken Dr. Kent Brantly from Liberia to Georgia on Saturday, setting up the latest leg of a race to save the man who's now the first known Ebola patient on U.S. soil. An ambulance rushed Brantly -- one of two Americans seriously sickened by the deadly viral hemorrhagic fever last month while on the front lines of a major outbreak in West Africa -- from Dobbins Air Reserve Base to Atlanta's Emory University Hospital shortly after the plane landed late Saturday morning.