In Relation to Vitamins & Antioxidants 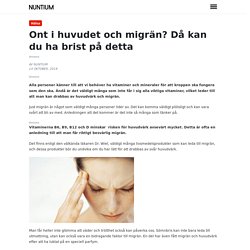 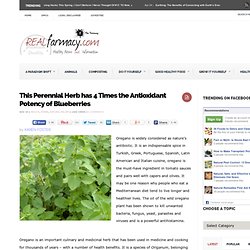 It is an indispensable spice in Turkish, Greek, Portuguese, Spanish, Latin American and Italian cuisine, oregano is the must-have ingredient in tomato sauces and pairs well with capers and olives. It may be one reason why people who eat a Mediterranean diet tend to live longer and healthier lives. The oil of the wild oregano plant has been shown to kill unwanted bacteria, fungus, yeast, parasites and viruses and is a powerful antihistamine.

Omega 3. Epsom Salt. Antioxidants, Flavonoids and other Phytochemicals. Vitamin D. Natural Homemade Magnesium “Chill Pill” Gummies Great For Insomnia, Anxiety, And Stress. Sprawdź czy nie cierpisz na niedobór witaminy B12 – objawy, przyczyny, leczenie. Osteoporosis Is Scurvy Of The Bone, Not Calcium Deficiency. The Facts:All restrictions on restaurants and other business in Florida have been lifted, and so have local fines against people who refuse to wear masks after the CDC released new survival rates.Reflect On:Why are opinions and narratives that oppose the WHO being censored, ridiculed, and largely ignored? 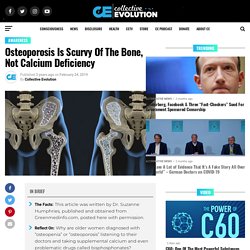 Why aren't they discussed openly and transparently? What Happened: Florida Governor Ron DeSantis recently lifted all restrictions on restaurants and other business in Florida and banned local fines against people who refuse to wear masks. He did so after showing new statistics just released by the Centers for Disease Control (CDC) showing very high survival rates, as you can see from the picture picture above. The CDC has a page on their website titled “Covid-19 Pandemic Planning Scenarios.” According to them, “Each scenario is based on a set of numerical values for biological and epidemiological characteristics of COVID-19 illness, which is caused by the SARS-CoV-2 virus. These Homemade Magnesium “Chill Pill” Gummies Are Great for Insomnia, Anxiety, and Stress.

Vitamin B12 Inhibits Key Enzyme in Parkinson’s Disease. Parkinson's is the most common, chronic neurodegenerative movement disorder affecting 1% of the global population over seventy years of age. 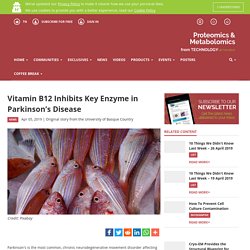 Right now, there is no cure for this disease and the available treatments focus on addressing its symptoms but not its progression. Although most cases of Parkinson's are sporadic, the inheritable variants of the disease are mainly associated with mutations of the gene that encodes the LRRK2 enzyme. In 2004 an international research team, in which researchers from the Basque Country participated, established the link between one of the mutations in this enzyme and patients diagnosed with the disease.

So the LRRK2 enzyme, which is also known internationally by the name "dardarina", the Basque word that means tremor, has become one of the most attractive therapeutic targets for developing new drugs to combat inheritable Parkinson's. This article has been republished from materials provided by the University of Basque. Vitamin D Deficiency Linked to Loss in Brain Plasticity. Perineuronal nets (bright green) surround particular neurons (blue). 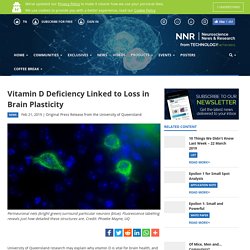 Fluorescence labelling reveals just how detailed these structures are. Credit: Phoebe Mayne, UQ. Why 80% of Us Are Deficient In Magnesium. What Are Free Radicals? The body is under constant attack from oxidative stress. 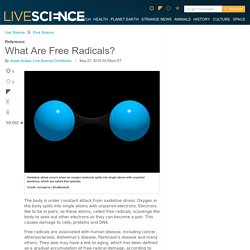 Oxygen in the body splits into single atoms with unpaired electrons. Electrons like to be in pairs, so these atoms, called free radicals, scavenge the body to seek out other electrons so they can become a pair. This causes damage to cells, proteins and DNA. Free radicals are associated with human disease, including cancer, atherosclerosis, Alzheimer's disease, Parkinson's disease and many others. They also may have a link to aging, which has been defined as a gradual accumulation of free-radical damage, according to Christopher Wanjek, the Bad Medicine columnist for Live Science. Substances that generate free radicals can be found in the food we eat, the medicines we take, the air we breathe and the water we drink, according to the Huntington's Outreach Project for Education at Stanford University. Free radicals are the natural byproducts of chemical processes, such as metabolism.

Soursop Fruit 100 Times Stronger At Killing Cancer Than Chemotherapy. The Soursop is a flowering, evergreen tree native to tropical regions of the world. 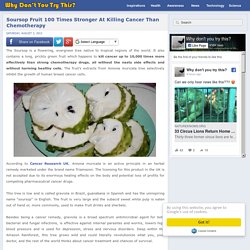 It also contains a long, prickly green fruit which happens to kill cancer up to 10,000 times more effectively than strong chemotherapy drugs, all without the nasty side effects and without harming healthy cells. The fruit's extracts from Annona muricata tree selectively inhibit the growth of human breast cancer cells. According to Cancer Research UK, Annona muricata is an active principle in an herbal remedy marketed under the brand name Triamazon.

The licensing for this product in the UK is not accepted due to its enormous healing effects on the body and potential loss of profits for competing pharmaceutical cancer drugs. This tree is low and is called graviola in Brazil, guanabana in Spanish and has the uninspiring name “soursop” in English. Research shows that with extracts from this miraculous tree it now may be possible to: Panic Attacks and Anxiety Linked to Low Vitamin B and Iron Levels. If you suffer from anxiety or develop occasional panic attacks marked by bouts of hyperventilation, you could merely be experiencing the side effects of an underlying nutrient deficiency that is easily correctable. This definitely appears to have been the case with 21 people who participated in a recent study based out of Japan, which identified a lack of both vitamin B6 and iron among participants who experienced panic or hyperventilation attacks.

The relatively small study evaluated nutrient levels among a group of participants with varying degrees of anxiety and frequencies of panic and hyperventilation attacks, some of which resulted in emergency room visits. A control group was also evaluated, and its participants’ nutrient levels compared to those of the primary group. “These results suggest that low serum concentrations of vitamin B6 and iron are involved in PA (panic attacks) and HVA (hyperventilation),” wrote the authors in their study conclusion. Sources: Share: 8 Signs That Your Body Is Begging For More Magnesium. Kate is a writer who laughs at her own jokes and likes to pour too much hot sauce on her food. 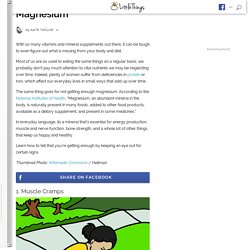 With so many vitamins and mineral supplements out there, it can be tough to even figure out what is missing from your body and diet. Most of us are so used to eating the same things on a regular basis, we probably don’t pay much attention to vital nutrients we may be neglecting over time. Indeed, plenty of women suffer from deficiencies in protein or iron, which affect our everyday lives in small ways that add up over time. The same thing goes for not getting enough magnesium. According to the National Institutes of Health, “Magnesium, an abundant mineral in the body, is naturally present in many foods, added to other food products, available as a dietary supplement, and present in some medicines.”

Magnesium - One of the Most Important Nutrients for Heart Health. By Dr. 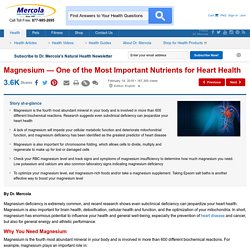 Mercola Magnesium deficiency is extremely common, and recent research shows even subclinical deficiency can jeopardize your heart health. Magnesium is also important for brain health, detoxification, cellular health and function, and the optimization of your mitochondria. In short, magnesium has enormous potential to influence your health and general well-being, especially the prevention of heart disease and cancer, but also for general energy and athletic performance. How to Stop Losing and Start Getting More Magnesium - The Real Positive Experience. There is a nutrient which is actually a weapon against almost most illnesses and diseases. 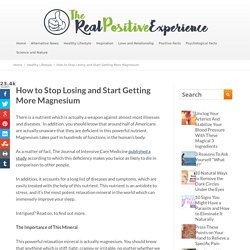 In addition, you should know that around half of Americans are actually unaware that they are deficient in this powerful nutrient. Magnesium takes part in hundreds of functions in the human’s body. The Big Vitamin D Mistake. 8 Signs That Your Body Is Begging For More Magnesium. Why Most People Are Deficient In Magnesium: The Signs and What You Can Do. By ORGANIC OLIVIA Signs of magnesium deficiency are everywhere in the United States, if you know what to look for.

Unfortunately, the symptoms are so incredibly common that they constantly slip under the radar! Puberty Before Age 10: A New ‘Normal’? Reaching puberty is a rite of passage that we’ve all been through, but children nowadays are reaching it earlier than ever before — a trend that has both health experts and parents alarmed.

Precocious puberty, which is the appearance of secondary sex characteristics like pubic hair or breast growth before age 8, or the onset of menarche before age 9, impacts at least 1 in 5,000 U.S. children, and the rate is on the rise.1 Even in the last three decades, children (particularly girls) are maturing at younger and younger ages (precocious puberty is 10 times more common in girls than in boys). In the 19th century the onset of menstruation occurred around the age of 15. Now the average age of the first period, or menarche, is around 12.

Science Daily have reported that: Magnesium to make depression drugs obsolete? New science finds magnesium safer, more affordable and more effective than SSRIs – NaturalNews.com. Råd&Rön - De svenska superbären. Acai, goji och inkabär sägs innehålla en formidabel mängd nyttigheter. Taking B12 Energy Vitamins May Cause Lung Cancer - The Atlantic. Forskare ryter till om D-vitamin. What Does Your Food Craving Mean? THIS is What You Should Eat Instead! We all get those moments of “weakness” when we succumb to our food craving and ruin our diet plan or healthy eating streak. 9 Ways to Boost Glutathione. Healthy News and Information. This Antioxidant Is More Important Than All Others. Tänderna visar om din hälsa är god. Redan så långt tillbaka som 1939 beskrev den kanadensiska tandläkaren Weston A.