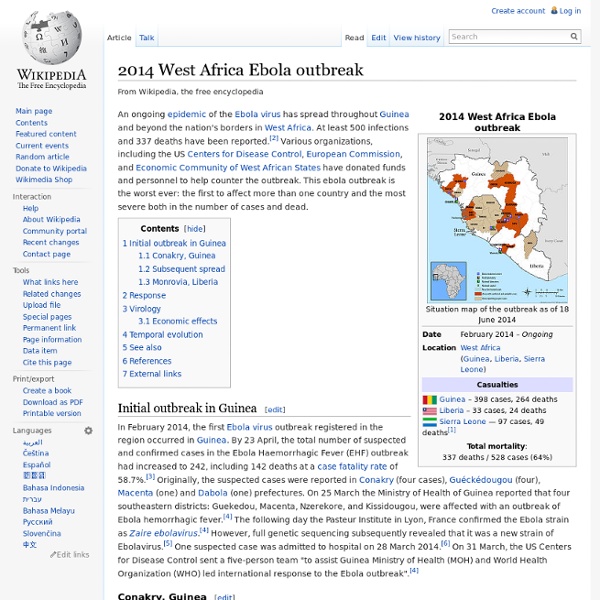 An ongoing epidemic of the Ebola virus has spread throughout Guinea and beyond the nation's borders in West Africa. At least 500 infections and 337 deaths have been reported.[2] Various organizations, including the US Centers for Disease Control, European Commission, and Economic Community of West African States have donated funds and personnel to help counter the outbreak. This ebola outbreak is the worst ever: the first to affect more than one country and the most severe both in the number of cases and dead. Initial outbreak in Guinea[edit] In February 2014, the first Ebola virus outbreak registered in the region occurred in Guinea. By 23 April, the total number of suspected and confirmed cases in the Ebola Haemorrhagic Fever (EHF) outbreak had increased to 242, including 142 deaths at a case fatality rate of 58.7%.[3] Originally, the suspected cases were reported in Conakry (four cases), Guéckédougou (four), Macenta (one) and Dabola (one) prefectures. Conakry, Guinea[edit]

Myst IV: Revelation The plot of Revelation ties up loose ends from the original Myst. The player is summoned by Atrus, a man who creates links to other worlds known as Ages by writing special linking books. Almost twenty years earlier, Atrus' two sons nearly destroyed all of his linking books and were imprisoned; Atrus now wishes to see if his sons' imprisonment has reformed them. The player ends up traveling to each brother's prison, in an effort to recover Atrus' daughter Yeesha from the brothers' plot. Gameplay[edit] The mouse cursor helps to provide visual cues for player actions and movement. Revelation features several gameplay enhancements that aid puzzle solving and plot progression. Plot[edit] The Stranger sets out to find Yeesha. Development[edit] Screenshot of the Serenia Age; each world in Revelation has its own distinct visual style.[7] The visuals of the game were positively received upon release. Audio[edit] Reception[edit] References[edit]