Product Validation - 5 Strategies To Validate Your Product Ideas. Coming up with a product idea for your new online business can be difficult. 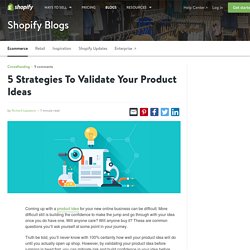 More difficult still is building the confidence to make the jump and go through with your idea once you do have one. Will anyone care? Will anyone buy it? These are common questions you’ll ask yourself at some point in your journey. Truth be told, you’ll never know with 100% certainty how well your product idea will do until you actually open up shop. In this post, we will look at a five strategies you can use right now to validate your product ideas. Let's find out how. 1.

You’re in all likelihood not the first person selling your particular product online. Although you’ll probably never know exactly how well your competition is doing, there are things you can uncover that can give some indication. Uncovering Your Competitors The first step is to first determine who is currently selling your potential product. As an example, I searched for "Hair Extensions" in Google. Competitor Analysis from SEMRush 1. 2.

Twitter: A lesson from Instapaper: The freemium model is doomed – VentureBeat. News of Pinterest’s acquisition of Instapaper received a bittersweet reaction from users of the latter. 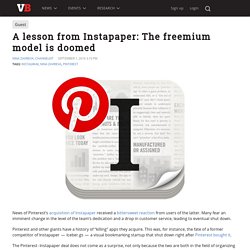 Many fear an imminent change in the level of the team’s dedication and a drop in customer service, leading to eventual shut down. Pinterest and other giants have a history of “killing” apps they acquire. This was, for instance, the fate of a former competitor of Instapaper — Iceber.gs — a visual bookmarking startup that shut down right after Pinterest bought it. The Pinterest - Instapaper deal does not come as a surprise, not only because the two are both in the field of organizing content, but also because of Instapaper’s freemium business model.

Given the generosity of the free product offering, users had little incentive to pay for it. Instapaper’s fate would have been different had the product been a strictly paid one. MOSourceLink. From Google Ventures: How To Hire The Best Designer For Your Team. Finding the perfect designer to join your team is tough—there’s no way around it. 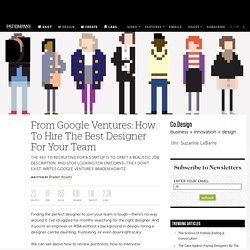 I’ve struggled for months searching for the right designer. And if you’re an engineer or MBA without a background in design, hiring a designer can be daunting, frustrating, or even downright scary. We can talk about how to review portfolios, how to interview candidates, and how to persuade a designer that your team is worth joining. But before all that, there’s a fundamental question you need to answer: What kind of designer are you looking for? The field of UX design is still young. That’s why I don’t find the term "designer" to be useful in describing the skills a candidate should have. What skills do you need? The first step to hiring a designer is to list out all the skills necessary to build your product. . • Research: What do customers want? • Product design: What are we building? • Copywriting: How do we describe our product to customers in a way they understand? Hunting the unicorn Tough choices. Peter Diamandis Grit… So Important! By Peter Diamandis: An overnight success… after 10 years of hard work… That’s the story for my founding XPRIZE and co-founding Zero-G. 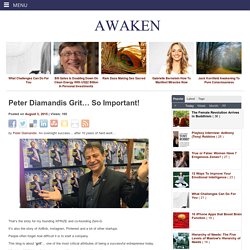 It’s also the story of AirBnb, Instagram, Pinterest and a lot of other startups. People often forget how difficult it is to start a company. This blog is about “grit“… one of the most critical attributes of being a successful entrepreneur today. What is grit? Entrepreneurial success is almost always harder than you think and almost always takes longer than you expect. But that’s also why its fun – it is a challenge that you have to throw your whole life into, and when you get it right, the rewards are well worth the effort. Entrepreneurship is non-linear – Grit is your key friend Let’s take a look at three infographics depicting the non-linear, sometimes crazy paths to success of a few well known, billion dollar startups: AirBnb, Instagram and Pinterest.

First, here’s AirBnb: A few of my favorite highlights: Thanks goodness they stuck with it. Source: Diamandis. Raise Your Odds of Success — Lean Stack. Facebook. OPO Startups. The BALSA Foundation.