Vietnam’s mobile game market is strong, but can it go beyond games? On my iPhone, my screen is full of apps. 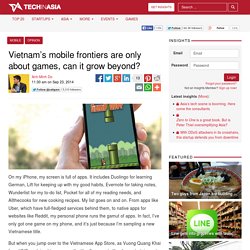 It includes Duolingo for learning German, Lift for keeping up with my good habits, Evernote for taking notes, Wunderlist for my to-do list, Pocket for all of my reading needs, and Allthecooks for new cooking recipes. My list goes on and on. From apps like Uber, which have full-fledged services behind them, to native apps for websites like Reddit, my personal phone runs the gamut of apps. In fact, I’ve only got one game on my phone, and it’s just because I’m sampling a new Vietnamese title.

But when you jump over to the Vietnamese App Store, as Vuong Quang Khai from VNG explained to me recently, it’s all games (with a few entertainment apps splattered in between). Last week, we reported that Vietnam’s smartphone market is edging towards 33 million users in 2014. The problem arises when you have a massive community of mobile developers that are almost totally focused on games. Psychological Strategies Every Leader Should Use. TOP CROWDFUNDING ARTICLES.

Startup or not Startup

In Vietnam. Freemium monetization. I told you so. The weekly Boidinarian. Tech Leaders Tell Interns What They Wish They Knew At Age 20. Hundreds of Bay Area interns lined up on Tuesday to hear some of the biggest names in Silicon Valley share what they wished they knew when they were 20 at a recruiting event called Internapalooza. 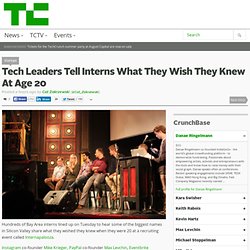 Instagram co-founder Mike Krieger, PayPal co-founder Max Levchin, Eventbrite co-founder Kevin Hartz, early PayPal and Airbnb investor Keith Rabois, Indiegogo co-founder Danae Ringelmann, Yelp VP of Engineering Michael Stoppelman and Re/code founder Kara Swisher were among the 11 speakers whose advice ranged from whether or not you should drop out of school to launch a startup to how to network. The event was organized by Cory Levy, who at 19 co-founded One, a mobile app that connects you to others with similar interests. Pratiques d'entrepreneur. Peter thiel course. La France veut accélérer l’essor du « crowdfunding »

A Dozen Things I’ve Learned From Marc Andreessen. Marc Andreessen is able to explain himself so well that I should have less commentary to add to the quotations in this post than usual. 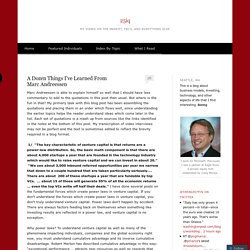 But where is the fun in that? My primary task with this blog post has been assembling the quotations and placing them in an order which flows well, since understanding the earlier topics helps the reader understand ideas which come later in the list. Each set of quotations is a mash up from sources like the links identified in the notes at the bottom of this post. My transcription of video interviews may not be perfect and the text is sometimes edited to reflect the brevity required in a blog format. 1/ “The key characteristic of venture capital is that returns are a power-law distribution.

Why power laws? 2/ “We think you can draw a 2×2 matrix for venture capital. “The entire art of venture capital in our view is the big breakthrough for ideas. Essays. 10 Actions Vietnamese People Need To Take To Save Their Startup Scene Today. The Vietnamese startup community is in a crisis. 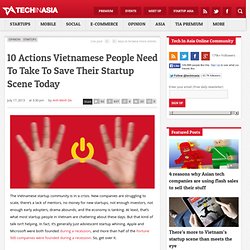 New companies are struggling to scale, there’s a lack of mentors, no money for new startups, not enough investors, not enough early adopters, drama abounds, and the economy is tanking. At least, that’s what most startup people in Vietnam are chattering about these days. But that kind of talk isn’t helping. In fact, it’s generally just adolescent startup whining. Apple and Microsoft were both founded during a recession, and more than half of the Fortune 500 companies were founded during a recession. A DOZEN THINGS I’VE LEARNED ABOUT BUSINESS. Burn Rates: How Much?

In the comments to last week's Burn Rate post, I was asked to share some burn rates from our portfolio. 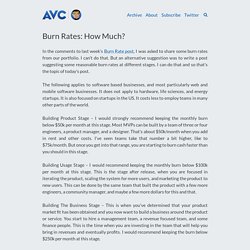 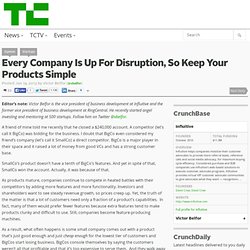 He recently started angel investing and mentoring at 500 startups. Follow him on Twitter @vbelfor. A friend of mine told me recently that he closed a $240,000 account.