These-12-best-funded-stealthy-u-s-startups-call. Many startups like to start out in "stealth mode" in their early days, but it's hard to keep everything about them under wraps when they raise funds. 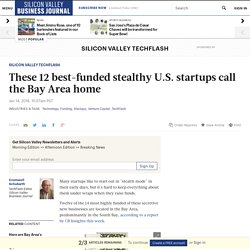 Los Altos is home to the most companies on the list with three, followed by San Francisco, Menlo Park and San Jose with two apiece. Collectively, these startups have raised $250 million. Not all of them have disclosed their investors, but among those that have, Lightspeed Venture Partners and Khosla Ventures are the only venture firms who show up more than once. Most of the companies on the list took their first disclosed funding round 14 months or less ago. Here are the Bay Area companies that made the list and what is known about these well-funded mystery businesses: 1. 2. 3. 4. 5. 6. 7. 8. 9. Toyota spends $1B to create Silicon Valley lab. LOS ANGELES -- Upping the ante in the smart-car wars, Toyota has announced it will spend $1 billion to create a new subsidiary in Silicon Valley that will focus entirely on developing artificial intelligence and robotics.

In creating Toyota Research Institute as a separate entity, Toyota becomes the latest automaker to establish a research arm in the heart of California's high-tech corridor. It also represents a new commitment to California by Toyota after uprooting its U.S. headquarters from the Los Angeles suburb of Torrance, where it had been situated for decades, to Plano, Texas. Toyota joins Mercedes-Benz, Ford and a list of other automakers that have been using their Silicon Valley research labs to develop self-driving cars and other promising ways to make cars smarter and safer.

Toyota said its $1-billion investment will suffice for five years. Besides the first lab in Palo Alto, Calif., it will also establish a second in the country's other hot tech gulch, Cambridge, Mass. Double Robotics - Telepresence Robot for Telecommuters. How should you tap into Silicon Valley? The roughly 1,800-square-mile area commonly known as Silicon Valley, southeast of San Francisco Bay, is home to just three million people—slightly less than 1 percent of the US population.

Yet the Valley, seat of several world-class universities and numerous cutting-edge enterprises, has become an economic and innovation powerhouse whose importance is hugely disproportionate to its small physical size. If it were a country, it would rank among the world’s 50 largest economies, larger than those of Hungary, Vietnam, and New Zealand, among others. In 2013, Silicon Valley generated over 12 percent of US patent registrations and produced about 11 percent of new US-company IPOs, and the greater Bay Area attracted almost 40 percent of US venture-capital (VC) investment. More than a few ideas hatched in the Bay Area have paid off handsomely. Thirty-two of the 50 private start-ups with valuations at or exceeding $1 billion are based there. No silver bullet A practical playbook Bigger bets. The 100 leaders of the top tech accelerators. One of the most common features of the tech landscape today is the startup accelerator. 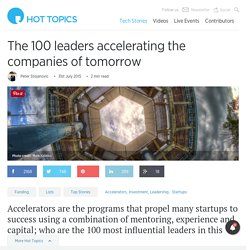 There are over 200 separate programs in the US alone. The model encompasses mentorship, funding, access to a network of other entrepreneurs, and a space for entrepreneurs and their ideas to mature in safe surroundings. That potentially lucrative combination has seduced investors and investees alike and being accepted into an accelerator program can be a springboard for success. Not only are top tech accelerators behind the success of talent such as Reddit, Airbnb and Dropbox but they facilitate introductions to institutional investors upon graduation from the program. However, these successes have acted as the catalyst for an influx of new accelerators, either stand-alone programs or an attempt by a larger corporation to form an innovation lab. This list of 100 leaders, focuses on the driving forces behind the top tech accelerators in the world today. 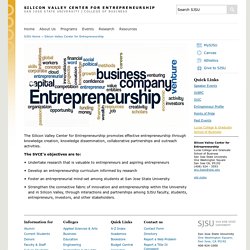 The SVCE's objectives are to: ABOUT US - TiE SV. The Indus Entrepreneurs (TiE), was founded in 1992 in Silicon Valley by a group of successful entrepreneurs, corporate executives, and senior professionals with roots in the Indus region. 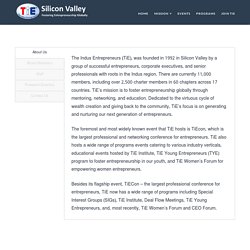 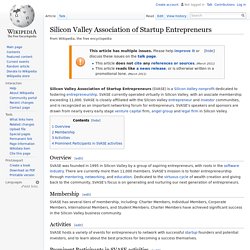