The goal of the ongoing project was (and is) to take a comprehensive, data-driven dive into what makes tech startups successful — and not so successful. Out of its research came, among other things, Startup Compass: A free benchmarking tool that leverages its data to allow entrepreneurs to evaluate their progress compared to other startups in their space. The product’s overarching goal is to allow founders to make more informed product and business decisions by “utilizing a data-driven feedback loop,” according to its mission statement. What Lucky People Do Different. Today’s guest contributor is former Wall Street Journal and Fortune writer, Erik Calonius. 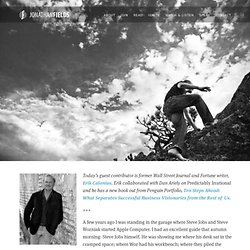 Erik collaborated with Dan Ariely on Predictably Irrational and he has a new book out from Penguin Portfolio, Ten Steps Ahead: What Separates Successful Business Visionaries from the Rest of Us. A few years ago I was standing in the garage where Steve Jobs and Steve Wozniak started Apple Computer. I had an excellent guide that autumn morning: Steve Jobs himself. He was showing me where his desk sat in the cramped space; where Woz had his workbench; where they piled the boxes of freshly built Apple I’s. “Look at this,” he exclaimed, pointing to the far wall. Today we certainly know what a personal computer is. The thing we don’t know today concerns Steve himself. But there’s another other issue at play in Steve’s illness, and Jonathan, I think you raised it your recent post, Dust in the Wind.

Recently I stumbled upon a Stanford graduation address that answers that question surprisingly well. Real Dan Lyons Web Site » Blog Archive » Hit men, click whores, and paid apologists: Welcome to the Silicon Cesspool » Real Dan Lyons Web Site. It’s tough being a journalist, especially if you’re covering technology and living in Silicon Valley, because it seems as if everyone around you is getting fabulously rich while you’re stuck in a job that will never, ever make you wealthy. 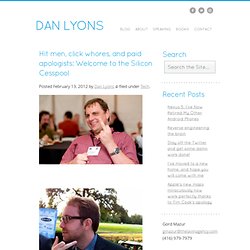 What’s worse is that all these people who are getting rich don’t seem to be any brighter than you are and in fact many of them don’t seem very bright at all. So of course you get jealous. And then you start thinking maybe you could find a way to cash in on this gold rush. But how do you make gobs of money when your only marketable skill involves writing blog posts? This is the conundrum, but lately I’ve been thinking of a business plan that sounds like it could work. So you raise $10 million or $20 million, and now you’re an “angel investor.” In fact this is a new version of an old racket that used to be practiced in the tech space by guys who called themselves “independent analysts.” Anyway — Path comes under fire, and guess who rides to the rescue? Turning Girls into Tech Entrepreneurs with a Single App. Diana Gong is only 17 years old, but already she’s had experience creating a mobile app, writing a business plan, and pitching it to venture capitalists. 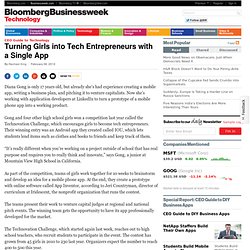 Now she’s working with application developers at LinkedIn to turn a prototype of a mobile phone app into a working product. Gong and four other high school girls won a competition last year called the Technovation Challenge, which encourages girls to become tech entrepreneurs. Their winning entry was an Android app they created called IOU, which lets students lend items such as clothes and books to friends and keep track of them. “It’s really different when you’re working on a project outside of school that has real purpose and requires you to really think and innovate,” says Gong, a junior at Mountain View High School in California.

As part of the competition, teams of girls work together for 10 weeks to brainstorm and develop an idea for a mobile phone app. The Dirty Little Secret Of Silicon Valley's Startup Boom... Posted by Tom Foremski - February 3, 2012 In San Francisco cafes and bars, even on the street, I overhear people talking about their startup ideas, business plans, and goals.

And there are tons of incubators, Angels, wannabe Angels, VC firms, making investments in startups. And there's lots of money being made, especially among the Super Angels, the incubators such as Y Combinator, the micro-VCs, and people such as Jeff Clavier, Dave McClure, who have made fortunes selling startups to larger companies. Sometimes startup teams can go from seed to exit in under a year.

For the investors, making dozens of $10K to $25K seed investments, can be tremendously lucrative. Just one $25 million payday from the sale of a startup will more than cover an Angel investor's loss from a hundred dud $25K investments - which is a loss of just $2.5 million. And there's no shortage of startups looking for seed investments.