Meet the woman who turned a school bus into a mobile financial literacy hub. Marsha Barnes has never been a fan of blending in, so when the Charlotte, N.C., native decided to start a financial coaching business, she knew leasing a standard office space was out of the question. 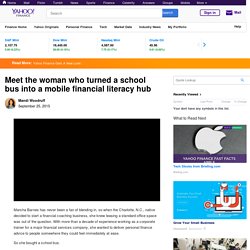 With more than a decade of experience working as a corporate trainer for a major financial services company, she wanted to deliver personal finance advice to people somewhere they could feel immediately at ease. So she bought a school bus. “A school bus, to me, speaks to learning and being in a classroom environment,” says Barnes, 40. She originally thought of going for a food truck, a popular staple in the Charlotte food scene. But for practical reasons (like limited space and lack of windows), a school bus made more sense. She found the bus, a 45-foot gas guzzler, on — where else? TaLaya Brown, 30, a self-employed manicurist, first sought out Barnes for advice on how to budget for both business and personal expenses. 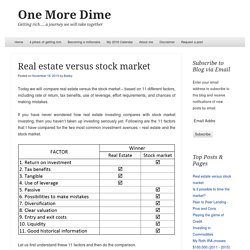 If you have never wondered how real estate investing compares with stock market investing, then you haven’t taken up investing seriously yet. Following are the 11 factors that I have compared for the two most common investment avenues – real estate and the stock market. Let us first understand these 11 factors and then do the comparison. Now let us compare real estate and stock market: Rate of Return S&P 500 has historical returns of 10.3% while real estate has returned 2% – 4%. A friend of mine argued with me saying there is huge potential for capital appreciation. This 3.8% is also high in my humble opinion – because the data started with Jan 2000 – and the real estate prices increased significantly during 2000 – 01 time frame (more than 12% in 2000 itself). Tax benefits Tangible Passive. Our Dangerous Obsession With The MVP. Editor’s note: Bill Aulet is the managing director of the Martin Trust Center for MIT Entrepreneurship and a senior lecturer at the MIT Sloan School of Management. 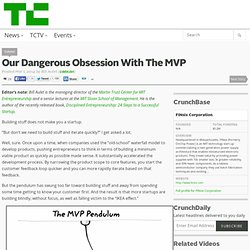 He is the author of the recently released book, Disciplined Entrepreneurship: 24 Steps to a Successful Startup. Building stuff does not make you a startup. “But don’t we need to build stuff and iterate quickly?” I get asked a lot. Well, sure. But the pendulum has swung too far toward building stuff and away from spending some time getting to know your customer first. Illustration: Marius Ursache The IKEA effect, coined by Michael Norton, Daniel Mochon, and Dan Ariely, is that when you make something yourself, you value it way more than you should. As soon as we build something, we all tend to move increasingly from inquiry mode to advocacy mode at the very time where the former is needed and the latter can blind us. 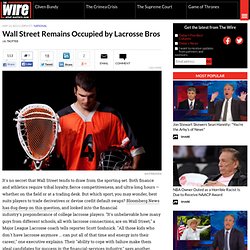 Both finance and athletics require tribal loyalty, fierce competitiveness, and ultra-long hours — whether on the field or at a trading desk. But which sport, you may wonder, best suits players to trade derivatives or devise credit default swaps? Bloomberg News has dug deep on this question, and looked into the financial industry's preponderance of college lacrosse players. "It's unbelievable how many guys from different schools, all with lacrosse connections, are on Wall Street," a Major League Lacrosse coach tells reporter Scott Soshnick.

"All those kids who don't have lacrosse anymore ... can put all of that time and energy into their career," one executive explains. What Entrepreneurs Should Learn from John Lackey. Bill Aulet11/25/13 Success in business is out of reach to those who aren’t already blessed with plentiful advantage, so goes the conventional wisdom. 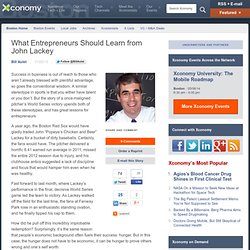 A similar stereotype in sports is that you either have talent or you don’t. But the story of a once-maligned pitcher’s World Series victory upends both of these stereotypes, and has great lessons for entrepreneurs. A year ago, the Boston Red Sox would have gladly traded John “Popeye’s Chicken and Beer” Lackey for a bucket of dirty baseballs. Certainly, the fans would have. Fast forward to last month, where Lackey’s performance in the final, decisive World Series game led the team to victory. How did he pull off this incredibly improbable redemption? (Red Sox pitcher John Lackey tips his hat to fans after pitching a brilliant game that ultimately won the World Series for the Boston team this year. In Lackey’s case, that would have been his 2011 and 2012 seasons, compounded by Red Sox organizational woes during that time.