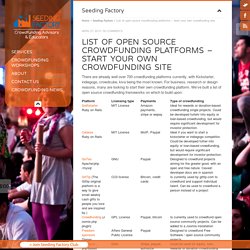 For business, research or design reasons, many are looking to start their own crowdfunding platform. We’ve built a list of open source crowdfunding frameworks on which to build upon: Platform Licensing type Payments Type of crowdfunding MIT License Amazon payments, stripe or wepay Ideal for rewards or donation-based crowdfunding single projects. MoIP, Paypal Ideal if you want to start a kickstarter or indiegogo competitor. Paypal. Enterprise Drupal & Mobile Apps. Partners for Social Enterprise Shropshire (PSE) This site uses cookies to store information on your computer. 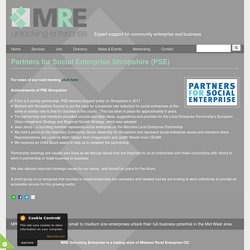 Some cookies on this site are essential, and the site won't work as expected without them. These cookies are set when you submit a form, login or interact with the site by doing something that goes beyond clicking on simple links. We also use some non-essential cookies to anonymously track visitors or enhance your experience of the site. If you're not happy with this, we won't set these cookies but some nice features of the site may be unavailable. By using our site you accept the terms of our Privacy Policy. Social enterprise. What are social enterprises? 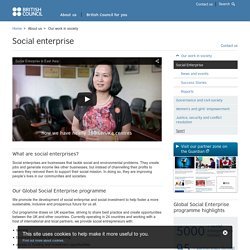 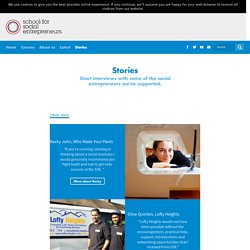 Free Photo: Alone, Walking, Night, People, City - Free Image on Pixabay - 764926. UK Pensioners Flood Helpline Due to Loneliness, Isolation and Neglect. Pensioners around Britain have flooded a helpline to deal with loneliness, isolation and neglect during the first year since it was established. 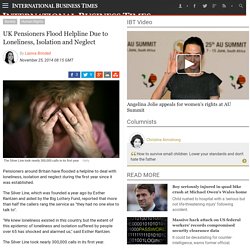 The Silver Line, which was founded a year ago by Esther Rantzen and aided by the Big Lottery Fund, reported that more than half the callers rang the service as "they had no one else to talk to". "We knew loneliness existed in this country, but the extent of this epidemic of loneliness and isolation suffered by people over 65 has shocked and alarmed us," said Esther Rantzen. The Silver Line took nearly 300,000 calls in its first year. "Many of our callers ring us on a regular basis because they tell us we are the reason they can get through the day. " The Silver Line offers the elderly information, friendship and advice, as well as befriending calls to alleviate loneliness or isolation.

Setting up and running a charity: Setting up a charity. Streetlife - the local social network. Corporate Responsibility. Supporting our communities. Community Foundation for Surrey. The Community Foundation for Surrey manages and distributes over 80 charitable funds for individuals, families, groups and companies who want to support their local communities. 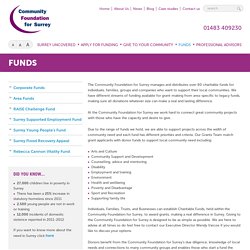 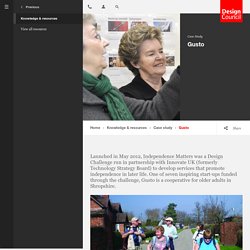 One of seven inspiring start-ups funded through the challenge, Gusto is a cooperative for older adults in Shropshire. The problem The traditional model of social care looks at providing for a need. Recognising that the future of social care lies in building independence and resilience, Gusto focuses on enabling older people to lead more independent lives, in turn reducing pressure on the formal care structure. The solution. Independence Matters. Launched in May 2012, Independence Matters was a Design Challenge run in partnership with Innovate UK (formerly Technology Strategy Board) to develop services that promote independence in later life. 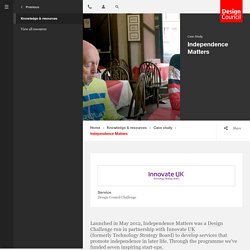 Through the programme we've funded seven inspiring start-ups. The problem Like other developed economies, the UK has a rapidly ageing population. Over the next 25 years, the number of people aged 65+ will rise from 10.1 million to 16.7 million – an increase of 6.6 million people. Gloucestershire praised for tackling social isolation among elderly residents in communities. Chit Chat which meets every week at St James Church in Quedgeley Comments (0) Efforts to cut reduce social isolation are at their greatest in Gloucestershire, a report has claimed. 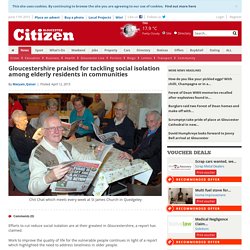 Work to improve the quality of life for the vulnerable people continues in light of a report which highlighted the need to address loneliness in older people. The Campaign to End Loneliness and the University of Kent has said and Gloucestershire County Council is already leading the way in implementing initiatives to get elderly residents active. Last year St James's Church in Quedgeley launched a group called Chit Chat with Gloucestershire County Council funding. The group, which provides social activities for the elderly, received £1,820 which was spent on setting up costs. Jackie Hall, who runs the group, said: "When we started the group in September last year we were approached by many elderly residents who said there was very little for them to do in the area. Untitled. Hampshire County Council and its telecare partner, Argenti are launching three trial schemes using the latest technology to help tackle social isolation among Hampshire's older population. 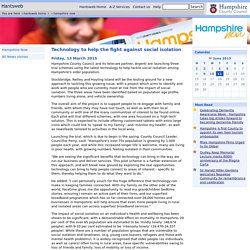 Stockbridge, Netley and Hayling Island will be the testing ground for a new approach to tackling this growing issue, with a project which aims to identify and work with people who are currently most at risk from the impact of social isolation. The three areas have been identified based on population age profile, numbers living alone, and vehicle ownership. The overall aim of the project is to support people to re-engage with family and friends, with whom they may have lost touch, as well as with their local community or with one of the many communities of interest to be found online. Research: Social isolation in older people. Older people often identify social inclusion as important to their quality of life and independence. They want to have good relationships with family and friends, to have a role, to feel useful and to be treated with respect. Combating social isolationCommunity Network.

They say if you give a man a fish, he will eat for a day, but if you teach a man to fish, he will eat for a lifetime. The same logic can be applied to approaches to addressing loneliness. In the UK, befriending services are big business for organisations looking to tackle the silent killer of confidence, the slasher of self-esteem and the hammerer of health and well-being; social isolation and loneliness. Charities across the UK are able to provide a menu of befriending options to those enquiring about support, as one size doesn’t fit all. What we doCommunity Network. Community Network is a charity that tackles loneliness and social isolation using telecommunications. In a world where people have more ways of communicating than ever before, it is easy to forget that many people are lonely, bored or lacking in mental stimulation. Sadly, loneliness and social isolation often go hand in hand with poor physical and mental health. Experiencing loneliness is as dangerous to health as smoking 15 cigarettes a day, is more harmful than obesity and linked to heart disease and dementia.

By setting up Talking Communities, we offer a simple way to socialise that is also accessible to some of the people most affected by loneliness including older people, carers and disabled people with mobility problems. However our groups are not just for the socially isolated. Talking Communities is a programme that joins up people in groups on the telephone and online. Telephone Communities are phone based groups. Breaking Bread Together: tackling social isolation & hunger with food waste. Food poverty in the UK has increased by more than 160 per cent in the past year, according to some estimates. Yet, 98 per cent of edible surplus food is thrown away by grocers and retailers. “In the UK, an estimated 20 million tonnes of food is wasted each year across the supply chain (from plough to plate) with at least 400,000 tonnes of this thrown away at retail level,” according to FoodCycle, which served more than 31,000 meals last year to people in need. With the help of volunteers working at community hubs, FoodCycle sources surplus food from retailers and prepares hot, nutritious meals for vulnerable community members.

Group activities are also especially helpful.We can identify several aspects of promising practice, but further evaluations are necessary to identify the most effective work in this field. This Insight was written by Emma Collins (IRISS). Prevention has been identified as a key aspect of Scottish public service reform. Strong communities, wellbeing and resilience. About us. £6 million for Leeds to reduce social isolation of older people - Tenfold. Leeds’ most socially isolated older people are to benefit from a £6 million grant from the Big Lottery Fund which will also help pave the way for support for future older generations. Leeds Older People’s Forum (LOPF) has been awarded £5,985,918, over six years, to lead a partnership of voluntary, statutory and private sector organisations to help older people who are restricted to their homes thorough disability, dementia, physical or mental ill health, carers, living alone and coping with bereavement, retirement or poverty.