The 20 Best Small Towns to Visit in 2017. Your favorite small town probably doesn’t look quite like how Norman Rockwell drew it. 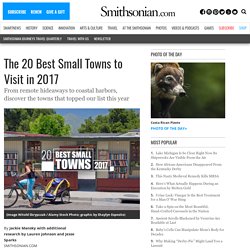 Small towns may be united by their modest population sizes, but they’re remarkable for their diversity of character. And so for the sixth-annual round of Smithsonian.com's America’s Best Small Towns, we set out on a quest to find 20 great slice-of-life (and if you’re Rockland, Maine, also award-winning slice-of-pie) small towns full of unique flavor. To help us on our task, we once again consulted geographical information company Esri (which sorts towns with a population under 20,000) to identify tiny towns chock full of local culture, history and natural beauty. We then narrowed down our list to pinpoint the destinations that are especially worth making the trip to this year—whether they’re celebrating a special birthday, commemorating a famous resident or happen to be smack on the path of the “Great American Eclipse.” ​

Daily19. Los Angeles has 23 of the 57 California companies in the most recent Fortune 500. 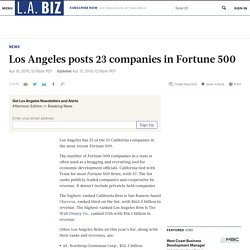 The number of Fortune 500 companies in a state is often used as a bragging and recruiting tool for economic development officials. California tied with Texas for most Fortune 500 firms, with 57. The list ranks publicly traded companies and cooperative by revenue. It doesn't include privately held companies The highest-ranked California firm is San Ramon-based Chevron, ranked third on the list, with $163.5 billion in revenue. Other Los Angeles firms on this year’s list, along with their ranks and revenues, are: 61. No. 1 on this year's list was Bentonville, Ark. Reporting from Sam Black of the Minneapolis-St. Best Places to Work in Los Angeles, CA. 5 of LA's top companies to work for right now. Whether you're an active job seeker or just curious to see what's available, LA is bursting at the seams with great tech jobs. 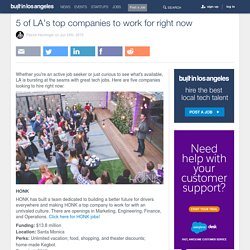 The Top 100 Tech Companies in LA. *Rank is determined by total Los Angeles County-based employees at digital technology companies as of August 2015. 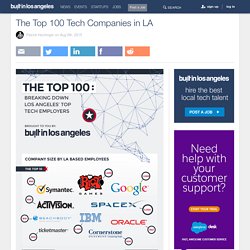 *MaxCDN, Cargomatic, and Retention Science all reported the same number of employees and therefore share the 100th spot * Correction: Five companies were wrongfully ommited from the list including Demand Media (350+), Media Temple (230+), Zealot Networks (225+), Dun & Bradstreet (150+), and Thrive Market (60+). We apologize for this error. We are excited to recognize The Top 100 Tech Employers in Los Angeles. These digital companies have driven an impressive amount of economic growth by creating almost 28,000 jobs and have played a large part in making LA the third best startup ecosystem in the world. Startup Accelerators, Incubators, and Coworkign Spaces in Los Angeles, San Diego, and Southern California. Launchpad LA. Launchpad LA is a startup accelerator in Santa Monica, CA. 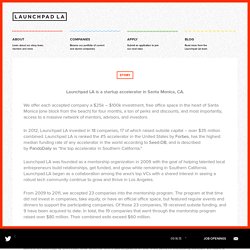 We offer each accepted company a $25k – $100k investment, free office space in the heart of Santa Monica (one block from the beach) for four months, a ton of perks and discounts, and most importantly, access to a massive network of mentors, advisors, and investors. In 2012, Launchpad LA invested in 18 companies, 17 of which raised outside capital – over $35 million combined. Launchpad LA is ranked the #5 accelerator in the United States by Forbes, has the highest median funding rate of any accelerator in the world according to Seed-DB, and is described by PandoDaily as “the top accelerator in Southern California.” Launchpad LA was founded as a mentorship organization in 2009 with the goal of helping talented local entrepreneurs build relationships, get funded, and grow while remaining in Southern California.