How Paypal and Reddit faked their way to traction — Design + Startups. There were several factors that contributed to YouTube becoming the #1 video sharing service on the web. 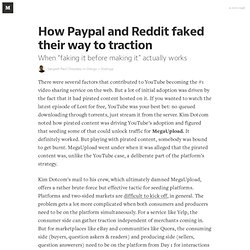 But a lot of initial adoption was driven by the fact that it had pirated content hosted on it. If you wanted to watch the latest episode of Lost for free, YouTube was your best bet: no queued downloading through torrents, just stream it from the server. Kim Dotcom noted how pirated content was driving YouTube’s adoption and figured that seeding some of that could unlock traffic for MegaUpload. It definitely worked. But playing with pirated content, somebody was bound to get burnt. Kim Dotcom’s mail to his crew, which ultimately damned MegaUpload, offers a rather brute-force but effective tactic for seeding platforms. Some community owners, as in the case of MegaUpload, solve this by creating a false aura of activity using a variety of methods. There are typically three ways of going about this: Seeding and Weeding Seeding Demand In the book, Paypal Wars, Eric M.

Seeding Supply. Quick Sprout — I'm Kind of a Big Deal. Founder's Dilemmas: Equity Splits. The following is an excerpt from HBS Professor Noam Wasserman’s new book, The Founder's Dilemmas: Anticipating and Avoiding the Pitfalls That Can Sink a Startup. 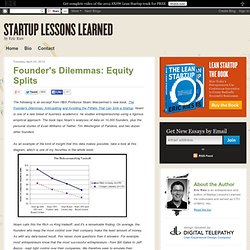 Noam is one of a rare breed of business academics: he studies entrepreneurship using a rigorous empirical approach. The book taps Noam’s analyses of data on 10,000 founders, plus the personal stories of Evan Williams of Twitter, Tim Westergren of Pandora, and two dozen other founders. As an example of the kind of insight that this data makes possible, take a look at this diagram, which is one of my favorites in the whole book: Noam calls this the Rich vs King tradeoff, and it's a remarkable finding. On average, the founders who keep the most control over their company make the least amount of money. I was lucky enough to get to read a version of the book when it was still in draft form. "If you're starting a new company, you probably already know that a crazy variety of landmines await you. How To Build An Online Community: The Ultimate List Of Resources (2012) The real way to build a social network. If there is a guru of networking, it is Reid Hoffman. 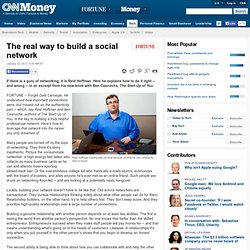 Here he explains how to do it right -- and wrong -- in an excerpt from his new book with Ben Casnocha, The Start-Up of You. Reid Hoffman travels with several devices so that he can constantly stay in touch. FORTUNE -- Forget Dale Carnegie. He understood how important connections were, but missed out on the authenticity part -- which, say Reid Hoffman and Ben Casnocha, authors of The Start-Up of You, is the key to building a truly helpful professional network.

Here's how to leverage that network into the career you only dreamed of. Many people are turned off by the topic of networking. Luckily, building your network doesn't have to be like that. Building a genuine relationship with another person depends on at least two abilities. The second ability is being able to think about how you can collaborate with and help the other person rather than thinking about what you can get. Follow that model. Strengthen your alliances. A VC. Crowdsourcing Demand. One of my favorite features in a web application is Demand It! 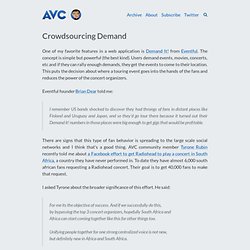 From Eventful. The concept is simple but powerful (the best kind). Users demand events, movies, concerts, etc and if they can rally enough demands, they get the events to come to their location. This puts the decision about where a touring event goes into the hands of the fans and reduces the power of the concert organizers. Eventful founder Brian Dear told me: I remember US bands shocked to discover they had throngs of fans in distant places like Finland and Uruguay and Japan, and so they'd go tour there because it turned out their Demand it!

The Startup Curve. I'm working with a few startups right now that are in various phases of Paul Graham's startup curve: Many people think startups are up and to the right all the time. 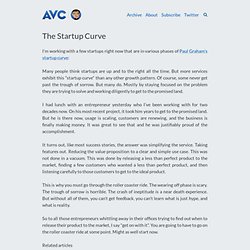 But more services exhibit this "startup curve" than any other growth pattern. 10 entrepreneurs disrupting the African energy business. The coalition of No. It's easy to join. 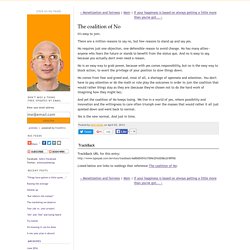 There are a million reasons to say no, but few reasons to stand up and say yes. No requires just one objection, one defensible reason to avoid change. No has many allies--anyone who fears the future or stands to benefit from the status quo. And no is easy to say, because you actually don't even need a reason. No is an easy way to grab power, because with yes comes responsibility, but no is the easy way to block action, to exert the privilege of your position to slow things down. No comes from fear and greed and, most of all, a shortage of openness and attention. And yet the coalition of No keeps losing.