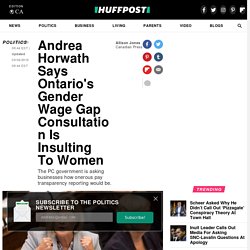 The Progressive Conservative government paused implementation last year of a law from the previous Liberal government that would require all publicly advertised job postings to include a salary rate or range, bar employers from asking about past compensation, prohibit reprisal against employees who discuss compensation and require large employers to track and report compensation gaps. Based on the most recent data from Statistics Canada, the gender wage gap accounting for the annual earnings of all workers is 29.3 per cent, meaning that women earn about 71 cents for every dollar that men earn.

The gap for annual earnings of full-year, full-time workers is 22.6 per cent, as more women than men are in part-time work. And when using hourly wage rates, the gap is 11.3 per cent. A year of Ontario’s Bill 148: Not what the big business lobby predicted. By David Bush A full year of big changes to labour law in Ontario has just passed. 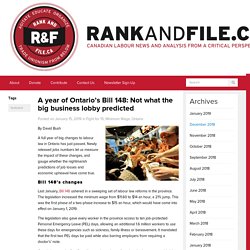 Newly released jobs numbers let us measure the impact of these changes, and gauge whether the nightmarish predictions of job losses and economic upheaval have come true. Bill 148’s changes. Narcity. This tax perk for wealthy CEOs will cost Canada $840M this year. It's called the stock option deduction — a tax break for employees that critics say largely benefits wealthy corporate executives. 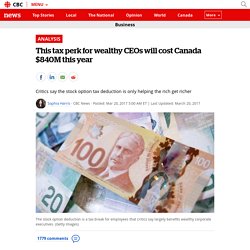 According to the finance department, keeping this perk intact will cost Ottawa a projected $840 million this year. Canada's top CEOs earn 200 times an average worker's salary: report. ​Shortly before 11 a.m. today, the average top-earning CEO in Canada will have already earned — in less than one work day — what the average worker makes in an entire year, says a new study. 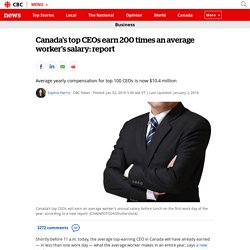 The Canadian Centre for Policy Alternatives report examined the 100 highest-paid CEOs at TSX-listed companies for 2016. Toronto café follows through with Ontario's scrapped $15 minimum wage. Although the PC government scrapped this year's planned minimum wage increase to $15, a downtown Toronto café says it's following through with the increase anyway. 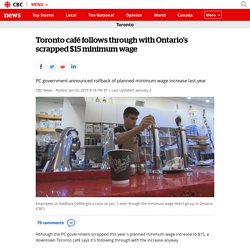 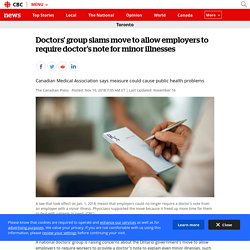 Canadian Medical Association president Dr. Gigi Osler says the measure — included in the government's Bill 47 — could cause public health issues, as it will lead to sick people going to the doctor's office or to work, rather than staying home. Ontario's Labour Minister’s Office Vandalized After Doug Ford Rolls Back Workers’ Rights. Doug Ford Is Wrong: The Minimum Wage Hike Hasn't Killed Businesses. Prescription for healthier population: spend more on social services. If provinces want a healthier population, they should spend less on health care and more on social services, new Canadian research suggests. 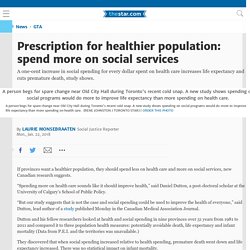 “Spending more on health care sounds like it should improve health,” said Daniel Dutton, a post-doctoral scholar at the University of Calgary’s School of Public Policy. “But our study suggests that is not the case and social spending could be used to improve the health of everyone,” said Dutton, lead author of a study published Monday in the Canadian Medical Association Journal. Dutton and his fellow researchers looked at health and social spending in nine provinces over 31 years from 1981 to 2011 and compared it to three population health measures: potentially avoidable death, life expectancy and infant mortality (Data from P.E.I. and the territories was unavailable.)

They discovered that when social spending increased relative to health spending, premature death went down and life expectancy increased. PARKIN: On minimum wage, low-wage advocates have been so wrong for too long. Judging from the first few days of 2018, Canadians are in no mood to be lectured by the CEOs and politicians who told us low wages, privatization and tax cuts would create prosperity. 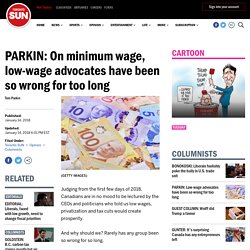 And why should we? Rarely has any group been so wrong for so long. We cut taxes. In 2000, the federal corporate tax rate was 28%. Successive Conservative and Liberal governments cut it to 15%. In 1990, tax revenue — from businesses and individuals — was 35.2% of GDP. We're Still Waiting On Trudeau's Promised Plan To Fight Poverty.

Everyone wants to help support their local food bank initiatives. 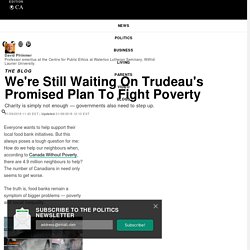 But this always poses a tough question for me: How do we help our neighbours when, according to Canada Without Poverty, there are 4.9 million neighbours to help? The number of Canadians in need only seems to get worse. The truth is, food banks remain a symptom of bigger problems — poverty and social inequality. Andrew Francis Wallace via Getty Images. Ontario's experiment with minimum wage could transform Canada's economy: Don Pittis. Reading any statement from an economist on the subject of minimum wage, you might think the eventual results are unequivocal and well understood. 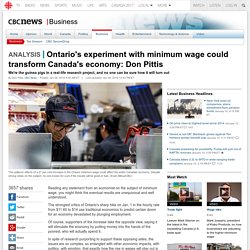 The strongest critics of Ontario's sharp hike on Jan. 1 in the hourly rate from $11.60 to $14 use traditional economics to predict certain doom for an economy devastated by plunging employment. Of course, supporters of the increase take the opposite view, saying it will stimulate the economy by putting money into the hands of the poorest, who will actually spend it. In spite of research purporting to support these opposing sides, the issues are so complex, so entangled with other economic impacts, with politics, with emotion, that exactly how the rise in wages will play out is far from certain. Economists around the world are enthralled by what is effectively a huge and radical real-life experiment. The laboratory is the Canadian economy. Ontarians now have paid sick days — the challenge is making sure they take them - Toronto.

Following the introduction of two guaranteed paid sick days for Ontario workers starting Jan. 1, 2018, advocacy groups are gearing up campaigns to make sure workers know their new rights and feel comfortable using them. Dr. Andrew Pinto, a family physician and the chair of the Decent Work and Health Network, says that after years of fighting for paid sick days, his group is now planning to create posters for clinics and doctors waiting rooms that inform patients of their right to two paid emergency leave days a year.

"I'm most concerned about vulnerable workers who maybe don't speak English," he told CBC Toronto. "What we're starting with is educating healthcare workers about how to talk to patients about their rights. " The two paid days came as part of a set of sweeping changes to the Employment Standards Act. Workers are under attack: Where is the ONDP? On January 1, Ontario's workers saw the minimum wage jump from $11.60 to $14 an hour. For the province's low-wage workers, this has been a huge benefit. Unfortunately, some employers are trying their best to push back against this new reality by cutting shifts and paid breaks, laying workers off, and even engaging in outright wage theft.

The week that followed the increase has seen Ontario become a flashpoint for a sharp and bitter ideological class war over the minimum wage. Business owners have been attacking workers and the broader public has in turn grown angry and hostile towards businesses like Sunset Grill and our beloved Tim Horton's. The hashtag #boycottTimHortons has been trending on Twitter for the last number of days. In this context Premier Wynne took to the media, calling the Tim Hortons franchise owners bullies. Uk.businessinsider. Nick Hanauer. _ From the fear-mongering headlines marking passage of $15 statutes in New York and California, you would think nobody ever dared raise the minimum wage before. "Raising minimum wage risky," the Lexington (Kentucky) Herald-Leader tersely warned. "Raising minimum wage hurts low-skill workers," the Detroit News bluntly declared. Ontario becomes 2nd province to go ahead with $15 an hour minimum wage - Toronto.

Ontario Premier Kathleen Wynne has announced a plan to increase the provincial minimum wage to $15 an hour by Jan. 1, 2019. The increase would be phased in over the next 18 months, rising to $14 an hour on Jan. 1, 2018, and then to $15 the following January. After that, it will rise annually with inflation. "People are working longer, jobs are less secure, benefits are harder to come by and protections are fewer and fewer," said Wynne. "In a time of change like this, when the very nature of work is being transformed, we need to make certain that our workers are treated fairly. " Currently, Ontario's minimum wage is $11.40 an hour. Across Canada, the current minimum ranges from $10.72 in Saskatchewan to $13 in Nunavut. Minimum wage raise announcement coming Tuesday, Ontario premier says - Toronto.

15 Things That Would Change If You Had A Guaranteed Basic Income. Ontario to consider boosting minimum wage to $15, increasing paid sick days - Toronto. Ontario basic income pilot project to launch in Hamilton, Lindsay and Thunder Bay - Hamilton. Sid Ryan: When Hudak Says "Flexible" Labour, He Really Means "Cheap" Sonia Sotomayor: Not Everyone Can Just Pull Themselves 'Up By The Bootstraps'