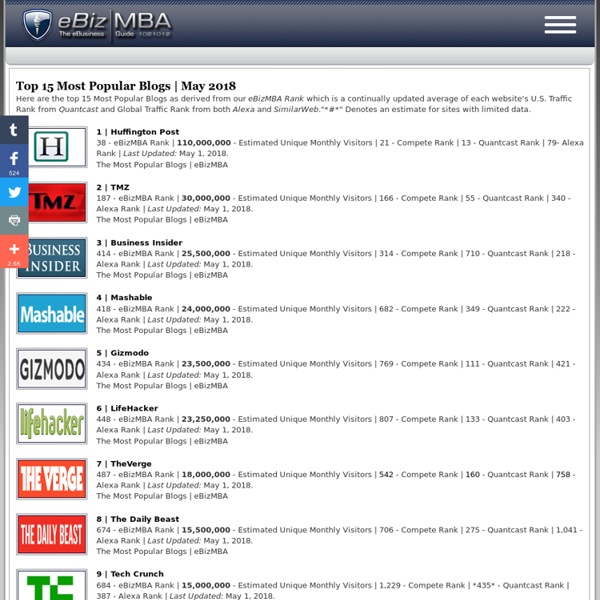 The 100 Best, Most Interesting Blogs and Websites of 2013 Editor’s note: 2015’s list of the best, most interesting websites has arrived! Welcome to one of the web’s most anticipated lists of the year: The 100 Best, Most Interesting Blogs and Websites of 2013. This is the second such list I have made since founding DailyTekk and it’s very special. A website can only be featured ONCE in this annual series, so make sure to check out last year’s list so you don’t miss 100 other amazing sites and blogs. When I make this list I consider 3 things: content, design and style (you know, that x-factor that really makes a site stand out). Apparently, as of March 2012 there were 644,275,754 active websites (according to Business Insider) and you know the number has done nothing but rocket up since then. Cool DailyTekk – The best tech site you’ve never heard of. Viral Culture News Quartz – Digitally native news outlet. Design Humor Men Women Photo Video Audio Read Tech Smart Geek Good Environment Politics Can’t Miss

Arts and Style - Gossip Boys For those unfamiliar with good-natured celebrity news site JustJared.com and the supremely smutty gossip blog Dlisted.com, the author of the latter, who goes by Michael K, offers this comparison: "JustJared is like the best seat at an Outback Steakhouse and I'm a takeout carton from Chili's To Go." In other words, overindulging in either can leave you feeling a bit queasy, and one is nicer than the other. Although JustJared, founded and edited by Jared Eng, and Dlisted's voices couldn't be more different -- Eng refers to Britney Spears as a "pop princess" while K's dubbed her "Our Lady of Cheetos" -- they're both shepherds of a new wave of online celebrity gossip, driven less by hysterical headlines and dubious quotes from anonymous sources who are "close to the actress" and more by their own personal tastes. Here, both men reveal more about their sites, their styles and what happens when Tina Fey starts reading. Pictured above: (L-R) Dlisted's Michael K and JustJared's Jared Eng

The world's 50 most powerful blogs | Media | The Observer The following apology was published in the Observer's For the record column, Sunday March 16 2008 The article below said 'Psychodwarf' was Beppe Grillo's nickname for 'Mario Mastella, leader of the Popular-UDEUR centre-right party', but it's actually his nickname for Silvio Berlusconi. Mastella's first name is Clemente and Popular-UDEUR was part of Romano Prodi's centre-left coalition. And Peter Rojas, not Ryan Block, founded Engadget and co-founded Gizmodo. Apologies. 1. The history of political blogging might usefully be divided into the periods pre- and post-Huffington. Bloggers saw themselves as gadflies, pricking the arrogance of established elites from their home computers, in their pyjamas, late into the night. But the pyjama purists were confounded. To borrow the gold-rush simile beloved of web pioneers, Huffington's success made the first generation of bloggers look like two-bit prospectors panning for nuggets in shallow creeks before the big mining operations moved in. 2. 3.

Top Earning Blogs | Make Money Online Blogging Superstar Bloggers Making Fortunes Online Today I decided to research how much my favorite blog’s are earning every month and I wasn’t surprised to see some of them make over $100,000 per month. These are blogs and success stories that have inspired me to become a blogger. These Superstar bloggers continue to inspire me to this day – and they have kept me motivated to not give up whenever it got tough, especially in the early days. I hope this inspires you. Special Notes: 1) To give you some idea of the potential available – top blogging network, Weblogs, Inc. is believed to earn about $30 million a month revenue from 13 million unique visitors. 2) And it is not just about making money monthly it is also about building a BUSINESS that can be sold, such as 22 year old Johns Wu did when he sold his blog for $15 Million. Disclaimer: Check out the TOP EARNING BLOGS list below. To Our Blogging Success, Michael 30 Blog’s That Make A Lot Of Money Online How They Make Money From Blogging Michael Dunlop

Open Culture Did Perez Hilton really lose once-in-a-lifetime deal? | SEO Consultants London | SEO Consultancy Services London, UK digg Sharebar I guess you already know that Perez Hilton was offered $20 million as a part of buyout his blog PerezHilton.com by Eight Days., Zack Taylor Group and Dirty World, LLC. – $18 million up front, and $2 million in escrow for a year. As soon as the proposal came out, Perez Hilton rejected the offer and responded at an interview with US Weekly Magazine: There are reports you’re getting ready to sell your blog for $20 million. No. In response to that Zack Taylor said : The funny thing is that we were 100% serious about this offer, and I personally find the way Perez responded publicly to our business inquiry to be very ignorant, and a poor reflection of his character / brand… Maybe he should have done some research on everything for once, or contacted our lawyers, before jumping to conclusions. Hopefully he won’t regret turning down this once-in-a-lifetime deal!! My question: Let’s see some stats: Perez Hilton is probably the most loved and hated blogger in Hollywood. Take care, bye.

NOTCOT.ORG 8 things every blogger can learn by studying Perez Hilton Mario Lavandeira has made millions as the person behind PerezHilton.com. Perez Hilton celebrity gossip is read by millions every day and he is one of the most visible and popular bloggers online. The site now averages 260 million page views a month, hit a record day with 13.9 million page views this week and has a very loyal readership. Find a topic there is an audience for. Incorporating these 8 steps into your daily blogging will make sure that your site gets more attention, gets an increased readership, gets forwarded and shared virally and will ensure that you build your profile, your brand and increase your traffic.

Talks at Google – Google About the Talks at Google program Talks at Google began in 2005 as the Authors@Google series to bring innovative authors to speak at Google. The program has since grown to include musicians, filmmakers, chefs, intellectuals, and innovators. The program brings speakers of all stripes to Google for talks centering on their recently published books and to discuss topics capturing the intellectual zeitgeist of the day. Locations We host talks at our offices throughout the world. At Google Speakers Past participants have ranged from novelist Salman Rushdie and economist Jeffrey Sachs to journalist Bob Woodward and U.S. presidential candidates Barack Obama and John McCain. The series includes, but is not limited to Authors@Google, Artists@Google, Musicians@Google, Women@Google, Leading@Google, Health@Google, Candidates@Google, Photographers@Google, Comedians@Google, and Olympians@Google.