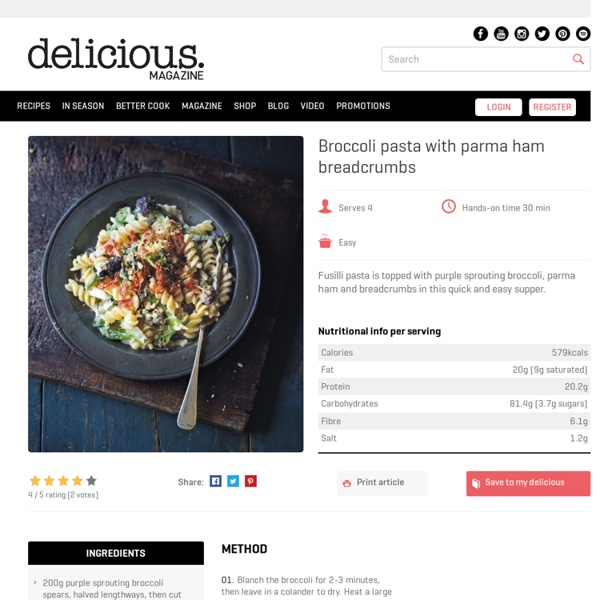 Reuben open top 2 rye bread slices50g salt beef or corned beef, sliced to your desired thickness 2 large gherkins, sliced lengthways, 5mm thick 2 slices swiss cheese, such as Emmenthal 10g butter For the dressing 2 tsp mayonnaise1 tbsp ketchup1 tsp horseradish sauce 01.To make the dressing, mix all the ingredients together and set aside.02.Heat the grill to medium. Take the rye bread and divide the salt beef between the two slices, then layer the sliced gherkins on top and finish each one with a slice of cheese.03.Heat an ovenproof, non-stick frying pan over a medium heat and add the butter. This recipe is from Toast, Hash, Roast, Mash by Dan Doherty. Amelia Freer's butternut squash 'pasta' with sage and pine nuts

Kichri with smoked haddock and pickled cauliflower recipe Step 1 At least a day before you want to serve, put the vinegar, sugar and spices into a pan and bring to a simmer. Once the sugar has dissolved take off the heat and cool. Step 2 Using a mandolin or a sharp knife, finely slice the cauliflower and add it to the pickling liquid. Step 3 The day you want to eat put the lentils in a pan with plenty of cold water and bring to the boil with the turmeric. Step 4 Put the haddock, milk, bay leaves and peppercorns in a small pan, so the fish is covered. Step 5 Heat 2 tbsp vegetable oil in a pan, add the onion and cook on a low heat until they are soft.

Roasted butternut squash and pine nut quinoa recipe • mixed dried herbs (I like oregano, herbs de provence, thyme and rosemary) • 1 tsp paprika • 1 cup of quinoa • 1 lime or lemon • a large handful of long-stemmed broccoli • a handful of fresh coriander • ⅓ of a cup of pine nuts • a dozen cherry tomatoes Preheat the ove to 190°C/gas mark 5. Slice the squash in half, then peel off the skin and remove the seeds. Place the squash on a baking dish and drizzle with olive oil, a pinch of dried herbs, a teaspoon of paprika and a sprinkling of salt. Bake for about 15 to 20 minutes, until deliciously soft. Meanwhile make the quinoa. Chop the broccoli into segments and roughly chop the coriander leaves. Toast the pine nuts in a dry frying pan on a high heat, for about three to four minutes. Slice the cherry tomatoes into quarters. Once the quinoa and the squash are cooked, remove from the heat and stir them together along with the pine nuts, a drop more lime and the cherry tomatoes. Deliciously Ella: how to go gluten-free naturally

Chifa chicharonnes recipe Step 1 Heat the oven to 110C/fan 90C/gas ¼. Put the belly in a large deep roasting tray, adding the roughly chopped garlic, onion, carrot, rosemary, thyme, peppercorns and 1 tbsp salt. Step 2 Once cooked, remove from the oven and cool in the cooking liquor. Step 3 Using a fryer, or in a deep pan no more than 1/3 full, heat the oil to 180C or until a cube of bread browns in 30 seconds. Step 4 Toss the crispy chicharonnes with the kecap manis or sweet soy sauce in a bowl and leave for 1 minute to soak it up. Step 5 To serve, stack several chicharonnes up, pouring some of the sweet soy over them and garnish with coriander and red pepper.

Spiced potatoes cooked in a cashew nut paste with fennel, coriander & cardamom Feel-good food from the Deep South I have fond memories, too, of eating Southern food in New Orleans, where they work wonders with aubergines and a roux. But there has always been a gap between the food I imagined and what I ate here in Britain, even the dishes I tried myself. I can turn out pretty good fried chicken and rice and bean dishes but my range is limited. Foodies kept raving about its Southern delights – oh, the cornbread, with its pools of honey-butter melting over the top – and I ignored them. The Lockhart's cornbread (HAARALA HAMILTON) Several hours later I stumbled out – yes, the Bourbon had claimed me again – feeling so like a schoolgirl in love that I posted embarrassing tweets until bedtime (all in adulation of The Lockhart). Diana Henry's coffee-brined pork chops (HAARALA HAMILTON) McDonald hasn’t written a book yet but the next day I bought one I’d been dithering over by another Southern chef, Sean Brock (Heritage, Artisan). What to drink with food from the Deep South?

Rick Stein's spiced lamb filo pastries with pine nuts Hasselback potatoes recipe Large new or salad potatoes would be best for this INGREDIENTS 1kg/2 ¼ lb medium-sized waxy potatoes Approximately 20 bay leaves 120g/4oz butter 2 tbsp olive oil METHOD Preheat the oven to 200C/400F/Gas 6. Using a very sharp knife, make cuts two-thirds deep into the potatoes at 2-3mm/ ¼ inch intervals (you can make sure you don’t chop all the way down by placing a wooden spoon or a chopstick on each side of the potato). Place the butter and oil and a few pinches of salt in a large baking tray and place in the oven for three minutes until the butter is melted and sizzling hot.