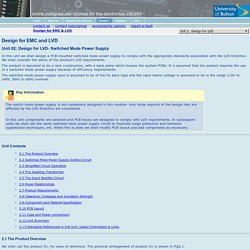 We shall consider the whole of the product's LVD requirements. The product is assumed to be a rack construction, with a back plane which houses the system PCBs. It is assumed that the product requires the use of a switched mode power supply because of efficiency requirements. The switched mode power supply used is assumed to be of the fly back type and the input mains voltage is assumed to be in the range 115V to 240V, 50Hz to 60Hz nominal. Key Information. European Commission quality standards compliance audit Rohs weee rohs compliant rohs regulations rohs symbol directive rohs test testing rohs standard compliant rohs compliance rohs 5 rohs 6 2 4 rohs components rohs certificate rohs lcd rohs pc rohs defin. Directive 2011/65/EU of the European Parliament and of the Council of 8 June 2011 on the restriction of the use of certain hazardous substances in electrical and electronic equipment RoHS (Restriction of Hazardous Substances)—Directive 2002/95/EU 1. lead (Pb) 2. mercury (Hg) 3. cadmium (Cd) 4. six valency chromium (chromium VI or Cr6+) 5. polybrominated biphenyls (PBB) 6. polybrominated diphenol-ester (PBDE) PBB and PBDE may be used as additional combustion inhibitors in the production of plastics. 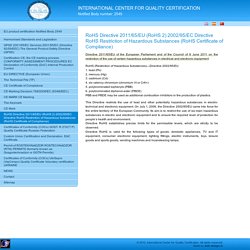 This Directive restricts the use of lead and other potentially hazardous substances in electro-technical and electronic equipment. Product safety: general rules. Directive 2001/95/EC of the European Parliament and the Council of 3 December 2001 on general product safety [Official Journal L 11 of 15.1.2002]. 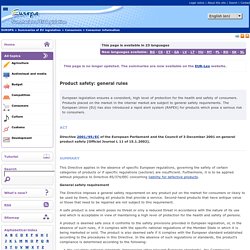 This Directive applies in the absence of specific European regulations, governing the safety of certain categories of products or if specific regulations (sectoral) are insufficient. Furthermore, it is to be applied without prejudice to Directive 85/374/EEC concerning liability for defective products. General safety requirement The Directive imposes a general safety requirement on any product put on the market for consumers or likely to be used by them, including all products that provide a service. Second-hand products that have antique value or those that need to be repaired are not subject to this requirement. International Organization for Standardization. The International Organization for Standardization (ISO) is an international standard-setting body composed of representatives from various national standards organizations. 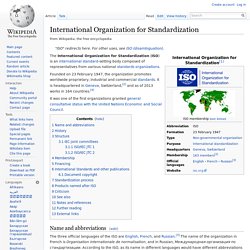 Founded on 23 February 1947, the organization promotes worldwide proprietary, industrial and commercial standards. It is headquartered in Geneva, Switzerland,[2] and as of 2013 works in 164 countries.[4] It was one of the first organizations granted general consultative status with the United Nations Economic and Social Council. Name and abbreviations[edit] The three official languages of the ISO are English, French, and Russian.[3] The name of the organization in French is Organisation internationale de normalisation, and in Russian, Международная организация по стандартизации. Both the name "ISO" and the logo are registered trademarks, and their use is restricted.[7] History[edit] Plaque marking the building in Prague where the ISO's predecessor, the ISA, was founded. Structure[edit] IEC joint committees[edit] ISO deliverables.

ISO develops the following deliverables:ISO Standards, ISO/PAS Publicly Available Specifications, ISO/TS Technical Specifications, ISO/TR Technical Reports, IWA International Workshop Agreements and ISO Guides A normative document, developed according to consensus procedures, which has been approved by the ISO membership and P-members of the responsible committee in accordance with Part 1 of the ISO/IEC Directives as a draft International Standard and/or as a final draft International Standard and which has been published by the ISO Central Secretariat. 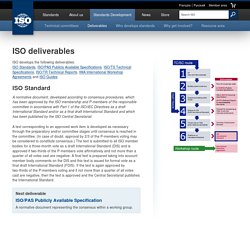 A text corresponding to an approved work item is developed as necessary through the preparatory and/or committee stages until consensus is reached in the committee. List of International Organization for Standardization standards. List of IEC standards. List of EN standards. Part 2: Approved ICT Security Standards. Introduction. 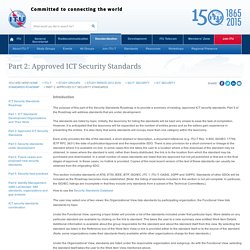 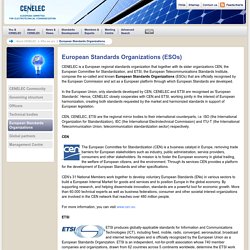 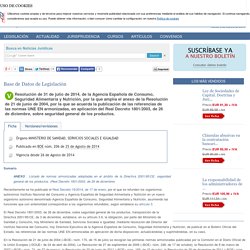 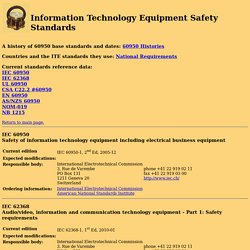