The end of capitalism has begun 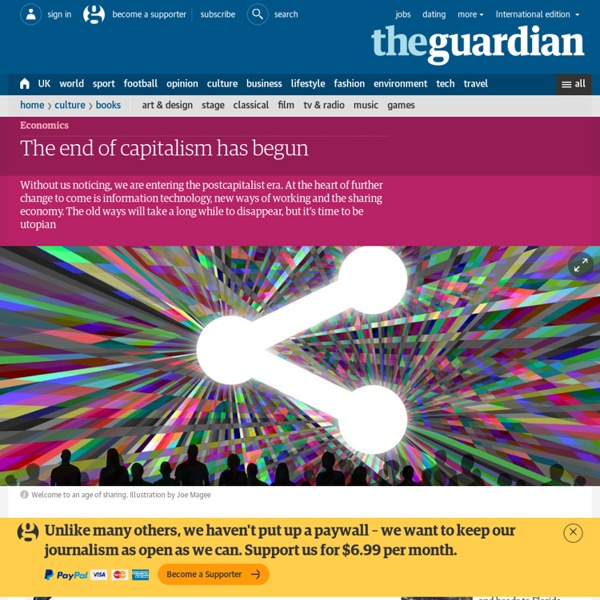 The red flags and marching songs of Syriza during the Greek crisis, plus the expectation that the banks would be nationalised, revived briefly a 20th-century dream: the forced destruction of the market from above. For much of the 20th century this was how the left conceived the first stage of an economy beyond capitalism. The force would be applied by the working class, either at the ballot box or on the barricades. Instead over the past 25 years it has been the left’s project that has collapsed. If you lived through all this, and disliked capitalism, it was traumatic. As with the end of feudalism 500 years ago, capitalism’s replacement by postcapitalism will be accelerated by external shocks and shaped by the emergence of a new kind of human being. Postcapitalism is possible because of three major changes information technology has brought about in the past 25 years. Second, information is corroding the market’s ability to form prices correctly. Yet information is abundant. Related:  Social, Economic, Political Environments

Coalition bans government's clean energy bank from financing wind power | Australia news The federal government has ordered the Clean Energy Finance Corporation (CEFC) not to make any future investments in wind power, instead focussing on “emerging technologies”, trade minister Andrew Robb has confirmed. Fairfax media reported on Sunday that the treasurer, Joe Hockey, and the finance minister, Mathias Cormann, bypassed the environment minister, Greg Hunt, in issuing the CEFC with the directive. Robb told Sky News on Sunday that that was “a total beat-up”. “Greg was fully cognisant of what was decided,” he said. “He was perhaps the principle party, along with [resources minister] Ian Macfarlane, who put together this arrangement with the crossbenchers, and he is fully cognisant of it, drove this deal and settled this deal, understood this arrangement. And now the two responsible ministers are putting it into effect.” Hunt took to Twitter on Sunday to refute the claims made in Fairfax, labelling them “factually wrong and misleading”. “Tony Abbott never looks forward.

The Australian dollar is 'smashed' and teetering over the US 70c precipice | Business The Australian dollar has been in freefall. “Smashed” was the description from a foreign exchange trader friend noting that since the peak of US$1.1080 during 2011, the dollar is now below US 75c and many strategists are now forecasting a fall below US70c and with a real risk of US60c over the next year. The Australian dollar’s fall of more than US 35c from its recent peak is substantial and reflects a buildup of negative news concerning the economy. Recently, I noted the escalation in Australia’s net foreign debt as one factor that is risking international investor confidence. Of the many other factors that tend to drive the level of the Australian dollar, almost all have been negative and are suggesting that, in the near term, there are still substantial downside risks. Commodity prices have fallen sharply, many dropping to their lowest level in a decade. Another negative influence, which is likely to persist for some time, is the record low level for Australian interest rates.

Bjørn Lomborg consensus centre could be set up at Flinders University | Australia news The federal government has held talks with Flinders University over the possibility of establishing a research centre headed by controversial academic Bjørn Lomborg. Flinders University said it had asked the department of education for information about Lomborg’s consensus centre but insisted it had not made a firm decision over whether it wanted to host the academic’s work. The federal education minister, Christopher Pyne, has vowed to find another university to take on Lomborg’s centre after the University of Western Australia decided in May to hand back $4m in federal government funding for it. The UWA opted to take the funding for the centre, only to reverse course following a backlash from its academics. Lomborg’s venture would be linked to his Copenhagen consensus centre, with a focus on aid spending and international development. Lomborg is a controversial figure among academics, particularly in the field of climate science due to his contrarian stance on the issue.

Tuvalu climate refugees granted residency in New Zealand A family from Tuvalu have been granted residency in New Zealand on humanitarian grounds. Creative Commons: Stefan Lins, 2000 A family from Tuvalu has been granted New Zealand residency after claiming they would be affected by climate change and rising sea levels if they returned home. It is the first successful application for residency on humanitarian grounds where climate change has been a factor. Sigeo Alesana and his family moved to New Zealand from Tuvalu in 2007, but has had no legal status in the country since 2009. The family’s case was originally dismissed by the tribunal in March but was successfully appealed on humanitarian grounds because of their strong family and community links to New Zealand. Mr Alesana already has six sisters and an elderly mother to care for in the country. The tribunal is also said to have acted over concerns about climate change, and particularly the vulnerability of the couple’s children to illnesses as a result of poor water quality. About the Author

Tuvalu Prime Minister Enele Sopoaga says climate change 'like a weapon of mass destruction' - Australia Network News Updated The Prime Minister of the small Pacific island nation of Tuvalu has compared climate change to a weapon of mass destruction, and warned Australia not to stand in the way of a new global agreement. Enele Sopoaga says his country and many other low-lying Pacific nations are facing serious threats from global warming. Mr Sopoaga says he'll be making his position clear when he co-chairs a UN climate change summit in New York next month. "We are caught in the middle, and certainly in Tuvalu, we are very, very worried - we are already suffering," he said. "It's already like a weapon of mass destruction, and the indications are all there. "We only need to garner strong, collective leadership - we simply are going to again underscore the message that we are dying." Mr Sopoaga says countries have to move beyond questions of political sovereignty to address the realities in his country. "We are not dealing with sovereignties any more - there are no boundaries to the effects of climate change.

Australia worst carbon emitter per capita among major western nations | Environment Australia is failing to reduce carbon emissions at a rate comparable to the US or the European Union, scientists have warned, with global emissions set to hit a record 36bn tonnes in 2013. The Global Carbon Project, which draws data from climate researchers in 10 countries, found there had been stuttering progress by countries, including Australia, in reducing emissions to a level that would lessen the chances of dangerous climate change. An “unprecedented” 36bn tonnes of CO2 is set to be pumped into the atmosphere this year, 61% higher than 1990. While this increase is below the average 3.1% annual rise seen since 2000, emissions need to “fall substantially and rapidly” if the world is to keep to an agreed target of below two degrees warming on pre-industrial levels, according to the British scientist Corinne Le Quere, lead author of the carbon project report. Australia is faring relatively poorly in this regard, the project’s data reveals.

Exxon knew of climate change in 1981, email says – but it funded deniers for 27 more years | Environment ExxonMobil, the world’s biggest oil company, knew as early as 1981 of climate change – seven years before it became a public issue, according to a newly discovered email from one of the firm’s own scientists. Despite this the firm spent millions over the next 27 years to promote climate denial. The email from Exxon’s in-house climate expert provides evidence the company was aware of the connection between fossil fuels and climate change, and the potential for carbon-cutting regulations that could hurt its bottom line, over a generation ago – factoring that knowledge into its decision about an enormous gas field in south-east Asia. The field, off the coast of Indonesia, would have been the single largest source of global warming pollution at the time. “Exxon first got interested in climate change in 1981 because it was seeking to develop the Natuna gas field off Indonesia,” Lenny Bernstein, a 30-year industry veteran and Exxon’s former in-house climate expert, wrote in the email.

Greek government-debt crisis Long-term interest rates (secondary market yields of government bonds with maturities of close to ten years) of all eurozone countries except Estonia.[1] Higher yields indicates that financial markets have serious doubts about credit-worthiness of the state.[2] Greece's debt percentage since 1977, compared to the average of the Eurozone Overview[edit] 2010–2014[edit] In April 2010, adding to news of the recorded adverse deficit and debt data for 2008 and 2009, the national account data revealed that the Greek economy had also been hit by three distinct recessions (Q3-Q4 2007, Q2-2008 until Q1-2009, and a third starting in Q3-2009),[13] which equaled an outlook for a further rise in the debt-to-GDP ratio from 109% in 2008 to 146% in 2010. 2015[edit] Financial position summary[edit] Key statistics are summarized below, with a detailed table at the bottom of the article. Greek GDP fell from €242 billion in 2008 to €179 billion in 2014, a 26% decline overall. Causes[edit] Overview[edit] [edit]

Obama unveils major climate change proposal - CNNPolitics.com "Today after working with states and cities and power companies, the EPA is setting the first ever nationwide standards to end the limitless dumping of carbon pollution from power plants," Obama said Monday from the White House, adding shortly thereafter "Washington is starting to catch up with the vision of the rest of the country. " The "Clean Power Plan" is the final version of regulations by the Environmental Protection Agency, which President Barack Obama called "the biggest most important step we've ever taken to combat climate change," in a video released by the White House on social media Saturday night. "We're the first generation to feel the impact of climate change and the last generation that can do something about it," Obama said on Monday. Busted: 3 myths about Obama's climate plan (Opinion) Under the plan, the administration will require states to meet specific carbon emission reduction standards, based on their individual energy consumption. Former Florida Gov.

Saudi Arabia may go broke before the US oil industry buckles King Salman bin Abdulaziz Al Saud Photo: Andrew Harnik/Reuters If the oil futures market is correct, Saudi Arabia will start running into trouble within two years. It will be in existential crisis by the end of the decade. The contract price of US crude oil for delivery in December 2020 is currently $US62.05, implying a drastic change in the economic landscape for the Middle East and the petro-rentier states. The Saudis took a huge gamble last November when they stopped supporting prices and opted instead to flood the market and drive out rivals, boosting their own output to 10.6 million barrels a day (b/d) into the teeth of the downturn. Illustration: Kerrie leishman Bank of America says OPEC is now "effectively dissolved". If the aim was to choke the US shale industry, the Saudis have misjudged badly, just as they misjudged the growing shale threat at every stage for eight years. One Saudi expert was blunter. The problem for the Saudis is that US shale frackers are not high-cost.