HTG Explains: The Difference Between WEP, WPA, and WPA2 Wireless Encryption (and Why It Matters) 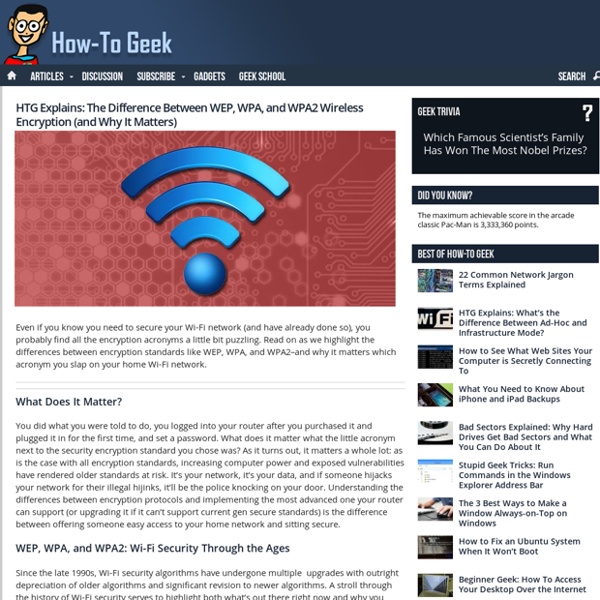 Even if you know you need to secure your Wi-Fi network (and have already done so), you probably find all the encryption acronyms a little bit puzzling. Read on as we highlight the differences between encryption standards like WEP, WPA, and WPA2–and why it matters which acronym you slap on your home Wi-Fi network. What Does It Matter? You did what you were told to do, you logged into your router after you purchased it and plugged it in for the first time, and set a password. What does it matter what the little acronym next to the security encryption standard you chose was? As it turns out, it matters a whole lot: as is the case with all encryption standards, increasing computer power and exposed vulnerabilities have rendered older standards at risk. WEP, WPA, and WPA2: Wi-Fi Security Through the Ages Since the late 1990s, Wi-Fi security algorithms have undergone multiple upgrades with outright depreciation of older algorithms and significant revision to newer algorithms.

InfoSec Handlers Diary Blog - Hashing Passwords After talking about SQL Injection, this is the second part of the mini series to help you protect yourself from simple persistent attacks as we have seen them in the last couple months. A common MO employed in these attacks is to steal passwords from a database via sql injection. Later, the attacker will try to use these passwords to break into other sites for which users may choose the same password. Of course, part of the problem is password reuse. First of all: What is hashing? Storing a password as a hash will make it difficult to figure out the actual password a user used. A hash isn't fool proof. Probably the most important defense against rainbow tables is the idea of introducing a "salt". In order to use a "salt", the salt value and the users password are first concatenated, then the string is hashed. Another trick to harden a hash is to just apply the same algorithm multiple times. Here a proposal to create difficult to reverse hashes with salt: ------ Johannes B.

Storing Passwords - done right! Written by: Christoph Wille Translated by: Bernhard Spuida First published: 1/5/2004 Viewed 257725 times. 1766 ratings, avg. grade 4.76 In very many - not to say almost all - Web applications user data is administered, from Web forum to Web shop. These user data encompass login information of the users which contain the password besides the user name - and this in plain text. A security leak par excellence. Why is storing the user name and password in plain text a security leak? Well, imagine a cracker gaining system access through eventual OS or server software errors, and being able to read the user database. How can this security risk be eliminated? What is a Salted Hash? A hash is a numerical value of fixed length which unequivocally identifies files of arbitrary legth. The reason for this is that usually so called 'Dictionary Attacks' are run against hashed passwords - a good example being the MD5 hashed passwords of NT4. Storing the Salted Hash Generating Passwords - done right!

CyberCIEGE Educational Video Game an innovative video game and tool to teach computer and network security concepts CyberCIEGE enhances information assurance and cyber security education and training through the use of computer gaming techniques such as those employed in SimCity™. In the CyberCIEGE virtual world, users spend virtual money to operate and defend their networks, and can watch the consequences of their choices, while under attack. Cyber Security Simulation In its interactive environment, CyberCIEGE covers significant aspects of computer and network security and defense. CyberCIEGE includes configurable firewalls, VPNs, link encryptors and access control mechanisms. Active Learning with CyberCIEGE This paper describes the game for educators and trainers who may want to incorporate the game into their courses. CyberCIEGE is available at no cost to agencies of the US Government by contacting cyberciege@nps.edu. You can customize and create your own scenarios using the Scenario Development Kit. Questions?

Difference between WEP, WPA and WPA2 (Which is Secure) BESbswyBESbswy AddThis What's Next Recommended for you www.guidingtech.com AddThis Hide Show Wi-Fi Protected Setup Flaws Make Wireless Network Brute-force Attacks Feasible Design flaws in the Wi-Fi Protected Setup (WPS) wireless standard can make it easier for attackers to obtain access codes for secured wireless networks by brute force. The vulnerabilities identified by security researcher Stefan Viehbock affect a large number of WPS-enabled routers and wireless access points. The WPS standard was created in 2007 by the Wi-Fi Alliance in order to provide non-technical users with a simple method of setting up wireless networks. The standard supports several Wi-Fi authentication methods including one that requires pushing a physical button on the router and one that uses a predefined PIN number printed on a sticker by the device manufacturer. The PIN-based method is mandatory for WPS-certified devices, which support it by default. The WPS PIN is an eight-digit random number. The main problem lies with how devices respond to failed WPS authentication attempts. The U.S.

untitled Computer acting funny? It may be infected with a virus! One great thing about computers is that they often warn us when something is wrong. Sometimes they suddenly slow down to a crawl, other times they start to freeze up or even crash for what seems to be no reason at all. Most of the time though, there is a reason why our computers start to act funny. One of those reasons is due to malware and viruses. No one likes to have a computer virus, but if you do happen to catch one, it’s important to know the warning signs so that you can take care of the problem as soon as possible. If you have noticed one or more of the above symptoms on your computer, it’s time to take immediate action. Be sure to share this infographic so that others can benefit as well. Abby Ryan Design | PC Ninja Featured photo credit: Graphs.net via graphs.net