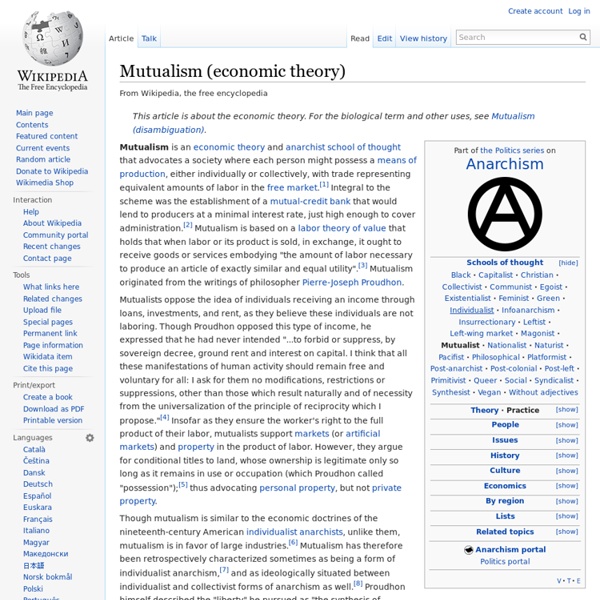 Mutualism is an economic theory and anarchist school of thought that advocates a society where each person might possess a means of production, either individually or collectively, with trade representing equivalent amounts of labor in the free market.[1] Integral to the scheme was the establishment of a mutual-credit bank that would lend to producers at a minimal interest rate, just high enough to cover administration.[2] Mutualism is based on a labor theory of value that holds that when labor or its product is sold, in exchange, it ought to receive goods or services embodying "the amount of labor necessary to produce an article of exactly similar and equal utility".[3] Mutualism originated from the writings of philosopher Pierre-Joseph Proudhon. Mutualists have distinguished mutualism from state socialism, and do not advocate state control over the means of production. Mutualism, as a term, has seen a variety of related uses. For historian of the First International G.

Louis Auguste Blanqui Louis Auguste Blanqui Louis Auguste Blanqui (French pronunciation: ​[lwi oɡyst blɑ̃ki]; 8 February 1805, Puget-Théniers, Alpes-Maritimes – 1 January 1881, Paris) was a French socialist and political activist, notable for his revolutionary theory of Blanquism. Biography[edit] Early life, political activity and first imprisonment (1805-1848)[edit] Implicated in the armed outbreak of the Société des Saisons, of which he was a leading member, Blanqui was condemned to death on 14 January 1840, a sentence later commuted to life imprisonment. Release, revolutions and further imprisonment (1848-1879)[edit] He was released during the revolution of 1848, only to resume his attacks on existing institutions. In 1865, while serving a further term of imprisonment under the Empire, he escaped, and continued his propaganda campaign against the government from abroad, until the general amnesty of 1869 enabled him to return to France. Ideology[edit] Death[edit] Legacy[edit] See also[edit] References[edit]

Pierre-Joseph Proudhon Proudhon, who was born in Besançon, was a printer who taught himself Latin in order to better print books in the language. His best-known assertion is that Property is Theft!, contained in his first major work, What is Property? Or, an Inquiry into the Principle of Right and Government (Qu'est-ce que la propriété? Recherche sur le principe du droit et du gouvernement), published in 1840. The book's publication attracted the attention of the French authorities. Proudhon favored workers' associations or co-operatives, as well as individual worker/peasant possession, over private ownership or the nationalization of land and workplaces. Biography Early life and education Proudhon was born in Besançon, France on February 15, 1809, at 37 Rue du Petit Battant in the suburb of Battant.[6] His father, Claude-François Proudhon who worked as a brewer and a cooper,[7] was originally from the village of Chasnans, near the border with Switzerland. Entrance into the printing trade Early writings Death

Blanquism Louis Auguste Blanqui In left-wing discourse, Blanquism refers to a conception of revolution generally attributed to Louis Auguste Blanqui which holds that socialist revolution should be carried out by a relatively small group of highly organised and secretive conspirators.[1] Having seized power, the revolutionaries would then use the power of the state to introduce socialism. It is considered a particular sort of 'putschism' – that is, the view that political revolution should take the form of a putsch or coup d'état.[2] Blanquism is distinguished from other socialist currents (especially Marxist ones) in various ways; on the one hand, contrary to Marx, Blanqui did not believe in the predominant role of the working class, nor did he believe in popular movements. Instead he believed that revolution should be carried out by a small group of professional, dedicated revolutionaries, who would establish a temporary dictatorship by force. Central Revolutionary Committee[edit] Lenin[edit]

International Workingmen's Association Logo first used by the Federal Council of Spain of the International Workingmen's Association. The International Workingmen's Association (IWA, 1864–1876), often called the First International, was an international organization which aimed at uniting a variety of different left-wing socialist, communist[1] and anarchist political groups and trade union organizations that were based on the working class and class struggle. It was founded in 1864 in a workmen's meeting held in Saint Martin's Hall, London. Its first congress was held in 1866 in Geneva. In Europe, a period of harsh reaction followed the widespread Revolutions of 1848. Origins Following the January Uprising in Poland in 1863 French and British workers started to discuss developing a closer working relationship. St. On September 28, a great international meeting for the reception of the French delegates took place in St. Internal tensions The Geneva Congress, 1866 The Lausanne Congress, 1867 The Brussels Congress, 1868 After 1872

What Is Property? Theory[edit] Proudhon believed that the common conception of property conflated two distinct components which, once identified, demonstrated the difference between property used to further tyranny and property used to protect liberty. He argued that the result of an individual's labor which is currently occupied or used is a legitimate form of property. The proprietor, the robber, the hero, the sovereign — for all these titles are synonymous — imposes his will as law, and suffers neither contradiction nor control; that is, he pretends to be the legislative and the executive power at once . . . Proudhon contrasted the supposed right of property with the rights (which he considered valid) of liberty, equality, and security, saying: "The liberty and security of the rich do not suffer from the liberty and security of the poor; far from that, they mutually strengthen and sustain each other. Influence[edit] See also[edit] References[edit] External links[edit] The text to What Is Property?

Karl Marx Karl Marx[note 1] (/mɑrks/;[4] German pronunciation: [ˈkaɐ̯l ˈmaɐ̯ks]; 5 May 1818 – 14 March 1883) was a German philosopher, economist, sociologist, journalist, and revolutionary socialist. Marx's work in economics laid the basis for much of the current understanding of labour and its relation to capital, and subsequent economic thought.[5][6][7][8] He published numerous books during his lifetime, the most notable being The Communist Manifesto (1848) and Das Kapital (1867–1894). Born into a wealthy middle-class family in Trier in the Prussian Rhineland, Marx studied at the Universities of Bonn and Berlin where he became interested in the philosophical ideas of the Young Hegelians. After his studies he wrote for Rheinische Zeitung, a radical newspaper in Cologne, and began to work out the theory of the materialist conception of history. Early life[edit] Childhood and early education: 1818–1835[edit] Karl Marx was born on 5 May 1818 to Heinrich Marx and Henrietta Pressburg (1788-1863).

The Communist Manifesto The Communist Manifesto (originally Manifesto of the Communist Party) is an 1848 political pamphlet by German philosophers Karl Marx and Friedrich Engels. Commissioned by the Communist League and originally published in London (in the German language as Manifest der kommunistischen Partei) just as the revolutions of 1848 began to erupt, the Manifesto was later recognized as one of the world's most influential political manuscripts. It presents an analytical approach to the class struggle (historical and present) and the problems of capitalism and the capitalist mode of production, rather than a prediction of communism's potential future forms. Synopsis Karl Marx and Friedrich Engels, authors of the Manifesto The Communist Manifesto is divided into a preamble and four sections, the last of these a short conclusion. "Proletarians and Communists", the second section, starts by stating the relationship of conscious communists to the rest of the working class. Writing Publication Rise, 1872–1917

Collectivist anarchism For the collectivization of the means of production, it was originally envisaged that workers will revolt and forcibly collectivize the means of production.[1] Once collectivization takes place, money would be abolished to be replaced with labour notes and workers' salaries would be determined, in democratic organizations of voluntary membership, based on job difficulty and the amount of time they contributed to production. These salaries would be used to purchase goods in a communal market.[2] This contrasts with anarcho-communism where wages would be abolished, and where individuals would take freely from a storehouse of goods "to each according to his need." Thus, Bakunin's "Collectivist Anarchism," notwithstanding the title, is seen as a blend of individualism and collectivism.[3] Collectivist anarchism is most commonly associated with Mikhail Bakunin, the anti-authoritarian sections of the First International, and the early Spanish anarchist movement. The First International[edit]

Statism and Anarchy Statism and Anarchy (Russian: Государственность и анархия, Gosudarstvennost' i anarkhiia) was the last work by the Russian anarchist Mikhail Bakunin. Written in the summer of 1873, the key themes of the work are: the likely impact on Europe of the Franco-Prussian war and the rise of the German Empire, Bakunin's view of the weaknesses of the Marxist position, and an affirmation of anarchism. Statism and Anarchy was the only one of Bakunin's major anarchist works to be written in Russian, and was primarily aimed at a Russian audience, with an initial print run of 1,200 copies printed in Switzerland and smuggled into Russia.[1] Marshall Shatz writes that Statism and Anarchy: 'helped to lay the foundations of a Russian anarchist movement as a separate current within the revolutionary stream. Jump up ^ Shatz, M.

History of the Second International Formation of the International October 1881 (Chur) Founding Conference of the Second International. “The Belgian socialists, the French Parti Ouvrier, the German social democracy, and the Swiss social democracy, participated in the preparations for the congress. But whereas at Ghent the anarchists had also participated, they had nothing to do with the Chur Congress, but ... called a congress of their own in London.” Delegates included: Wilhelm Liebknecht (Germany); McGuire, General Secretary of the United Brotherhood of Carpenters (Socialist Labor Party of North America); Louis Bertrand (The Belgian Socialist Party); J. Joffrin and Benoît Malon (The French Parti Ouvrier); J. The Conference did not succeed in bringing the parties into a new International, but called for the drafting of a joint socialist manifesto to be submitted to the next international congress, to be organised by the Parti Ouvrier in Paris in 1886. International Socialist Congresses 2. 1891 (Brussels) 5. 7. 8.