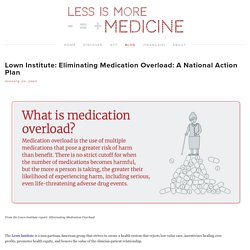 They have brought together like-thinkers to create the Right Care Alliance, host a conference on the theme of over treatment, contributed to the landmark Lancet 2017 series on overdiagnosis/overtreatment, and have now worked with partners to develop a National Action Plan on Eliminating Medication Overload. I work with one of the endorsing organizations, the Therapeutics Initiative, a group at the University of British Columbia that offers non-conflicted critical appraisal of evidence and knowledge translation. Much of our work focusses on polypharmacy, deprescribing, and finding ways to teach and empower clinicians to do this work (like feeding-back prescribing data in individual Prescriber Portraits). Which do you think is the most important? Untitled. Your family doctor can provide you with comprehensive, patient-centred health care, focusing on your wellness and improved quality of life, and any acute physical or mental health concerns. 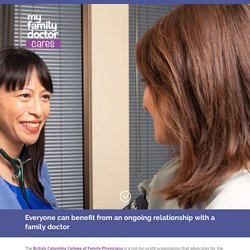 Family doctors use the best available evidence and their clinical expertise to create care plans that fit their patients’ needs. They also recognize how social factors like family history, financial status, responsibilities, cultural background and past traumas impact health. Family doctors may work on their own, as part of a group practice or as part of a multidisciplinary team with other health care providers. They care for patients in the doctor’s office, the hospital, other health care facilities and the patient’s home. FINAL BCCFP CampaignOnePager 04. Why Is it so Hard to Find a Doctor in Vancouver? - Vancouver Magazine. Vancouver-based publicist Carine Redmond suffered a stress fracture in her foot in November 2018, an injury that impacted her day-to-day life to such a degree that, before it was diagnosed, she was offered the use of a wheelchair at Palm Springs International Airport when visiting that city one weekend. 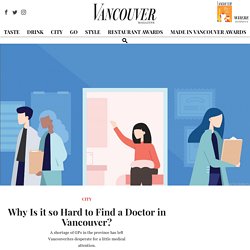 Physicians in canada 2018. Doctor-supply-cihi-1. The number of doctors in Canada is growing at a rate more than double that of the population, says a report by the Canadian Institute of Health Information. 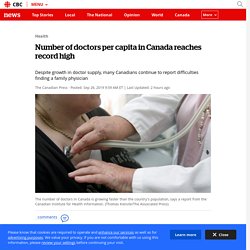 Canada's population increased by 4.6 per cent between 2014 and 2018, while the number of physicians grew by 12.5 per cent over the same time period, says the report released Thursday. In 2018, there were almost 90,000 physicians in the country. That's the equivalent to 241 physicians per 100,000 population — the highest number per capita ever, the institute said.

Manitoba and British Columbia registered the largest increases in doctors at more than 17 per cent each while Quebec had the lowest level of physician growth at 5.9 per cent, just below the 6.5 per cent growth in Nova Scotia. While the supply of doctors has grown faster than the population over the past dozen years, many Canadians continue to report difficulties finding a family physician, said Geoff Ballinger, the institute's physician information manager. The Fraser Northwest Nurse Debbie initiative: Bringing primary care to patients’ homes. In 2015, family doctors with the Fraser Northwest Division of Family Practice identified a need for more support and services for frail elderly patients, many of whom were presenting in the emergency room with issues that could have been managed at home. 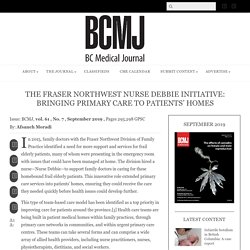 The division hired a nurse—Nurse Debbie—to support family doctors in caring for these homebound frail elderly patients. This innovative role extended primary care services into patients’ homes, ensuring they could receive the care they needed quickly before health issues could develop further. Critical Condition Part 1: How the family doctor crisis is impacting Island families. Why can't you find a doctor? Until recently, Barbara Pedrick never had to worry about finding a doctor. 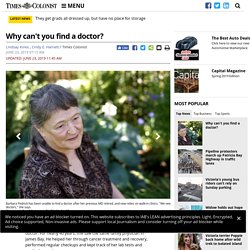 For nearly 40 years, she saw the same family physician in James Bay. He helped her through cancer treatment and recovery, performed regular checkups and kept track of her lab tests and medical records. “He delayed retiring for I don’t know how many years, because he couldn’t find somebody to replace him,” Pedrick said. Eventually, though, he had to quit, and Pedrick has been unable to find a permanent replacement. 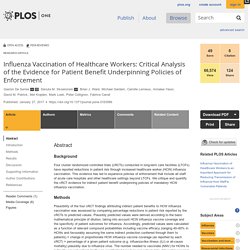 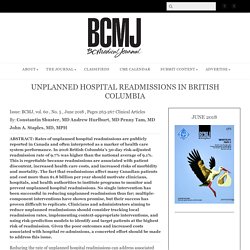 Hospital readmission rates are calculated by determining the proportion of discharged patients who are readmitted within a designated time frame. None declared. This article has been peer reviewed. Changes to health care system continue with addition of clinical pharmacists. LISTEN: What will primary care clinics mean for B.C. health care workers? CBC.ca. When Dr. 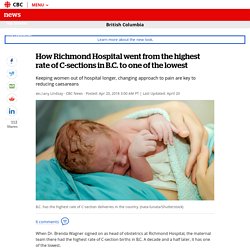 Brenda Wagner signed on as head of obstetrics at Richmond Hospital, the maternal team there had the highest rate of C-section births in B.C. A decade and a half later, it has one of the lowest. There's no simple answer for how Wagner and her colleagues turned things around, but she said changing the culture of the maternity unit was key.

"There is a huge art to managing labour, and I think to some extent, we've lost some of it," Wagner told CBC News. Numbers released this week show B.C. leads the country in delivery by caesarean. Richmond's rate, on the other hand, was much closer to those in the rest of the country, coming in at 30 per cent. Wagner, who sits on the steering committee for Perinatal Services B.C., said the single biggest factor in whether a woman will have a C-section is the location where she gives birth. Seniors’ homes made from shipping containers. Recycled shipping containers will be used to build a new 48-unit long-term care facility for seniors with dementia in Hythe. 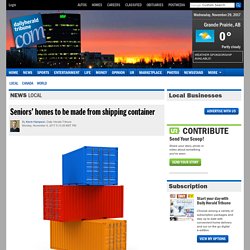 The estimated $12 million project is an initiative of Hythe Pioneer Homes a non-profit that provides housing for seniors and the disabled) in partnership with Points West Living/Connecting Care. The project, expected to be completed in the spring of 2018, is funded by Alberta Health through the Affordable Supportive Living Initiative grant as well as Alberta Treasury Branch financing. The building is being constructed by Calgary’s Ladacor Advanced Modular Systems. Number of B.C. doctors growing but work-life balance means fewer patient visits, worsening access. Primary care physicians trying to achieve the Holy Grail — work/life balance — are exacerbating patient access problems because they’re working less than previous generations of such doctors, a new University of B.C. study shows. The authors warn that if the supply of primary care doctors (also called family doctors or general practitioners) doesn’t grow substantially, “ever-shrinking practices will result in an increasing number of people who have difficulty finding a regular source of primary care.”

The Canadian Community Health Survey showed over 16 per cent of B.C. residents don’t have a regular primary care doctor. And practice sizes in B.C. — the number of patients per primary care doctor — are the second lowest in Canada, says Laura Heinze, spokeswoman for the B.C. Ministry of Health. In British Columbia, The Supply Of Primary Care Physicians Grew, But Their Rate Of Clinical Activity Declined. 'The solution is really system wide': Long wait times defy quick fixes. About a decade ago, it seemed obvious that Canada was going to need a lot more orthopedic surgeons to replace more hips, knees and other joints, in part due to our aging population. To prepare to meet that need, the number of residency spots for the specialty was increased, so more surgeons could be trained.

Unfortunately, it did not work out as planned. Around the same time, the 2008 recession marked the beginning of constrained health care budgets that continue to this day – and cuts to operating room time, money for new joints, nursing services and rehabilitation care all followed. Team-based care in Northern BC: North Peace Division’s journey to an integrated model of care. Issue: BCMJ, Vol. 59, No. 4, May 2017, page(s) 228-229 GPSCSusan Papadionissiou Team-based care is a core attribute of the patient medical home model,[1] and a key foundational piece in building an integrated system of primary and community care. A comprehensive team-based care approach enables providers to work together more effectively to create a clear path to care and provide efficient services to vulnerable and high-needs patients.

This approach also benefits physicians by helping them achieve a better work-life balance and by ensuring that responsibility for supporting patients with complex needs does not rest solely on the physician’s shoulders.[1] Much of the work toward developing a team-based care approach that can be broadly implemented by practices around the province is based on projects and initiatives currently being led by divisions of family practice. Diagnoses and imaging utilization for common shoulder disorders by referring physicians in British Columbia. Background: Determining an accurate diagnosis for shoulder pain can be challenging. Because advanced imaging studies ordered by referring physicians may be unnecessary or have a negative impact on patient care, we sought to determine whether the assessment and imaging protocols used in the primary care setting enhance diagnostic accuracy or serve only to increase both costs and referral wait times. Methods: We conducted a retrospective, observational cohort study utilizing a patient chart review to compare the diagnoses of referring physicians with the diagnoses of an orthopaedic specialist.

The study included all patients referred to the practice of a single shoulder surgeon between January 2011 and May 2015. Patients were identified through an electronic medical record system (Plexia) using International Classification of Diseases codes for four common shoulder pathologies: rotator cuff tear, glenohumeral osteoarthritis, instability, and adhesive capsulitis. Nanaimo seniors rally against elder care treatment. NANAIMO — After watching their spouses wither in a residential care home in Nanaimo, two local seniors are speaking out about their concerns. Geir Larsen's wife Jeannie was admitted to Dufferin Place, run by Island Health, in October 2014 and she passed away in care on July 28, 2016.

The genius of frugal innovation. iStock If an optimist sees the opportunity in every difficulty, then the developing world must be filled with optimists. There, people have learned to get more value from limited resources and find creative ways to reuse what they already have. The origins of publicly funded medical care in BC and the BCMA’s contributions. The 50th anniversary of the BC Medical Plan, the first government-funded medical care program in British Columbia, was recognized on 1 September 2015. “Deplorable” for government to spend less on home support while number of seniors needing it rises, critic says. Cover up: The lack of evidence for vaccinate or mask policies. The biggest source of waste in Canadian health care? The private, for-profit sector : Policy Note. Nov 21, 2016 By Alex Hemingway Brian Day’s legal battle against universal public health care in Canada is now before the BC Supreme Court.

The CareMore Model. BC physicians reduce unnecessary antibiotic use—and costs. It is rare to find a health intervention that both improves a standard of practice and reduces costs, but this seems to be the case for the Do Bugs Need Drugs? Program in BC. The World Health Organization and the Public Health Agency of Canada recognize the rapid emergence of antibiotic-resistant organisms as being among the most significant threats to health and health care–system sustainability.

Wise use and stewardship of antibiotics are essential in mitigating the threat by reducing the pressure for natural selection of resistant organisms and preserving the value of antibiotics for future generations. Between 80% and 90% of antibiotics used in human populations are prescribed in the community. In 2005 the BC Ministry of Health funded Do Bugs Need Drugs? Waiting too long for an MRI or CT scan? Don’t blame doctors for ordering too many: BCMJ. CMAJ Mobile. British Columbia’s doctors incentive program fails patients: research. Incentive-Based Primary Care: Cost and Utilization Analysis.