..as well as coverage of the many faceted fight to keep it alive

Our wonderful new Healthcare Bill is now out for review and negotiation. ObamaCare is a complete and total disaster - is imploding fast! CBO_americanhealthcareact_1. The Shocking Verdict on Trumpcare - Rolling Stone. Donald Trump promised in January that his Obamacare replacement would create "insurance for everybody. 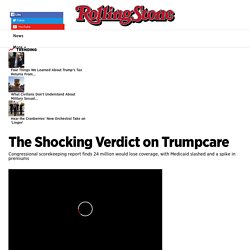 " On the campaign trail, Trump claimed that "Republicans who want to cut Medicaid ... are wrong" and promised there would be "no cuts. " But Trumpcare – the House legislation the president has claimed as "our wonderful new Healthcare Bill" – will kick tens of millions of Americans off the insurance rolls and slash Medicaid by nearly $900 billion.

That's the verdict of the Congressional Budget Office, the nonpartisan scorekeeper charged with forecasting the impact of new legislation. Trumpcare not only covers fewer people, but will also drive up premiums – at least in the short term. According to the CBO, Trumpcare will drive a spike in insurance costs of 15 to 20 percent for those who remain in the individual market.

Hands Off my Healthcare​

Report: Unclear Whether Opposition From Every Sector Of American Society Will Have Any Effect On Healthcare Bill Passing. WASHINGTON—As a growing number of interest groups, politicians, and media outlets continue to voice criticism of the proposed American Health Care Act, a report published Tuesday by the Pew Research Center found it was totally unclear if opposition to the bill from every last sector of American society would have any effect on whether or not it passes. 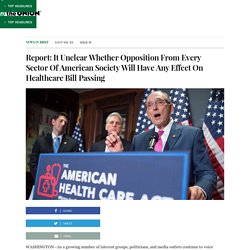 “Although the AHCA has been condemned from persons all along the political spectrum, not to mention literally everyone else with an informed opinion, it’s still uncertain if any of that will have any bearing on whether the bill is signed into law,” read the report in part, adding that there was no way to tell whether widespread resistance to the bill from healthcare providers, Democrats, and both moderate and conservative Republicans would diminish in the slightest its ability to secure a majority of votes in Congress. Why Trump Will Have a Hard Time Undoing Barack Obama's Policies. Vice President Joe Biden put it best: “This is a big fucking deal.” 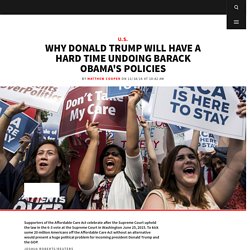 His blunt appraisal was picked up by a microphone at the 2010 ceremony where President Barack Obama signed the Affordable Care Act, or ACA. The law was the biggest step toward national health insurance in the United States since the enactment of Medicare in 1965, and Obama signed it with 22 pens, most of them distributed as souvenirs to beaming Democratic members of Congress who stood nearby applauding.

The ACA and many of the biggest achievements of Obama’s eight years in office are now at risk. Donald Trump, the president-elect, has repeatedly vowed to “repeal and replace” Obamacare and napalm the Democrat’s policies on immigration, the environment and Iran, among other things. With Republicans now controlling Congress, Trump is in a good position to get most of what he wants. Try Newsweek for only $1.25 per week. GOP: Protests won't alter ObamaCare repeal plans.

Top Medicaid doctor breaks from his Trump-appointed boss and comes out against Republican plan. Dr. 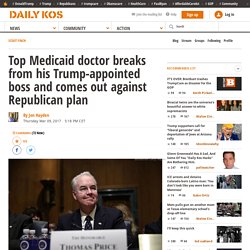 Andrey Ostrovsky is one of the leading physicians in the country. He is currently serving as the Chief Medical Officer for The US Center for Medicaid and CHIP Services (CMCS). Last night he broke from Tom Price, Trump’s Health and Human Services Secretary, to state his opposition to the Republican’s faulty ACA replacement: Andy Slavitt, the former Acting Administrator of the Centers for Medicare and Medicaid Services (CMS) later took to Twitter to call Ostrovsky a hero for taking this stance: How long until Ostrovsky is relieved of duty for telling the truth? 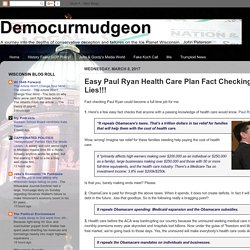 Here's a few easy fact checks that anyone with a passing knowledge of health care would know. Paul Ryan says.. “It repeals Obamacare's taxes. Wow, wrong! It "primarily affects high earners making over $200,000 as an individual or $250,000 as a family), large businesses making over $250,000 and those with 50 or more full-time equivalents, and the health care industry.