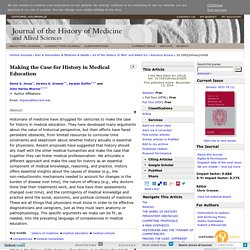 They have developed many arguments about the value of historical perspective, but their efforts have faced persistent obstacles, from limited resources to curricular time constraints and skepticism about whether history actually is essential for physicians. Recent proposals have suggested that history should ally itself with the other medical humanities and make the case that together they can foster medical professionalism. What is the future of the history of medicine at medical schools? Joseph M. Gabriel, “Medical Monopoly: Intellectual Property Rights and the Origins of the Modern Pharmaceutical Industry” (U Chicago Press, 2013)

David Wright, “Downs: The History of a Disability” (Oxford UP, 2011) Kara W. Swanson, “Banking on the Body: The Market in Blood, Milk, and Sperm in Modern America” (Harvard UP, 2014) Yesterday’s drugs are tomorrow’s medicines – Benjamin Breen. My sister is a witch. 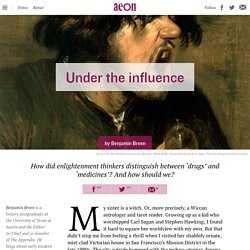 Or, more precisely, a Wiccan astrologer and tarot reader. Growing up as a kid who worshipped Carl Sagan and Stephen Hawking, I found it hard to square her worldview with my own. But that didn’t stop me from feeling a thrill when I visited her shabbily ornate, mist-clad Victorian house in San Francisco’s Mission District in the late 1990s. First Blood Transfusion: A History. The world’s first experiments with blood transfusion occurred in the mid-1660s in England. 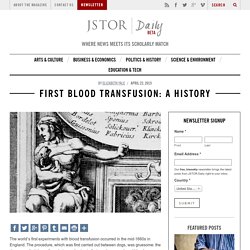 The procedure, which was first carried out between dogs, was gruesome: the dogs were tied down, the arteries and veins in their necks opened, and blood transferred from one to another through quills (most likely made from goose feathers) inserted into the blood vessels. The experimentalist started and stopped the flow of blood by loosening and tightening threads tied with running knots around the dogs’ blood vessels.

The blood of the “emittent” dog flowed from its carotid artery into a vein in the recipient’s neck while the recipient’s own blood ran out its carotid artery. According to physician Richard Lower, who described the operation in an essay published in 1666 in Philosophical Transactions, the world’s oldest scientific journal, the transfusion came to an end when the emittent dog began “to cry, and faint, and fall into Convulsions, and at last dye [sic].” Medicine and Mistrust by Zach Maher. “The world of my parents, and that of their children, dramatically improved in the latter half of the twentieth century as modern medicine introduced an array of effective vaccines and antibiotics,” writes Jerome Groopman, reviewing On Immunity by Eula Biss in the March 5, 2015, issue of The New York Review of Books. 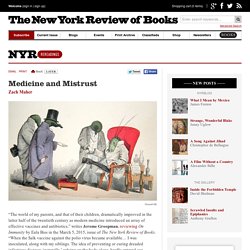 “When the Salk vaccine against the polio virus became available… I was inoculated, along with my siblings. The idea of preventing or curing dreaded infectious diseases ‘naturally,’ relying on the body alone, hardly entered our minds.” Eula Biss is one of many parents for whom the decision to inoculate a child, in 2015, is not so simple. There’s No Way Out of It! by Jerome Groopman. On Immunity: An Inoculation by Eula Biss Graywolf, 205 pp., $24.00 Bad Faith: When Religious Belief Undermines Modern Medicine by Paul A. 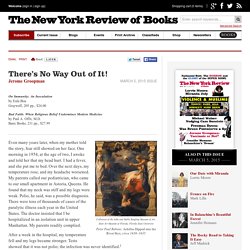 Offit, M.D. Five historical figures who dared to be pro-vaccine before their time. With more than 100 confirmed cases of measles in the United States so far this year, many of which have been linked to the Disneyland outbreak in December, the importance of vaccines can't be understated. 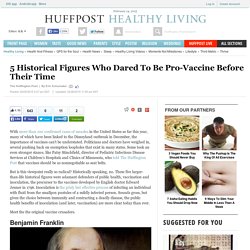 Do Infections Make You Dumber? - Pacific Standard. Getting sick sucks. 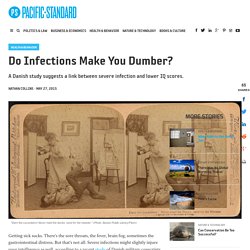 Under A Spell. Call of Duty. What is it to feel a calling for anything? 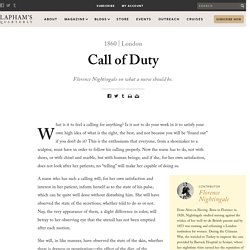 Is it not to do your work in it to satisfy your own high idea of what is the right, the best, and not because you will be “found out” if you don’t do it? This is the enthusiasm that everyone, from a shoemaker to a sculptor, must have in order to follow his calling properly. Now the nurse has to do, not with shoes, or with chisel and marble, but with human beings; and if she, for her own satisfaction, does not look after her patients, no “telling” will make her capable of doing so.

From Notes on Nursing. Born in Florence in 1820, Nightingale studied nursing against the wishes of her well-to-do British parents and by 1853 was running and reforming a London institution for women. Six Ways the Civil War Changed American Medicine. In 1862, U.S. 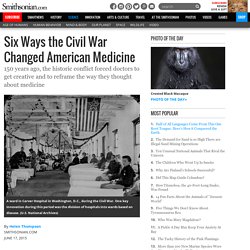 Surgeon General William Hammond put out a call to medical field officers in the Union Army: Send any specimens of morbid anatomy that might be valuable to military medicine and surgery. It might seem like a strange request, but the medical profession was in the midst of change—from a system based on tradition to one based on evidence. The Frightening Legacy of Typhoid Mary. Alternative Medicines. When Amy Huffman and Karl Milhon entered the clinic, they knew they were doing so under false pretenses. 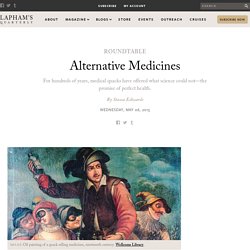 Milhon told the doctor, Hulda Regehr Clark, that he was a bisexual man whose former partner had recently been diagnosed with HIV—essentially, a death sentence in 1993. Huffman was there as his friend, to hold his hand and offer support as he received his diagnosis. Milhon signed a form stating that he understood Clark was a naturopath, a practitioner of alternative medicine who used “vitamins, minerals, and herbs to change amino acids in the body,” as well as “orthomolecular nutritional therapy.” The pair was then seen by Clark, who used the prefix doctor even though she was not a licensed physician. An Italian cemetery may provide clues on cholera’s evolution.

Undergraduate students examine the skeleton of a young male excavated from the Badia Pozzeveri cemetery A team of archaeologists and other researchers hope that an ancient graveyard in Italy can yield clues about the deadly bacterium that causes cholera. The researchers are excavating the graveyard surrounding the abandoned Badia Pozzeveri church in the Tuscany region of Italy. The site contains victims of the cholera epidemic that swept the world in the 1850s, said Clark Spencer Larsen, professor of anthropology at The Ohio State University and one of the leaders of the excavation team.

Archaeologists and their students have spent the past four summers painstakingly excavating remains in a special section of the cemetery used for cholera victims. What McDonald's Is Really Doing by Banning Antibiotics in Poultry. Last week, fast-food giant McDonald's announced a commitment to stop serving chicken raised with "human" antibiotics in its American restaurants. The chain was widely lauded for a decision that followed in the footsteps of chicken purveyors Perdue and other restaurant chains like Chick-fil-A and Chipotle.

As one of the nation's largest purchasers of poultry, McDonald's switch will have a dramatic effect on the U.S. poultry industry: The chain gave suppliers like Tyson Foods, Inc. two years to accomplish a shift that took Perdue more than decade — and several million dollars — to implement. Other food corporations will almost certainly continue this trend (Costco Wholesale, which sells millions of rotisserie chickens in its stores, followed suit mere days later). Antibiotics have been used in farm animals for decades, but not only to treat infections or prevent the spread of disease. In 2012, almost 97 percent of agricultural antibiotics were sold without a veterinary prescription. Lead Poisoning: The Ignored Scandal by Helen Epstein. Lead Wars: The Politics of Science and the Fate of America’s Children by Gerald Markowitz and David Rosner University of California Press/ Milbank Memorial Fund, 298 pp., $34.95 (to be published in April) In December 1993, a slum landlord in Baltimore named Lawrence Polakoff rented an apartment to a twenty-one-year-old single mother and her three-year-old son, Max.1 A few days after they moved in, Max’s mother was invited to participate in a research study comparing how well different home renovation methods protected children from lead poisoning, which is still a major problem endangering the health of millions of American children, many of them poor.

Exploring the Causes of Black Women’s Obesity. The Heroin Heroine of Reddit — Backchannel. Sierra Leone is free of Ebola, 18 months and 11,000 deaths after outbreak. Remembering Ryan White, 25 years after his death. Elizabeth Taylor Reportedly Ran an AIDS Pharmaceuticals Ring from Her Bel Air Mansion. How Our Days Became Numbered: Risk and the Rise of the Statistical Individual, Bouk. How mathematics can make epidemics history – Adam Kucharski. List of Rare Diseases. Hillel D. Braude, "Intuition in Medicine: A Philosophical Defense of Clinical Reasoning" (U Chicago Press, 2012) Beatrix Hoffman, "Health Care for Some: Rights and Rationing in the United States since 1930" (U of Chicago, 2012)

Obamacare and Reagan. Zombies against Medicare. Health: The Right Diagnosis and the Wrong Treatment by Marcia Angell. Treating vs. Healing: Understanding What Wellness Means to Patients - Pacific Standard. Joanna Kempner, "Not Tonight: Migraine and the Politics of Gender and Health" (U of Chicago Press, 2014) Take A Valium, Lose Your Kid, Go To Jail. 'Dry Eye' Has Ruined People's Lives — And Stumped The Medical Community. Stanford Medicine Magazine. How We Are Sick: Diagnosis. How risk factors drive medical overtreatment – Jeff Wheelwright. Seth Mnookin: Fighting a One-of-a-Kind Disease. The Deadly Mystery Behind Kawasaki Disease. The butterfly effect. When to Sign Polio's Death Certificate. 60 years in an iron lung: US polio survivor worries about new global threat. The Last Few Polio Survivors – Last of the Iron Lungs. Polio survivors from Parkland reunite six decades later.

This Doctor Knows Exactly How You Feel - Pacific Standard. Things you wish primary care doctors would know. Dealing With Doctors: Taking Control of Your Health Care Destiny. When Patients Read What Their Doctors Write. Some doctors still use leeches. This is what it's like to be treated by one. Why doctors should treat the healthy too. Experts call for more understanding of hospital weekend death risk.

More diversity needed in medical school textbooks. W. Eugene Smith’s Landmark Portrait: ‘Country Doctor’ The Enormous Scope of Our National Drinking Problem - Pacific Standard. Greatist - When Your Body Is Dehydrated. 9 questions about urine you were too embarrassed to ask. Storytelling program helps change medical students' perspectives on dementia. A Galveston Med Student Describes Life and Death in the "Safety Net" A. Mark Smith, "From Sight to Light: The Passage from Ancient to Modern Optics" (U of Chicago Press, 2015)