Still the one: Cake-Pan Cake takes the cake. It was 20 years ago this month I moved from Maine to New Hampshire, found a job at King Arthur Flour across the river in Vermont… and discovered the best company in the world. 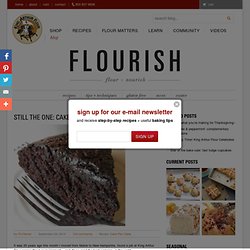 Frank and Brinna Sands owned King Arthur Flour back in 1990, when I arrived. Frank’s family had been involved with the business since the early 1800s; generations of Sands men had sold King Arthur Flour, headed the company as president or, from 1932 to 1996, owned it outright. In 1996, without a next generation of Sands family to take over, Frank and Brinna sold the company to the employees. King Arthur is now 100% employee-owned. Over the years, King Arthur has transitioned from a small New England business to one of the nation’s top flour companies. It’s a great legacy, and one we’re very proud of. Vertical Layer Cake Tutorial - i am baker - StumbleUpon. I really need to preface this tutorial with... 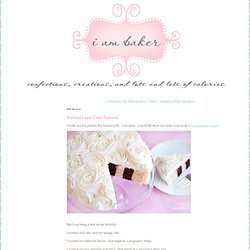 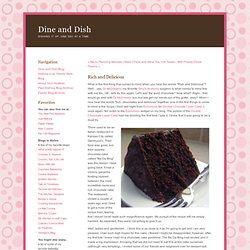 Well... yes, Dr McDreamy, my favorite Grey's Anatomy surgeon is what comes to mind first with me too. OK...let's try this again. Let's add the word chocolate? Now what? Right... that would go well with Dr McDreamy too, but lets get our minds out of the gutter, okay? There used to be an Italian restaurant in Kansas City called Gambucci's. Well, ladies and gentlemen... So, next time you are thinking about rich and delicious, think about the usual... From Epicurious.com: Peanut Butter Cup Chocolate Cake Cheesecake. Last week I got an email from a kind reader asking if I would consider developing a recipe for one of her favorite "factory-made" desserts. 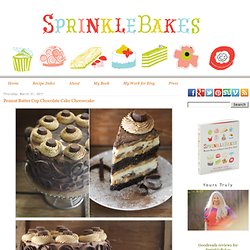 The minute I clicked the link she provided, I knew I wanted to make her cheesecake dreams come true. I had concerns about how this cake would translate to real world baking. No doubt it is mass-produced with industrial equipment since it is sold nationwide at a popular restaurant chain. I knew I would have to simplify each of the recipe's elements and keep the baking equipment simple. With its many layers, the recipe I came up with is time consuming, but it will not be difficult for the home baker to execute. One other thing. Of course, the chocolate curls are optional, but just in case you want to make them I'm including a how-to video for them in this post.

Below are many of the steps illustrated in pictures. The recipe has notes that correspond with the numbered pictures. Chocolate Quake Cake. Maybe this blog should be renamed "Sprinkle Bakes Chocolate Cakes". 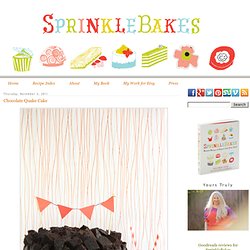 Mint Chocolate Chip Cake. Pastry Affair - Home - Chocolate Fudge Cake with Ghost Meringues. When the house on the corner of my street pulls out the pumpkins, inflatable Frankenstein, huge tree-covering spiderwebs, and plastic black cats, I know that Halloween is on its way. 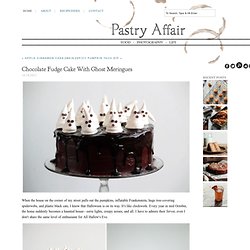 It's like clockwork. Every year in mid October, the home suddenly becomes a haunted house—eerie lights, creepy noises, and all. I have to admire their fervor, even I don't share the same level of enthusiasm for All Hallow's Eve. Trick or Treating was easily my favorite part of Halloween (and it's a shame I'm about ten years too old for it). I didn't care for dressing up or even the candy (gasp), it was the simple act of going from house to house that kept me coming back. My younger sister and I always fought over who got to ring the doorbell. At the end of the evening, my family would gather in the living room, the candy buckets would be overturned, and we'd all ooh and ahh over our loot. Pastry Affair - Home - Devil's Food Cake. There is something to be said about a simple chocolate cake. 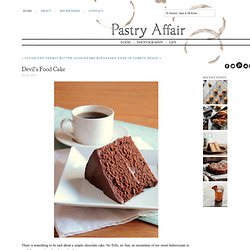 No frills, no fuss, no mountains of too sweet buttercream to spoil the treat—just chocolate and cake. Moist Chocolate Cake. There’s something to be said for a cake that you can whip up at 9 o’clock on a Friday night, after a serious doozy of a week, when you need some baking therapy that requires little to no brain power. 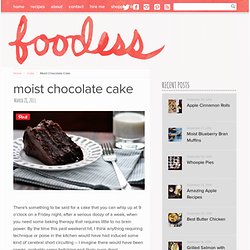 By the time this past weekend hit, I think anything requiring technique or poise in the kitchen would have had induced some kind of cerebral short circuiting – I imagine there would have been sparks, probably some twitching and likely even drool. Okay fine, so there might have been drool anyway. Actually, when the cake emerged, there was probably drooling and clapping. I tell you that because I trust you won’t judge me. This cocoa-based cake is deeply chocolaty and incredibly moist. Fourteen for the Fourteenth. Fourteen Layer Cake. 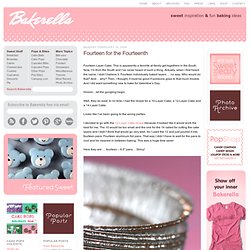 This is apparently a favorite at family get togethers in the South. Now, I’m from the South and I’ve never heard of such a thing.