The Best LGBTQ+ Instagrammers To Follow On Instagram. Cjzusfwz60efmatqr5w4b6lgd oatly sustainability report web 2018 eng. Subscribe to read. The game-changing fashion label reinventing multipurpose wear. Introducing circular fashion: the shopping concept that could save the planet. Sustainability has never been important to shoppers, nor to the fashion industry. 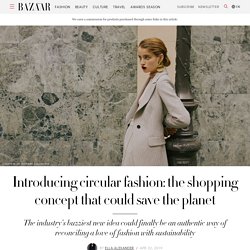 An A–Z list of ethical clothing brands based in Europe. Community Building And The Gen-Z Purchasing Path. Brook Cagle on Unsplash Growing up with the internet in a mobile-era, Gen-Z is unlike any demographic cohort preceding it. 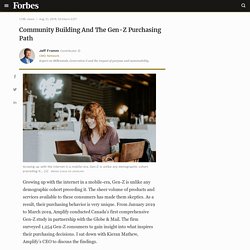 The sheer volume of products and services available to these consumers has made them skeptics. As a result, their purchasing behavior is very unique. 22 Best Sustainable Clothing Brands, from Streetwear to Underwear. Customer Of The Future: 5 Ways To Create A Customer Experience For Gen-Z. Millennials may have turned the retail space on its head and transformed numerous industries, but the changes are just beginning. 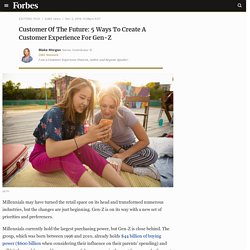 Gen-Z is on its way with a new set of priorities and preferences. Millennials currently hold the largest purchasing power, but Gen-Z is close behind. The group, which was born between 1996 and 2010, already holds $44 billion of buying power ($600 billion when considering their influence on their parents’ spending) and will hit the workforce and become powerful consumers in the next few years. 'Zine culture' predicted to drive creativity in 2019. What do leopard print, kawaii and icing letters have in common? 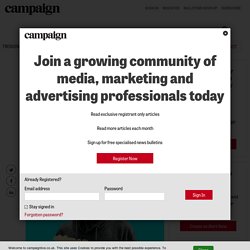 According to Shutterstock’s 2019 Creative Trends Report, they have all seen significant uplift in image searches year on year. The annual report highlighted the rise of "zine culture" as the core mainstream trend for creatives. There was a 1,376% year-on-year increase in search for contemporary art collage images as the raw, homemade aesthetic got a digital update. Best Women's Streetwear & Sneaker Stores in the UK. Shopping for streetwear has become a lot more seamless in recent years, with the category’s rise in popularity and its crossover into the luxury sphere. 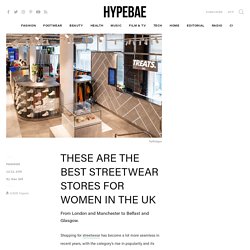 Despite this, it can still be hard to find stores that have a strong selection of the goods in women’s sizes. Most shops focus heavily on menswear, either stocking only men’s brands or products in larger sizes so we’ve rounded up some of the best places in the UK where you can actually cop streetwear that fits. Between luxury department stores like Selfridges, sneaker-heavy shops like END. and specialized boutiques like MACHINE-A, we’ve got you covered everywhere from Glasgow and Belfast to London.

Scroll below for the full list, and remember you can also shop most of these stores online so you won’t miss out whatever your home city. Gen Z: New Gender Norms, Fake News, Frugality And The Rise Of Retail's Next Power Generation. One constant for leaders in the retail industry is that one can never get too comfortable. 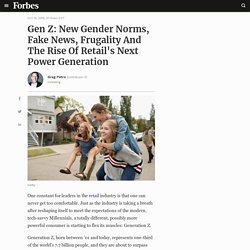 Just as the industry is taking a breath after reshaping itself to meet the expectations of the modern, tech-savvy Millennials, a totally different, possibly more powerful consumer is starting to flex its muscles: Generation Z. Generation Z, born between ’01 and today, represents one-third of the world’s 7.7 billion people, and they are about to surpass Millennials, according to a Bloomberg analysis. It’s likely that many retailers think if they can tackle Millennials, how different can Generation Z really be? Very different. Converse to Introduce Genderless Collection for Fall. NEW YORK — Converse is embracing the movement toward nonbinary fashion by introducing a genderless apparel collection for the first time. 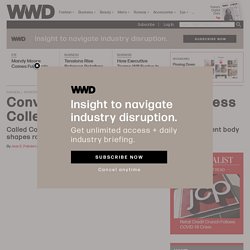 Called Converse Shapes, the line of sportswear — T-shirts, hoodies, sweatshirts and chinos — was designed for different body shapes rather than genders. The initial launch, which is slated for fall, encompasses five pieces in four sizes with detailing such as gussets, pleats and elastic waistbands that can expand and collapse to fit a wide variety of consumers. Apparel designed for men and women generally offer 14 sizes, seven for each gender. In a presentation here Tuesday morning, the Boston-based brand unveiled Converse Shapes along with several other innovations it will introduce in 2020 and beyond.

For true sneakerheads, every shoe tells a story. Ever since trainers evolved from being purely functional to a fixture of mainstream fashion, no other item of clothing has played a bigger role in the history of youth culture. 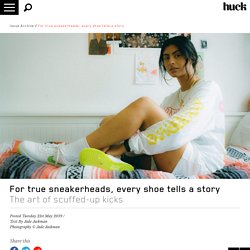 In the mid-1980s, after Nike launched its Air Jordan line and Adidas signed an endorsement deal with Run–DMC (the first of its kind), the art of collecting kicks quickly became a subculture of its own. There would be legendary rarities and deadstock, custom alterations and secret cleaning techniques, shrewd swaps and out-of-control auctions. It’s an addiction that has spread through all classes and ethnicities, signifying meaning in everything from social status to gender politics. But true sneakerheads don’t believe in keeping their stash stored away in immaculate condition. 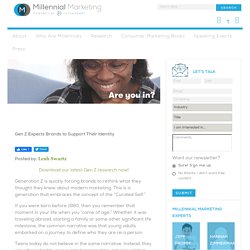 Generation Z is quickly forcing brands to rethink what they thought they knew about modern marketing. This is a generation that embraces the concept of the “Curated Self.” If you were born before 1980, then you remember that moment in your life when you “came of age.” Whether it was traveling abroad, starting a family or some other significant life milestone, the common narrative was that young adults embarked on a journey to define who they are as a person. 12 Gender Neutral Fashion Brands to Know and Love. With fashion being one of the most fun, creative forms of self-expression, it seems rather antiquated to us that many brands categorise their clothes into two genders, when in reality, there is much more to gender than simply male and female. 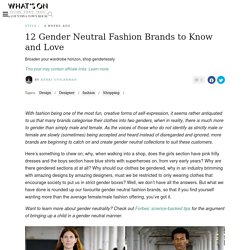 As the voices of those who do not identify as strictly male or female are slowly (sometimes) being accepted and heard instead of disregarded and ignored, more brands are beginning to catch on and create gender neutral collections to suit these customers. The Key To Gen Z Is Video Content. If you’re anything like me, you’ll do just about anything to avoid watching a video and skip to the text instead. Then again, if you’re anything like me, you’re clearly not part of the Gen Z crowd making video content more popular than ever. Generational differences in social media use We’ve long been told that as far as social media is concerned, Facebook is now the realm of “old people.” Perhaps fed up with watching people rant about their personal politics, Millennials and Gen Z have moved on to platforms like Instagram, Snapchat, and YouTube.

Women of Color Host StreetHearts Panel. “If I buy your clothes, why aren’t you including women who look like me in your campaigns? ,” says panelist M’heri Jackson, co-creator of Brown Sugar Collective and brand ambassador for Staple Pigeon. Inclusivity and proper representation were a few of the major themes that were touched on during this past weekend’s StreetHearts panel discussion, hosted by THEAFROBLEUS magazine. “’StreetHearts’ is fostering a necessary conversation about the representation of women of color in streetwear culture,” says THEAFROBLEUS’ editor-in-chief Asia Riddick.

Moderator Ashley Haines, corporate communications manager at Footlocker and former HYPEBAE editor, dove deep on a number of challenges women of color in streetwear face, such as inequality, cultural appropriation and more. Adidas to Launch Sustainable Take-Back Scheme in UK. Adidas is rolling out a new sustainable initiative that works with the London-based start-up Stuffstr to reward customers with vouchers in exchange for old clothes.

The sportswear giant aims to address the growing waste generated by the fashion industry, and is doing so by offering this program to those signed up to its loyalty program in the UK. The online take-back scheme will allow customers to give back any clothing they have purchased from the Three Stripes in the last five years, regardless of its condition. Stuffstr will then take the necessary steps to either repair the clothing where needed, resell it if possible, or break it down to its original form to be reused in brand-new products. Nicce finds a niche. In recent seasons, young fashion trends in the menswear market have been dominated by streetwear influences. Nike News - Apparel Archive. Fashion’s growing interest in recycling clothing.

ANGELS HAVE NO GENDER BUT LOTS OF SEX tank top – OFFICIAL REBRAND. White Rib Asymmetrical Tank – shop.telfar. Woodward questioning p6to40. Kialo - Thoughtful Debate. RAD HOURANI — ESHOP. Full Fashion Business Plan Example for Free. This is an example business plan for a start-up clothes business selling a collection of self-designed bags and will expand the product portfolio to apparel for female motorcyclists – the goal is to establish itself as a well-known brand for motorcycle clothing for fashion-conscious women by combining functionality (protection) and style. The founder is an experienced motorcyclist herself and understands the particular needs of female fellow motorcyclists. What fashion needs to understand about being gender neutral. Over the course of the last year, conversations surrounding gender expression have gained considerable momentum, as the line between the traditional male and female binaries grow increasingly blurred and the cultural landscape begins to shift.

These conversations haven't been lost on the fashion industry. Generation Z characteristics and its implications for companies. 9/11 divided Gen Z from millennials and affected their money habits. Can we choose our own identity? How to start a clothing line business. How much does it cost to start a fashion brand made in Britain? How to start a streetwear fashion brand in the UK — Elizabeth Stiles. Sportswear: the non-binary manifesto of Gen Z - Heuritech - Medium. Stop Marketing To Millennials Or Gen-Z And Start Marketing To Tribes. Illustrator Anshika Khullar creates snapshots of the lives of underrepresented people. SUPERCONSCIOUS BERLIN.