6 1 article play and self regulation. The Creativity Crisis: The Decrease in Creative Thinking Scores on the Torrance Tests of Creative Thinking: Creativity Research Journal: Vol 23, No 4. Changes in dispositional empathy in American college students over time: a meta-analysis. - PubMed - NCBI. How Neuroscience Can Help Your Kid Make Good Choices.

Imagine the following scenario: Your eight-year-old son is repeatedly poked with a pencil by his classmate at school. 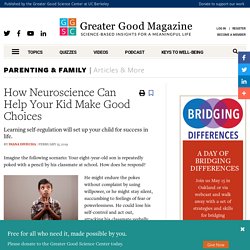 How does he respond? He might endure the pokes without complaint by using willpower, or he might stay silent, succumbing to feelings of fear or powerlessness. He could lose his self-control and act out, attacking his classmate verbally or poking him back. Or does your son “self-regulate” by considering his options and resources, taking stock of his feelings and strengths, reflecting on past experience, and responding deliberately? Self-regulation may sound like a tall order—but it’s also the best choice, according to Erin Clabough, a neuroscientist, mother of four, and author of the book Second Nature: How Parents Can Use Neuroscience to Help Kids Develop Empathy, Creativity, and Self-Control.

Unfortunately, the qualities that support self-regulation are on the decline among American children. UBC SEL Resource Finder. By [posts-author-link] on [date] July 13, 2015 Social and Emotional Learning in Canada Issue Brief This 11-page report, published in 2013, is unique for its focus on the current status of social and emotional learning in Canada. 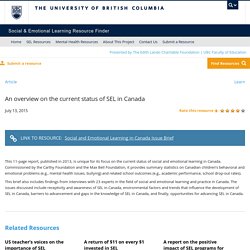 Commissioned by the Carthy Foundation and the Max Bell Foundation, it provides summary statistics on Canadian children’s behavioral and emotional problems (e.g., mental health issues, bullying) and related school outcomes (e.g., academic performance, school drop-out rates). This brief also includes findings from interviews with 23 experts in the field of social and emotional learning and practice in Canada. Related Resources This engaging report presents findings from a US survey of teachers conducted in December of… This groundbreaking 2015 report from the Center for Benefit-Cost Studies in Education at Columbia University’s… This report, published by the Collaborative for Academic, Social, and Emotional Learning (CASEL), presents findings…

UPDATED Social and Emotional Skills Well being, connectedness and success.pdf (website) NPR Choice page. Dr. Tania Singer and the Neuroscience of Empathy. The year is 1990 and a man is sitting across from a monkey. 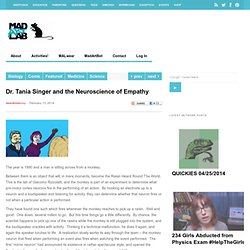 Between them is an object that will, in mere moments, become the Raisin Heard Round The World. This is the lab of Giacomo Rizzolatti, and the monkey is part of an experiment to determine what pre-motor cortex neurons fire in the performing of an action. By hooking an electrode up to a neuron and a loudspeaker and listening for activity, they can determine whether that neuron fires or not when a particular action is performed. They have found one such which fires whenever the monkey reaches to pick up a raisin. Well and good. Subsequent research revealed conclusively that, when we watch actions being performed, groups of pre-motor neurons fire in our brain that we ordinarily use to perform those actions ourselves.

The natural next question, then, was how deep these mirroring processes went. The challenge was to find a neural explanation for the phenomenon by creating situations fraught with empathetic meaning. As Dr. Dr. Ernesto Sirolli: Want to help someone? Shut up and listen! The Science of Sleep: Dreaming, Depression, and How REM Sleep Regulates Negative Emotions. By Maria Popova “Memory is never a precise duplicate of the original… it is a continuing act of creation. 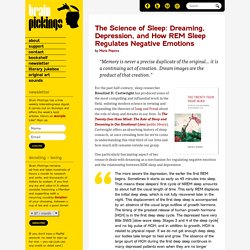 Dream images are the product of that creation.” For the past half-century, sleep researcher Rosalind D. Cartwright has produced some of the most compelling and influential work in the field, enlisting modern science in revising and expanding the theories of Jung and Freud about the role of sleep and dreams in our lives.

In The Twenty-four Hour Mind: The Role of Sleep and Dreaming in Our Emotional Lives (public library), Cartwright offers an absorbing history of sleep research, at once revealing how far we’ve come in understanding this vital third of our lives and how much still remains outside our grasp. One particularly fascinating aspect of her research deals with dreaming as a mechanism for regulating negative emotion and the relationship between REM sleep and depression: The more severe the depression, the earlier the first REM begins. 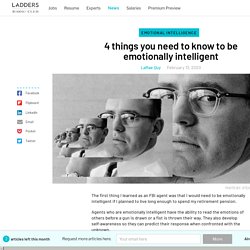 Agents who are emotionally intelligent have the ability to read the emotions of others before a gun is drawn or a fist is thrown their way. They also develop self-awareness so they can predict their response when confronted with the unknown. Ignorance of your competition makes you vulnerable; ignorance of yourself makes you stupid—LaRae Quy If you watch enough Marvel-inspired movies, you might think all superheroes swagger into a room, take control of the situation by intimidation or force, and knock the sh*t out of anyone who doesn’t play by their rules. The other extreme is the Hallmark TV channel where complex problems are solved in short, sappy, and sweet conversations. Most of us live life somewhere in between: we’re not superheroes nor are we chumps content with vacuous responses. 1. Are you mentally tough? 2. SELIssueBrief.

Related:  Neuroscience   -  it's all in the mind   -  neuro - bio   -  metaphusis   -  The Science of Sleep: Dreaming, Depression, and How REM Sleep Regulates Negative Emotions   -  Education   -  Enterprise