In other words, the greater the number of bystanders, the less likely it is that any one of them will help. This list describes the prototype of the effect and cites nine particularly heinous examples. The Parable of The Good Samaritan First, the prototype of the bystander effect. Jesus then explains, with the following parable, that everyone is everyone’s neighbor, and that help should be offered to anyone in need of it, regardless of who or what that person is. A Jew is going along the road, and is beset by bandits, who beat him severely, strip his clothes, and rob him. How to Overcome the Bystander Effect. Psychologists have long been interested in exactly why and when we help other people.

There has also been a tremendous amount of interest in the reasons why we sometimes don't help others. The bystander effect is a social phenomenon that occurs when people fail to help those in need due to the presence of other people. In many cases, people feel that since there are other people around, surely someone else will leap into action.1 While the bystander effect can have a negative impact on prosocial behavior, altruism and heroism, researchers have identified a number of different factors that can help people overcome this tendency and increase the likelihood that they will engage in helping behaviors.2 Some of these include: Witnessing Helping Behavior Sometimes just seeing other people doing something kind or helpful makes us more willing to help others. Imagine that you are walking into a large department store. Being Observant. How To Counteract The Bystander Effect - University of Pittsburgh Student EMS.

Counteracting The Bystander Effect It is a beautiful spring day in Oakland.

There are just a few weeks left until summer break and everyone is ready to go home. You are in Cathy studying and you see that the person a few tables over seems to be passed out. You notice they haven't moved in hours. Hundreds of people have walked by and seem to take notice but no one has done anything. Return To PITTect Your Friends HomePage Create your own unique website with customizable templates. Get Started. Taking action. Picking someone from the crowd. The Modern Bystander Effect.

Digital bystanders are a modern-day issue - The Signal. While on your way to Classroom South, an argument breaks out right in front of you between two people. 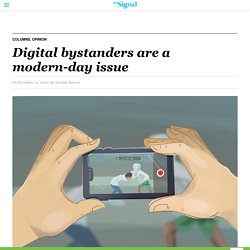 The argument then escalates into a fistfight, and you continue to stand there and observe. At that moment, you were a bystander. A bystander is a person who is present at an event or incident but does not take part.. Being a bystander can often lead to something called the bystander effect, which occurs when no one witnessing an event does anything to help because they see that others aren’t helping or assume in their head that those people have already helped. Seeing others not doing anything discourages them from doing something. How Bystanders can Help Stop Cyberbullying – Social Media Stories. “Someone made an Instagram account that said: “You’re a slut and you should kill yourself.” And I was the only person they followed.” In 2016, social media and mobile apps have made it simple, cost-effective, and fun to connect with anyone, anywhere. It’s hard to find someone who doesn’t have a Facebook, Twitter, or Instagram account.

Although the popularity of online communication has brought us new ways to interact with others, it’s also showed us the dark side of human behavior. Online bullying is just one example of how conversations on social media can go wrong. You’re probably familiar with the term “cyberbullying”, and you probably have a good sense of how serious it can be for victims. Bystanders in the Age of Cyberbullying We probably all believe that it’s important to stop bullying. While the Internet makes communication easier, it doesn’t necessarily make bystander intervention more likely.

There are other ways that online communication makes aggression harder to stop.