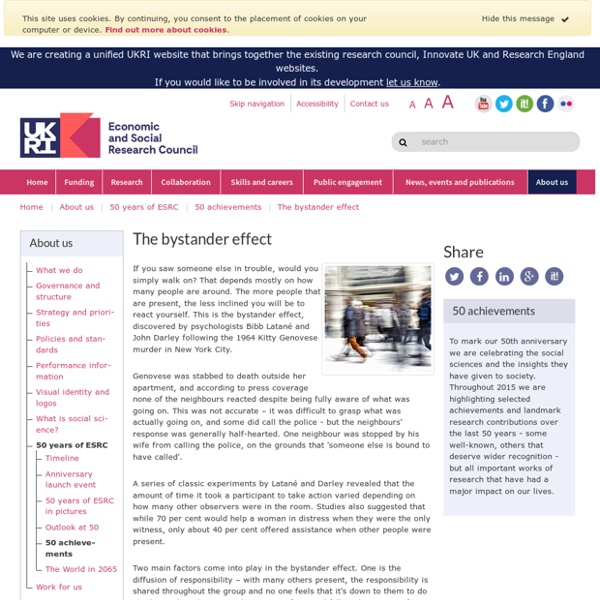 10 Notorious Cases of the Bystander Effect The bystander effect is the somewhat controversial name given to a social psychological phenomenon in cases where individuals do not offer help in an emergency situation when other people are present. The probability of help has in the past been thought to be inversely proportional to the number of bystanders. In other words, the greater the number of bystanders, the less likely it is that any one of them will help. What Is the Bystander Effect? If you witnessed an emergency happening right before your eyes, you would certainly take some sort of action to help the person in trouble, right? While we might all like to believe that this is true, psychologists suggest that whether or not you intervene might depend upon the number of other witnesses present. What Is the Bystander Effect? The term bystander effect refers to the phenomenon in which the greater the number of people present, the less likely people are to help a person in distress.

Bystander effect Bystander effect, the inhibiting influence of the presence of others on a person’s willingness to help someone in need. Research has shown that, even in an emergency, a bystander is less likely to extend help when he or she is in the real or imagined presence of others than when he or she is alone. Moreover, the number of others is important, such that more bystanders leads to less assistance, although the impact of each additional bystander has a diminishing impact on helping. Investigations of the bystander effect in the 1960s and ’70s sparked a wealth of research on helping behaviour, which has expanded beyond emergency situations to include everyday forms of helping. The bystander effect is being made worse by people filming violent events on their smartphones On April 9, 2017, a video of a man being dragged off a United Airlines flight was posted on the internet and went viral. But I don’t need to tell you that. Each of your most outspoken Facebook friends probably posted about the event, highlighting the aspects of it that best reinforced their worldview. The incident was covered all over American media and even sparked outrage in China. The collective focus may have now moved on to its next source of outrage, but there was something that only a few people noticed in the moment: a plane full of quiet passengers.

Why and How Do We Help? Source: Bystander effect research was stimulated, in part, by the infamous case of a young woman named Kitty Genovese, who was raped and murdered on the streets of Queens, NY. The crime happened late one night when Genovese's neighbors reportedly stood by and did nothing to intervene in the brutal attack despite hearing her screams. How to Overcome the Bystander Effect Psychologists have long been interested in exactly why and when we help other people. There has also been a tremendous amount of interest in the reasons why we sometimes don't help others. The bystander effect is a social phenomenon that occurs when people fail to help those in need due to the presence of other people. In many cases, people feel that since there are other people around, surely someone else will leap into action.1 While the bystander effect can have a negative impact on prosocial behavior, altruism and heroism, researchers have identified a number of different factors that can help people overcome this tendency and increase the likelihood that they will engage in helping behaviors.2 Some of these include:

Digital bystanders are a modern-day issue - The Signal While on your way to Classroom South, an argument breaks out right in front of you between two people. The argument then escalates into a fistfight, and you continue to stand there and observe. At that moment, you were a bystander.

The 21st century bystander effect happens every day online If you’re going to fall, injure yourself and need help, where is a good place to do it? Should you choose a busy thoroughfare or a deserted backstreet? Statistics and experiments in social psychology will tell you that if you need help, you should avoid dropping in a busy street, even if hundreds of people are passing through. This is because of a phenomenon known as the bystander effect. The more individuals gathered in one place, the less chance there is of one of them coming to the aid of a person in need. When an emergency situation occurs, it’s more likely that someone will come to the rescue if there are fewer or almost no witnesses.

Reducing the Bystander Effect As discussed, there are a number of factors that magnify the Bystander Effect. Fortunately, there are also a number of factors that weaken it. Once again, factors can be divided into characteristics of the situation, and of the people. Situational characteristics Dangers of the incident How Bystanders can Help Stop Cyberbullying – Social Media Stories “Someone made an Instagram account that said: “You’re a slut and you should kill yourself.” And I was the only person they followed.” In 2016, social media and mobile apps have made it simple, cost-effective, and fun to connect with anyone, anywhere. It’s hard to find someone who doesn’t have a Facebook, Twitter, or Instagram account.

Kitty Genovese The Kitty Genovese murder in Queens, New York, in 1964 is one of the most famous murder cases to come out of New York City and into the national spotlight. What propelled it wasn’t the crime or the investigation, but the press coverage that alleged the murder had many witnesses who refused to come to the Kitty Genovese’s defense. This has been disproved over time, but not before it became part of the accepted lore of the crime. Kitty Genovese was returning from work home at around 2:30 a.m. on March 13, 1964, when she was approached by a man with a knife. Genovese ran toward her apartment building front door, and the man grabbed her and stabbed her while she screamed. A neighbor, Robert Mozer, yelled out his window, “Let that girl alone!”

How To Counteract The Bystander Effect - University of Pittsburgh Student EMS Counteracting The Bystander Effect It is a beautiful spring day in Oakland. There are just a few weeks left until summer break and everyone is ready to go home. You are in Cathy studying and you see that the person a few tables over seems to be passed out. Diffusion of Responsibility: Definition and Examples in Psychology What causes people to intervene and help others? Psychologists have found that people are sometimes less likely to help out when there are others present, a phenomenon known as the bystander effect. One reason the bystander effect occurs is due to diffusion of responsibility: when others are around who could also help, people may feel less responsible for helping.