The Hidden Chakras: Understanding Our New Emerging Meridians. If you feel as though you have been going through a lot of changes over the past couple of months and you’re not quite sure what might be causing it, you’re not alone. 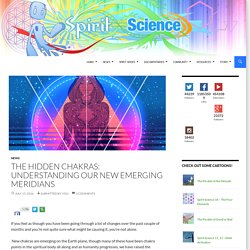 New chakras are emerging on the Earth plane, though many of these have been chakra points in the spiritual body all along and as humanity progresses, we have raised the vibration of the planet and ourselves. This has brought about the physical world presence of these new chakras which have, and will continue to manifest themselves on the physical plane, creating changes in all of us. Who is Affected? As you raise your vibration and consciousness, so too does Gaia (Mother Earth) and because of this, vast changes are occurring; chakras are merging, moving, and forming, an upgrade that will roll out in 3 stages. Importance of Foot Chakra. Article by Rinku Patel Foot Chakra is one of the most under-rated chakra amongst all the chakras we heal. 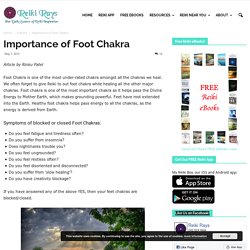 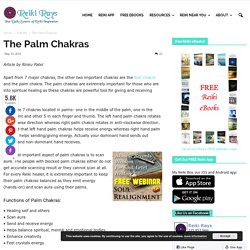 The palm chakras are extremely important for those who are into spiritual healing as these chakras are powerful tool for giving and receiving healing. Strengthening & Healing our Energy System with Reiki ~ Part I. Article by Kathi Rancourt December 21, 2012 marked an important date for those of us who identify as light workers and healers, and also for those of us human beings with an understanding of the Ascension process. 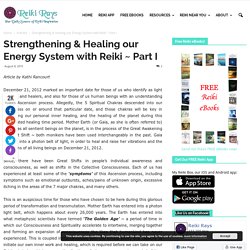 Allegedly, the 5 Spiritual Chakras descended into our awareness on or around that particular date, and those chakras will be key in facilitating our personal inner healing, and the healing of the planet during this accelerated healing time period. Mother Earth (or Gaia, as she is often referred to) as well as all sentient beings on the planet, is in the process of the Great Awakening or Great Shift ~ both monikers have been used interchangeably in the past. Gaia entered into a photon belt of light, in order to heal and raise her vibrations and the vibrations of all living beings on December 21, 2012. Since, there have been Great Shifts in people’s individual awareness and consciousness, as well as shifts in the Collective Consciousness. Red Jasper and Reiki. Article by Rinku Patel Hello everyone, Happy 2016! 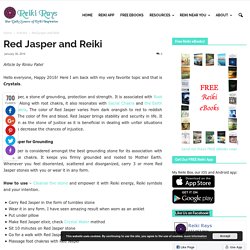 Here I am back with my very favorite topic and that is Crystals. Red Jasper, a stone of grounding, protection and strength. It is associated with Root Chakra. Along with root chakra, it also resonates with Sacral Chakra and the Earth Star Chakra. Teeth and Associated Organs, Emotions and Chakras. Article by Rinku Patel What do people do when they have general toothache or dental issues? 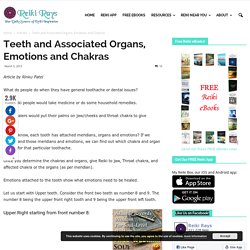 Non-Reiki people would take medicine or do some household remedies. Reiki healers would put their palms on jaw/cheeks and throat chakra to give healing. Importance of Foot Chakra. Prismatic Breathing. Article by Gregory Peters Color is a powerful tool for Reiki sessions that can be used to energize the aura with specific healing vibrations. 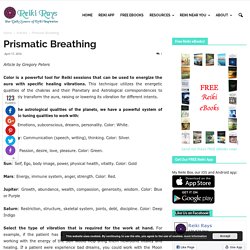 This technique utilizes the energetic qualities of the chakras and their Planetary and Astrological correspondences to effectively transform the aura, raising or lowering its vibration for different intents. Using the astrological qualities of the planets, we have a powerful system of energetic tuning qualities to work with: Moon: Emotions, subconscious, dreams, personality. Color: White. The Color Orange. Article by Deborah Lloyd, Reiki Master When I think of the color orange, my first thought is the wild and crazy ‘60’s and ‘70’s when psychedelic colors were the rage. 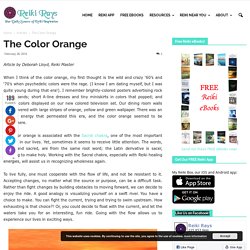 (I know I am dating myself, but I was quite young during that era!). I remember brightly-colored posters advertising rock ‘n roll bands; short A-line dresses and tiny miniskirts in colors that popped; and vibrant colors displayed on our new colored television set. The Palm Chakras. The Earth Star Chakra. Article by Rinku Patel Apart from 7 main chakras, there are many other chakras that play a vital role in our life and wellbeing. 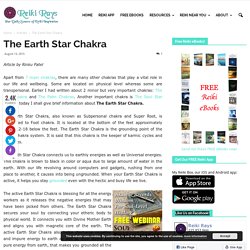 Some are located on physical level whereas some are transpersonal. Balance five elements with Reiki - Part 3 of 5 – Air. Article by Dhwani Parikh We have already talked about the earth and water elements before. 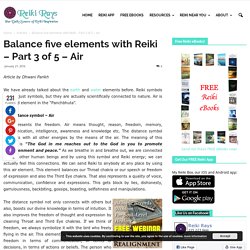 Article by Dhwani Parikh We have already talked about the earth, water and air elements before. Reiki symbols are not just symbols, but they are actually scientifically connected to nature. Fire is the fourth element in the “Panchbhuta”. Raku – the fire. Clearing Chakras via Distance Reiki. Article by Tammy Hatherill, Reiki Master Recently I received a very interesting email from an International Reiki Practitioner. She was curious about the possibility of clearing the chakras of a person via distance Reiki. Was this possible? Can it be done? Ear Chakras. Article by Ashwini Chubé We are very much aware of 7 basic chakras. In addition to those, there are many more chakras in our human subtle body. Each chakra has a function and its specific relevance. Water, Sacral Chakra and Sei Hei Ki.