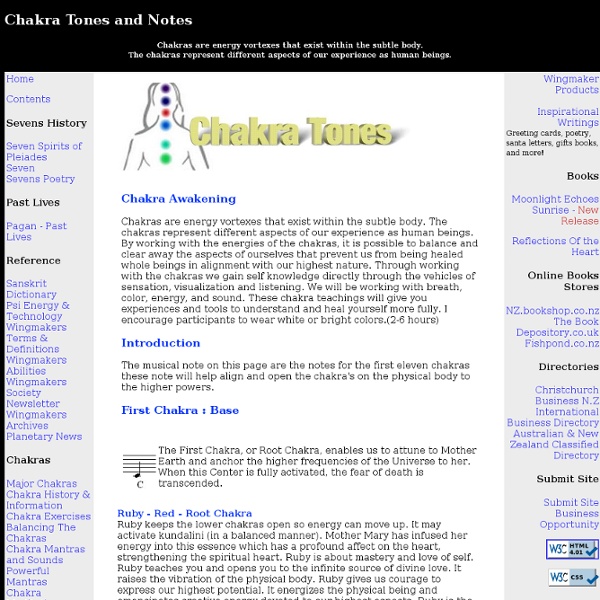 Ruby - Red - Root Chakra Ruby keeps the lower chakras open so energy can move up. It may activate kundalini (in a balanced manner). Mother Mary has infused her energy into this essence which has a profound affect on the heart, strengthening the spiritual heart. Ruby is about mastery and love of self. Ruby teaches you and opens you to the infinite source of divine love. It raises the vibration of the physical body. Each one of these musical notes aligns to one of the twelve major chakras on the physical body and playing the note will help open the chakra and if you hold a pendulum over the aligned chakra and listen to the notes of this scale you will notice that the chakra will spin faster and the energy body and the physical body will recieve more energy from the flow of the higher powers and it is also a great healing technique as well.

Seven Major Chakra Series - Learn about the Root Chakra root chakra | sacral chakra | solar plexus chakra | heart chakra | throat chakra | brow chakra | crown chakra The Base or Root Chakra is associated with the color red. This chakra is the grounding force that allows us to connect to the earth energies and empower our beings. Focusing one's attention on the color of a cherry popsicle or a juicy red apple can help bring our energetic body "down to earth" and in alignment with our physical body when we find ourselves energetically fleeting or in other words....."spacing off. Chakra One - Associations Learning About Chakras Are You Adequately Grounded? Bibliography: Anatomy of the Spirit by Caroline Myss, Flower Essence Repertory by Patricia Kaminski and Richard Katz, Hands of Light by Barbara Ann Brennan, Love is in the Earth by Melody

Description of the Chakras Written by © Ewald Berkers What chakras are and their psychological properties Chakras are centers of energy, located on the midline of the body. There are seven of them, and they govern our psychological properties. The chakras can have various levels of activity. Ideally, all chakras would contribute to our being. There exist lots of techniques to balance the chakras. . 1 - Root chakra The Root chakra is about being physically there and feeling at home in situations. If you tend to be fearful or nervous, your Root chakra is probably under-active. If this chakra is over-active, you may be very materialistic and greedy. . 2 - Sacral chakra The Sacral chakra is about feeling and sexuality. If you tend to be stiff and unemotional or have a "poker face," the Sacral chakra is under-active. If this chakra is over-active, you tend to be emotional all the time. . 3 - Navel chakra The Navel chakra is about asserting yourself in a group. . 4 - Heart chakra . 5 - Throat chakra . 6 - Third Eye chakra

Encyclopedia Britannica 7 Chakras: Kundalini Yoga Sukshma Prana moves in the nervous system of the Linga Sarira (astral body). Sthula Prana moves in the nervous system of the gross physical body. The two courses are intimately connected. They act and react upon each other. The Chakras are in the astral body even after the disintegration of the physical organism to death. According to a school of thought, the Chakras are formed during concentration and meditation only. Wherever there is an interlacing of several nerves, arteries and veins, that centre is called Plexuses. The subtle centres in the Sushumna Nadi are otherwise known as Lotuses or Chakras. The Seven Lower Chakras 1. 2. 3. 4. 5. 6. 7. This is the story of our evolution through the mind—from the gross to the refined, from darkness into light, from a consciousness of death to immortality. Each Chakra has a particular number of petals with a Sanskrit alphabet on each petal. The number of petals of the lotuses varies.

Transnational Institute Flower of Life - A Thorough Explaination The flower of life is a geometrical shape composed of multiple evenly-spaced, overlapping circles arranged in a flower like pattern with six fold symmetry like a hexagon. The perfect form, proportion and harmony of the FOL has been known to philosophers, architects and artist around the world. Pagans consider it to be sacred geometry containing ancient religious value depicting the fundamental forms of space and time. In the pagan sense, it is believed to contain a type of Akashic Record of basic information of all living things and is the visual expression of the connections of life that run through all sentient beings. In New Age thought, the Flower of Life has provided what is considered to be deep spiritual meaning and forms of enlightenment to those who have studied it as sacred geometry. There are groups of people all over the world who derive particular beliefs and forms of meditation based (at least in part) on the Flower of Life. © Token Rock, Inc.

Sociological Research Online The 7 Chakras for Beginners The seven chakras are the centers in our bodies in which energy flows through. Blocked energy in our seven chakras can often lead to illness, so it's important to understand what each chakra represents and what we can do to keep this energy flowing freely. Here's our quick summary: 1. Root Chakra — Represents our foundation and feeling of being grounded. Location: Base of spine in tailbone area. 2. Location: Lower abdomen, about two inches below the navel and two inches in. 3. Location: Upper abdomen in the stomach area. 4. Location: Center of chest just above the heart. 5. Location: Throat. 6. Location: Forehead between the eyes (also called the Brow Chakra). 7. Location: The very top of the head. If you want to learn even more about chakras, and how to open each to harness your spiritual energy to feel truly alive, check out our course, Chakras 101: How To Harness Your Spiritual Energy For Better Sex, Better Sleep & Better Moods. Error loading player: No playable sources found