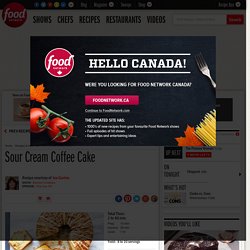 Grease and flour a 10-inch tube pan.Cream the butter and sugar in the bowl of an electric mixer fitted with the paddle attachment for 4 to 5 minutes, until light. Add the eggs 1 at a time, then add the vanilla and sour cream. In a separate bowl, sift together the flour, baking powder, baking soda, and salt. With the mixer on low, add the flour mixture to the batter until just combined. Finish stirring with a spatula to be sure the batter is completely mixed.For the streusel, place the brown sugar, flour, cinnamon, salt, and butter in a bowl and pinch together with your fingers until it forms a crumble.

Cinnamon Sugar Candied Nuts. You won’t believe how easy this is to make, and it’s the perfect budget-friendly gift for family and friends! 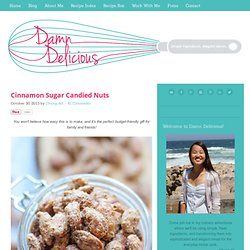 Candied nuts is one of the best things to snack on. They’re considered brain food, they’re heart healthy and they keep the bad cholesterol away. And when you roast them in cinnamon sugar goodness, they are completely i-r-r-e-s-i-s-t-i-b-l-e. Not only are these nuts chockfull of healthy benefits but it’s also so unbelievably easy to make! Cinnamon Sugar Candied Nuts. Skillet.lifehacker. Strawberry Cheesecake Chimichangas - All food Recipes chicken recipes,easy chicken recipes. Chimichanga, also known as chivichanga or chimmy chonga is a deep-fried burrito that is popular in Southwestern U.S. cuisine, Tex-Mex cuisine, and the Mexican states of Sinaloa and Sonora. 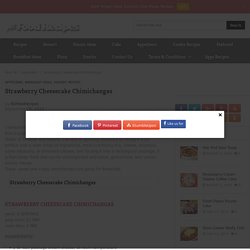 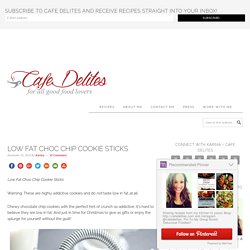 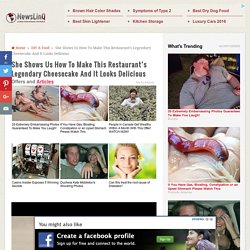 Grease a 9-inch springform pan with melted butter or cooking spray. Make the crust: Thoroughly mix together the nuts, graham crackers, vanilla wafers, and melted butter in a medium bowl. Make the filling: Using a stand or hand mixer, beat the cream cheese on low until light and fluffy. Pour the cheesecake filling into the springform pan, shaking the pan to ensure that the filling is evenly distributed. Fried Apples - Thinkarete. Cracker Barrel Old Country Store Fried Apples I just love the fried apples at Cracker Barrel, Going to Cracker Barrel reminds me of enjoying old-style home cooking, and their fried apples remind me of growing up. 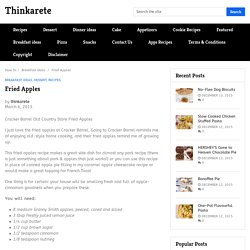 How to make CARAMEL IN A MICROWAVE. Pumpkin Spice Buns Recipe. Directions For the dough: Add the milk and 1/2 cup water to a medium saucepan and warm over low heat until it is about 100 degrees F (but no more than 110 degrees F). 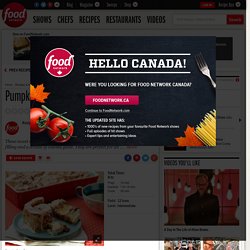 Remove from the heat and sprinkle the yeast over the surface over the liquid. Sprinkle a pinch of the granulated sugar over the top and set aside without stirring, until foamy, about 5 minutes. Whisk in 4 tablespoons of the butter, the vanilla and egg yolk until well combined. Whisk the flour, remaining granulated sugar and 3/4 teaspoon of salt together in a large bowl. Butterscotch Peanut Butter Bars Recipe : Trisha Yearwood. Chocolate Chip Cookie Dough Recipe. Index. Sour Cream Cheesecake Recipe : Alton Brown. Directions Watch how to make this recipe Preheat oven to 300 degrees F. 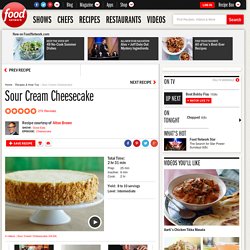 Brush some of the melted butter around a 9 by 3-inch cake pan. Adhere parchment to the bottom and the sides. In a small bowl, combine crumbled graham crackers, the remaining melted butter, and 1 tablespoon of sugar. In a mixer with a paddle attachment, beat sour cream for 10 seconds. In a separate container, combine vanilla, eggs, yolks, and heavy cream. Lower oven temperature to 250 degrees F. 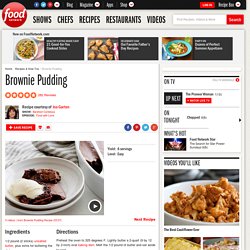 Lightly butter a 2-quart (9 by 12 by 2-inch) oval baking dish. Melt the 1/2 pound of butter and set aside to cool. In the bowl of an electric mixer fitted with the paddle attachment, beat the eggs and sugar on medium-high speed for 5 to 10 minutes, until very thick and light yellow. Cinnamon Crisps. First of all, these crisps are about the most delicious things you’ll ever eat. 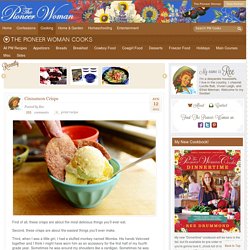 Second, these crisps are about the easiest things you’ll ever make. Third, when I was a little girl, I had a stuffed monkey named Womba. His hands Velcroed together and I think I might have worn him as an accessory for the first half of my fourth grade year. Cinnamon Ice Cream. To paraphrase the great Will Rogers: I never met an ice cream I didn’t like.

Wait. I take that back. I accidentally had a bite of banana ice cream once, and I can honestly say that I didn’t like that ice cream. Cream Cheese Frosting Recipe. Quick Vanilla Buttercream Frosting Recipe. Chocolate Buttercream Frosting Recipe. Directions Chop the chocolates and place them in a heat-proof bowl set over a pan simmering water. Stir until melted and set aside until cooled to room temperature. Mix the egg whites, sugar, cream of tartar, and salt in the bowl of an electric mixer fitted with a whisk attachment. Place the bowl of egg whites over the pan of simmering water and heat the egg whites until they are warm to the touch, about 5 minutes. Return the bowl to the electric mixer and whisk on high speed for 5 minutes, or until the meringue is cool and holds a stiff peak. Carrot Cake with Marshmallow Fluff Cream Cheese Frosting Recipe : Bobby Flay.

Directions Preheat the oven to 350 degrees F. Almond Layer Cake with White Chocolate Frosting Recipe. Royal Icing Recipe : Alton Brown. Simple Birthday Cake with Marshmallow Frosting Recipe : Alex Guarnaschelli. Special equipment: 2 (8 by 2-inch) round cake pans and an instant-read thermometerCake:Preheat the oven to 350 degrees F.Liberally butter the bottom and sides of 2 cake pans. Put a round of parchment paper into the bottom of each pan and coat them with butter. Put the pans on a baking sheet.Melt the 10 tablespoons of butter in a small pot over low heat. Gingerbread Cookies with Royal Icing Recipe : Sandra Lee. Caramel Stuffed Snickerdoodles ! ~ Easy Recipes.

Homemade Crispy Candy Bars Recipe. Homemade cookies are good. Homemade brownies are tasty. Let's Have a Quickie! No Bake Oreo Ice Cream Cake. Easy No Bake Oreo Truffles. Easy No Bake Oreo Truffles. Chocolate Pudding Dump Cake. Giant S’mores Stuffed Chocolate Chip Cookies. I swear I wasn’t going to do this. I wasn’t going to stuff something inside of something else. It was too trendy. And then, not trendy at all. (Neither of which I’m actually about, anyway.) Vanilla Blueberry Muffins {+Giveaway} Chocolate Chip Cookie Dough Brownie Bombs.