Banana Bread Brownies. This recipe is a win win – half banana bread, half brownie, no dairy, no gluten, and barely any sugar. 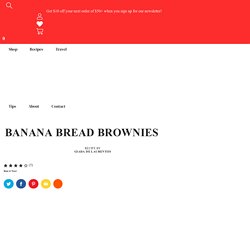 These banana bread brownies are just as tasty for dessert as they are for a midday snack… and with oats, bananas, almond flour and almond butter, they’re even virtuous enough to eat for breakfast! Plus, I think these are even better the next day, or after hanging out in the fridge (covered!) For a few days. In the mood for something more traditional? 30+ Easy Keto Dessert Recipes - Best Low Carb Desserts for Keto Diets. Peach Cobbler Recipe. Anytime Peach Cobbler. Sharing is caring! 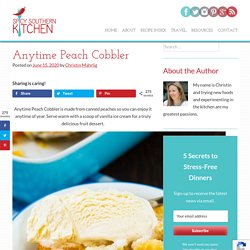 Anytime Peach Cobbler is made from canned peaches so you can enjoy it anytime of year. Serve warm with a scoop of vanilla ice cream for a truly delicious fruit dessert. Of course nothing beats cobbler made with fresh peaches, but peaches are at their prime for only a short amount of time each year. This Anytime Peach Cobbler is a good substitute when you don’t have access to fresh, ripe peaches.

Pumpkin-cranberry scones. How To Make Best S'mores Krispie Treats Recipe. These bars are a cross between Rice Krispies treats and s'mores—and we're OBSESSED. 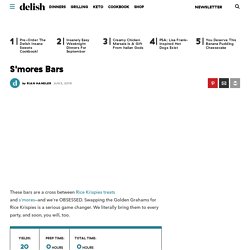 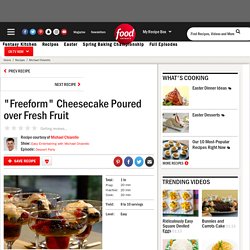 Add a pinch of salt and the lemon zest. While the mixer is running, gradually pour in the lemon juice and almond liqueur. Incorporate the eggs 1 at a time, beating well after each addition and scraping down the sides of the bowl once or twice. Gradually add in the sugar and beat until completely blended, then add the mascarpone and beat until smooth. Transfer the mixture to a large heatproof bowl. Toss the fruit with the lemon juice and sugar. Chocolate Cobbler with Cherry Ice Cream Recipe. BBC Food - Recipes - Galette. Brownie Tart Recipe. Watch how to make this recipe. 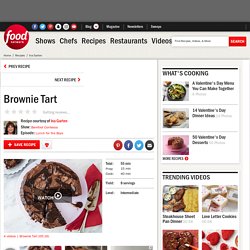 Grease and flour a 9-inch tart pan with removable sides. Preheat the oven to 350 degrees F. Melt the butter in a bowl set over simmering water. Add 2 cups of the chocolate chips, remove from the heat, and stir until the chocolate melts. Set aside to cool completely. In the bowl of an electric mixer fitted with the paddle attachment, beat the eggs, sugar, coffee, and vanilla on medium-high speed until light and fluffy, about 3 minutes. Melt the remaining 1/4 cup of chocolate chips with the heavy cream and drizzle on the tart. Chocolate Pots de Creme Recipe. Position a rack in the middle of the oven and heat the oven to 325 degrees F. 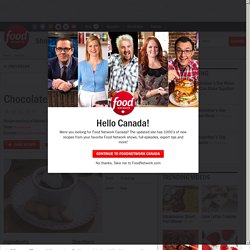 Put the chocolate into a medium bowl. Combine the cream and milk in a small saucepan and bring to a boil over medium heat. Pour the hot cream over the chocolate. Chocolate Pots de Creme Recipe. Apple Tarts Recipe. Watch how to make this recipe. 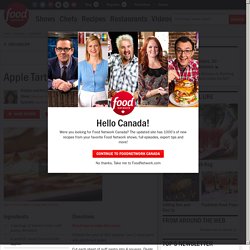 Preheat the oven to 400 degrees. Line 2 sheet pans with parchment paper. Cut each sheet of puff pastry into 4 squares. Divide the pastry between the prepared sheet pans and refrigerate while you prepare the apples. Peel the apples and cut them in half through the stem. Bake for 40 minutes, until the pastry is browned and the edges of the apples start to brown. Eton Mess Recipe. Abc.go. Nutella Stuffed Salted Caramel Blondies - Cafe Delites. Indian Pudding Recipe : Alex Guarnaschelli. Mexican Chocolate Blender Flan Recipe by Carla Hall. Sauteed Apples with Ginger Snap Crumble Recipe : Damaris Phillips. Mint Chocolate Chip Ice Cream Recipe. Outrageous Brownies Recipe : Ina Garten. Directions Watch how to make this recipe. 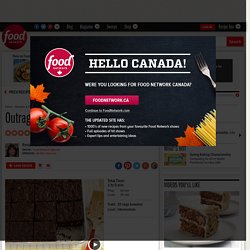 Preheat oven to 350 degrees F. Butter and flour a 12 x 18 x 1-inch baking sheet. Melt together the butter, 1 pound of chocolate chips, and the unsweetened chocolate in a medium bowl over simmering water. Allow to cool slightly. In a medium bowl, sift together 1 cup of flour, the baking powder, and salt. Bake for 20 minutes, then rap the baking sheet against the oven shelf to force the air to escape from between the pan and the brownie dough. Copyright 1999, The Barefoot Contessa Cookbook This was adapted from a recipe for chocolate globs in the Soho Charcuterie Cookbook. Entertaining Ideas & Party Themes for Every Occasion. 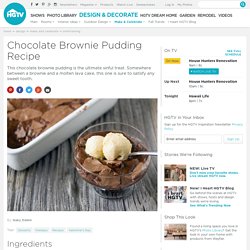 Preheat oven to 325° F, and lightly butter a 9x9 baking dish. 2. Melt butter in a small saucepan and set aside to cool. 3. Sift cocoa powder and flour together in a medium bowl and set aside. 4. Moelleux au Chocolat. For the cakes: Butter 6 ramekins and line with a disk of parchment paper, and then butter the parchment. 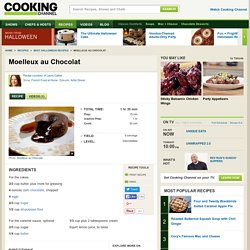 In a double boiler, bowl or saucepan, very gently melt the butter and chocolate together over a water bath. In a separate mixing bowl, beat the eggs and sugar until thick, pale, and ribbony. Beat in the flour, and finally the chocolate mixture. Pour the mixture into the ramekins and chill. Just before serving, preheat the oven to 400 degrees F.

Peanut Butter Pie Fudge. For the crust: Preheat the oven to 340 degrees F. Break up the cookies into small pieces and press into a 9-by-9-inch baking pan. Brush with melted butter. Bake for 11 minutes. Mmm-Mmm Better Brownies Recipe. Gooey Mud Hen Bars Take Brownies to the Next Level. How to Make Brown Butter Cupcake Brownies. When she has the kitchen all to herself, Phyllis Grant of Dash and Bella cooks beautiful iterations of what solo meals were always meant to be: exactly what you want, when and where you want them. Today: Find beauty in the mayhem. This weeknight-friendly, deceptively simple take on a chocolate brownie will help. Friday morning. I stare at twelve duck legs, two frozen lamb shanks, and twenty sausages.

I don’t quite believe it, but by Sunday night, in order to celebrate multiple family birthdays, this pile of meat will morph into an enormous pot of French stew. » RELATED: Black-Eyed Pea Cassoulet. Peanut Butter Stuffed Brownies. - Sallys Baking Addiction. Fudgy homemade chocolate brownies stuffed with a peanut butter filling and topped with peanut butter and chocolate chips.

Lemon Bars Recipe : Ree Drummond. The Best Brownies Recipe - Food.com. Baked NYC - Sweet and Salty Brownies. In our seemingly endless effort to ferret out the best brownies on the planet, for you, our devoted readers, we come to you today with yet another contender for the title. Many of you will recall our first foray into "Baked NYC" territory with this post about them back in January. In it, we put the original "Baked" brownie to the test, and found we really loved it's deep dark flavor, and almost fudge like consistency. Well, the guys at Baked Bakery in Brooklyn are back with not only a new cookbook called Baked Explorations , but also a new take on their now famous brownie. To put it simply, the Sweet and Salty Brownie is their original on steroids, and while we may hold steroids and all those stupid athletes that use them in low regard, in this instance, they are a VERY GOOD THING! These brownies hang onto all that was good about the original, the insane chocolate flavor, and the cakey at the edge, but dense-as-night in the middle consistency that we all loved.

This week, Ree’s in Orlando, ditching the boots for a pair of flip flops. Right now, she’s either lost in Wally World, hiding in the bathroom, or clutching the bars of some insane ride and crying for her mommy. So we have another special guest filling in for this week’s Tasty Recipe post! Today, missamy takes over with a decadent chocolate dessert that looks almost too good to be true.

If you remember Amy from her feature some months back, then you know you’re in for a wild and delicious ride. It’s all yours, Amy! When I was invited to guest post here I was filled with glee and honored to have been asked to fulfill such a task. So when I saw this recipe, My Granny’s Chocolate Cobbler submitted by Tasty Kitchen member Susan Hawkins, I knew I had to give it a try.

This cobbler reminds of a Molten Chocolate Lava Cake, like the one Ree once shared. The ingredients are simple. Begin with the flour in a mixing bowl. Okay, back to the recipe. Chewy Chocolate Caramel Bars. Four-Layer Caramel Crunch Brownies. Shortbread Brownies. Caramel-Hazelnut Brownies. Peanutty Brownie Bars.