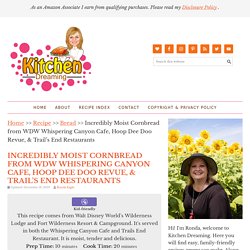 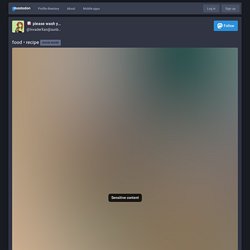 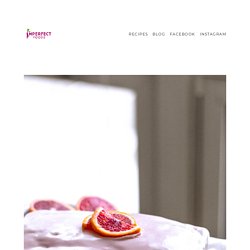 With zesty citrus flavor and an eye-catching glaze, this blood orange pound cake will brighten up your winter days. Ingredients. Citrus Almond Upside Down Cake — Imperfect Produce-Ugly Produce. Delivered. What’s the best way to make the most of a pile of citrus fruit? 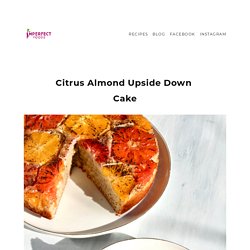 Spiced Pears with Pomegranate and Almonds — Imperfect Produce-Ugly Produce. Delivered. Pears often get overshadowed by apples this time so here is an easy, seasonal dessert that lets pears shine! 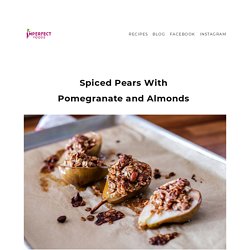 Baking them with spices brings out their natural sweetness and will make your kitchen smell positively amazing. Try this recipe next time you’re entertaining a crowd and want to end the meal on a cozy note. Ingredients. One Pan Pork Chops with Apples and Onions. These pork chops have everything you love about a comforting Fall dish… mouthwatering, well balanced flavors, is healthy yet hearty, and is made in just ONE pan in 30 minutes! 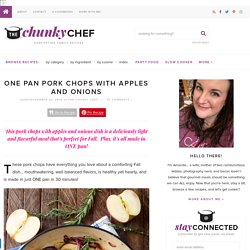 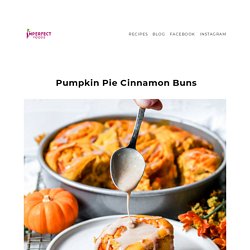 If there’s anything I love more than Fall and pumpkin picking, it’s all the glorious baking you can do with the produce in season this time of year. These buns are the best of fall through and through. 30 Minute Mozzarella Recipe. Prepare Work AreaDo not prepare any other food while you are making cheese. 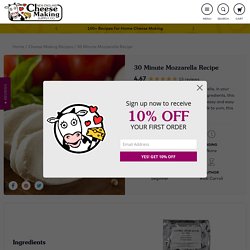 Put all food products away.Move all sponges, cloths and dirty towels away from your work surface, wipe your sink and stove with soap and water. Finally use your antibacterial cleaner to wipe down all surfaces. Prepare RennetCrush 1/4 tablet of rennet and dissolve in 1/4 cup of cool non-chlorinated water, or add 1/4 tsp single strength liquid rennet to the water. Set your rennet mixture aside to use later. Mix Citric Acid & MilkAdd 1 1/2 tsp. of citric acid to 1 cup cool water, pour this into your pot.Now, pour cold milk into your pot quickly, to mix well with the citric acid. Heat MilkHeat the milk slowly to 90°F. 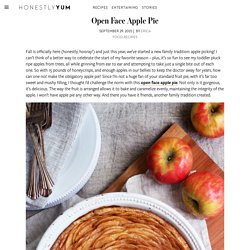 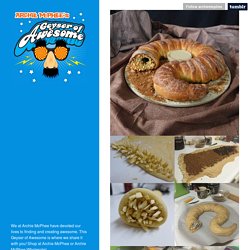 And whoever learns to make this awesome Spice-Filled Sandworm Bread will be among the geekiest bakers on Earth and Arrakis alike. The giant sandworms, or Shai-Hulud, of Frank Herbert’s Dune universe are enormous cylindrical creatures, some more than 400 meters long, with huge mouths full of sharp, crystalline teeth. This bread version, created by Chris-Rachael Oseland of Kitchen Overlord, is much, much smaller and has teeth made of almonds.

However, based on how Paul Atreides described the breath of the first sandworm he ever encountered, they’re both full of cinnamon. Tumblr. Tumblr. Protomlad: weeheartfood: Marshmallows dipped... Lunch today: - Nico. Tumblr. Isyris' recipes and food stuff — Crock Pot Pork Chops. Tumblr. Tumblr. Tumblr. Tumblr. Cream cheese pound cake + strawberry coulis. Meet my new favorite pound cake. I have had this cake bookmarked for, oh, 100 years or so and while some recipes that I unearth from their 100-year queue are the kinds of disappointments that did not improve with age, this is of the opposite variety: Why did it take me so long to make this? Here, let me kick myself a few times. I’d argue that it was fear. Pound cakes are of British origin, dating back nearly 300 years and their name came from the fact that original pound cakes contained one pound each of butter (four sticks), sugar (two cups), eggs (eight large) and flour (four cups), with no leaveners other than the air that was whipped into the batter.

They tend to be a bit heavy and dense but it’s hard to argue that this type is not for you when anything else is not a true pound cake. When it becomes clear that a little erring from the pound cake doctrine is in order, one can go in a lot of directions. Cabbage and Sausage Foil Packets. XXL Slow Cooker Chocolate Chip Cookie. Everyone gets cravings for cookies now and again, right? But what about when you get a huge craving for an even huger cookie?? For those times when you want to feed a crowd (or for when you just need a little more cookie for yourself), this recipe is just the ticket. It’s a slow cooker chocolate chip cookie – an XXL cookie, no less, that has just as much inner ooey-gooeyness as it does perfectly crisp edges. Win-win! Proper 12T 12tomatoes_abovevideo To achieve such greatness, all you need to do is whip up a quick dough for your XXL cookie. Garlic Parmesan Chicken Tenders Recipe - Five Minute Prep! (VIDEO) Farm Fresh To You - Recipe: Smokey Zucchini Chips.

Cloud Bread. Cloud Bread is an easy to make, light and fluffy bread substitute. These are low carb, under 40 calories each and the perfect way to lighten up a sandwich! Easy Recipes, TV Shows and Videos. 30 Minute BBQ Boneless Pork Ribs. Skillet Orange Chicken Recipe. This post may contain affiliate links. Please read my disclosure policy. This Skillet Orange Chicken Recipe is so easy to make — it comes together in 30 minutes or less! Serve it with rice and steamed vegetables or salad and you have an easy weeknight meal and you didn’t even have to get takeout. This recipe for Orange Chicken has a crispy exterior and a sweet, sticky, tangy sauce that comes together all in one pan. Brown Sugar Delicata Squash Recipe - Dinner at the Zoo. Honeycomb recipe. The Science of the Best Chocolate Chip Cookies. [Photographs: J. Kenji Lopez-Alt] "Stop making cookies. " I'm sorry, what was that dear? "I said, stop making cookies.

" That's odd, I thought to myself. Then, as I glanced around the apartment, wiping chocolate-specked hands against my apron, running a finger across the countertop and tracing a line into the dusting of white powder that coated every surface in the kitchen, eyeing the dozens of bags of failed experimental cookies that blocked the television, opening the refrigerator door to discover that more than half of its contents were batches of uncooked cookie dough in various stages of rest, I thought, maybe she does> have a point.

The freshness reminds me of summer, which I desperately need right now. Million Dollar Pound Cake - melissassouthernstylekitchen.com. This rich and buttery Million Dollar Pound Cake has been rotating through Southern kitchen for decades. It’s made with 7 simple pantry ingredients and it’s amazing served on it’s own, with berries and fresh whipped cream, lemon curd, ice cream or countless other options.