Alton Brown's Frozen Peach Pie Recipe. Alton Brown's Homemade Marshmallows. S'mores dip: A camping treat without the campfire pit - Hungry brownie. I hate to admit it but I am new to this wonderful world of s’mores. 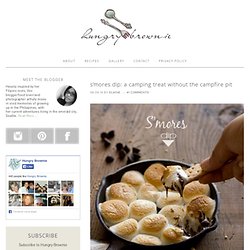 It’s not that we don’t have marshmallows and graham crackers in the Philippines, but when one would say “graham crackers”, I would immediately think about Filipino’s refrigerator cake. Another reason is my family didn’t really do a lot of camping, which I believe where s’mores are most famous for. The very first time I had s’mores was during my very first camping trip since moving to the Pacific Northwest four years ago. My husband taught me how to lightly roast the marshmallow and sandwich it between graham crackers with chocolate. It was a piece of heaven! This recipe for S’mores dip is a good alternative to traditional s’mores-making without making use of the campfire. Gluten-Free Recipe: Protein-Packed Beetroot Brownies. Chocolate Peanut Butter Brownie Bites - Chocolate Covered Katie. If you told me 10 years ago that someday I’d love to babysit, I most likely would’ve rolled my eyes and thought you were crazy. 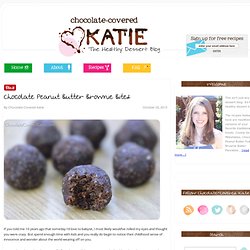 But spend enough time with kids and you really do begin to notice their childhood sense of innocence and wonder about the world wearing off on you. I spent Thursday night taking care of a friend’s incredibly precocious and adorable girls, rediscovering Barbie dolls, princesses, couch cushion forts, and the Disney channel… And trying to explain dial-up internet and a VCR to someone with her own tumblr page who’s had a cell phone since birth. Another amazing thing about children is that they just never seem to run out of energy. Even after the Barbies went to Prom and the princess married the dragon (don’t ask :-?) , my babysitting charges weren’t the slightest bit tired. Candy Corn {Cookbook of the Month Recipe} - Taste and Tell. Single Layer Wedding Cake Berries. Cherry Pie Recipe.

Funfetti Cake Dip. Are you ready for the greatest party ever in your mouth?? Yes I went there. I first tried this funfetti dip at my girlfriend's Stella and Dot jewelry party and we literally couldn't stop eating it! I immediately thought that I had killed my diet since this tasted just like I was licking cake batter directly out of the bowl, but au contraire my friends! This is actually really low in fat and calories and is the perfect go-to sweet treat when you're craving those chocolate chip cookies or that yummy slice of cake. And don't even get me started on how easy this is to make. Here, allow me to show you. Maruya I (Banana Fritters) Brazilian Peanut Fudge Recipe. Atholl Brose: nectar of the Scots. September 29, 2011 11:09 Filed in: Scotland Until recently, I knew "Athole-Brose" as a dreamy, soaring song by the Cocteau Twins, a Scottish alternative rock band "known for complex instrumentation and atmospheric, non-lyrical vocals. 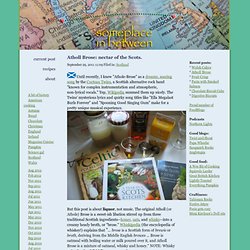 " Yep, Wikipedia summed them up nicely. The Twins' mysterious lyrics and quirky song titles like "Ella Megalast Burls Forever" and "Spooning Good Singing Gum" make for a pretty unique musical experience. But this post is about liquor, not music. The original Atholl (or Athole) Brose is a sweet-ish libation stirred up from three traditional Scottish ingredients--honey, oats, and whisky--into a creamy heady broth, or "brose. " Sound weird and unappetizing? Some Atholl Brose recipes call for just the oats, whisky and honey, resulting in a clear(ish) brew, and some add measures of heavy cream for a slightly more substantial liqueur. If this talk of oatmeal is giving you flashbacks to gluey gray globs served by your ever-lovin' mum on cold school mornings, wait! Scottish Empire Biscuits recipe. Brazilian Peanut Fudge Recipe. Brazilian Food – Brigadeiro Recipe. 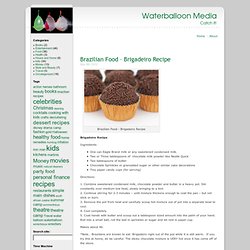 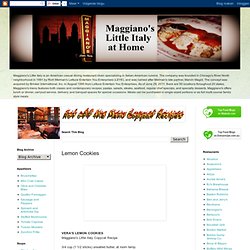 Add the egg yolks, vanilla, and salt and beat to combine.Gradually add the flour, mixing until just incorporated. Divide the dough in half and shape into 1 1/4 inch diameter logs. Wrap in wax paper and refrigerate until firm, about 30 minutes. Heat oven to 350 degrees. In a small bowl, whisk together the confectioners’ sugar, lemon juice, and zest until it forms a thick but pourable glaze (add more lemon juice if necessary). Cherry Pie Recipe.