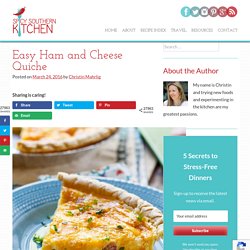 Easy Ham and Cheese Quiche is a rich and cheesy quiche that can be eaten for breakfast, lunch, or dinner. It’s perfect for using up leftover Easter ham. I love making quiches. They are versatile, so easy to make, and great for using up leftovers. If you find yourself with leftover holiday ham, this quiche takes just minutes to prep. Pour the filling into the pie crust, pop it in the oven and 45 minutes later your quiche is ready. Tastes great warm from the oven or after being chilled in the refrigerator. If you’d like to make a homemade Piecrust watch the video below and find the recipe here. 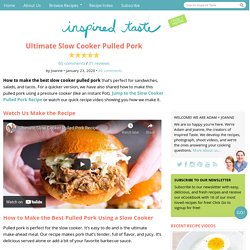 For a quicker version, we have also shared how to make this pulled pork using a pressure cooker (like an Instant Pot). Jump to the Slow Cooker Pulled Pork Recipe or watch our quick recipe video showing you how we make it. Watch Us Make the Recipe How to Make the Best Pulled Pork Using a Slow Cooker Pulled pork is perfect for the slow cooker. The slow cooker shines in this recipe. It’s a relatively tough cut and does well when cooked over an extended period. Search Page. Pochero Recipe. Pochero or Puchero is a well-loved Filipino stew. 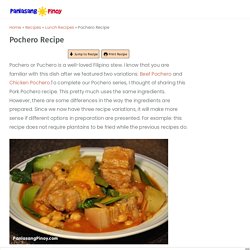 I know that you are familiar with this dish after we featured two variations: Beef Pochero and Chicken Pochero.To complete our Pochero series, I thought of sharing this Pork Pochero recipe. This pretty much uses the same ingredients. However, there are some differences in the way the ingredients are prepared. Since we now have three recipe variations, it will make more sense if different options in preparation are presented.

For example: this recipe does not require plantains to be fried while the previous recipes do. Bacon and Mushroom Smothered Pork Chops. Best Ham & Cheese Tortellini - How to Make Ham & Cheese Tortellini. Creamy Orecchiette with Hot Sausage, Broccoli and Sun-Dried Tomatoes - Rachael Ray. Bring a large pot of water to a boil for the pasta In a small bowl, cover the sun-dried tomatoes with very hot water. 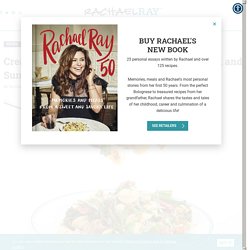 Let stand until softened, about 10 minutes. Drain and rinse, then chop or thinly slice. In a large skillet, heat the oil, two turns of the pan, over medium-high. Add the sausages; cook, stirring often and breaking up the meat with a spoon, until browned, about 5 minutes. Salt the boiling water and add the pasta. Divide among bowls or serve in a large bowl. Best Pork Medallions With Balsamic Honey Glaze recipes. 25-Minute Unstuffed Pork Chops Recipe. Tangy Slow Cooker Pork Roast Recipe. Stuffed Delicata Squash with Chicken Sausage-Mushroom Stuffing. 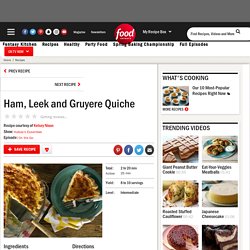 Pulse together the flour and salt in a food processor. Add the chilled butter and pulse just until the butter is evenly distributed throughout. Add the sour cream and continue to pulse 2 to 4 more times until just incorporated. Add 2 tablespoons of ice water at a time, pulsing after each addition, until the dough starts to hold together. Add more water as needed. Chicken or pork schnitzel with slaw and potatoes. Spicy Sausage Lasagna with Pesto Recipe. Mario Batali Fresh sheets of pasta are layered with spicy Italian sausage, Besciamella, and freshly grated Parmesan. 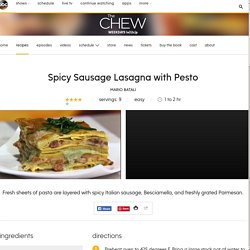 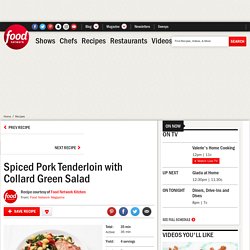 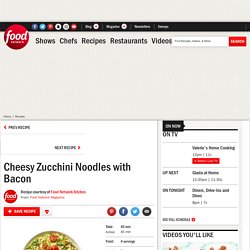 Set aside. Put a baking sheet in the oven and preheat to 425 degrees F. Toss the tomatoes with 1 tablespoon olive oil in a bowl and season with salt and black pepper. Spread on the hot baking sheet and bake until the tomatoes are slightly softened and just browned around the edges, 7 to 10 minutes. Meanwhile, cook the bacon in a medium nonstick skillet over medium heat until browned and crisp, about 7 minutes. Heat the remaining 1 tablespoon olive oil in a large nonstick skillet over medium-high heat. Marinated Pork Chop with Pineapple Salsa Recipe. Bone-in Pork Chops with Brown Butter, Balsamic and Beans - Rachael Ray. This recipe originally appeared on the Rachael Ray Show. 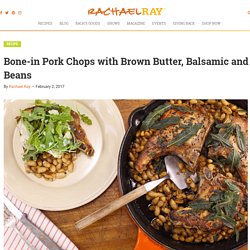 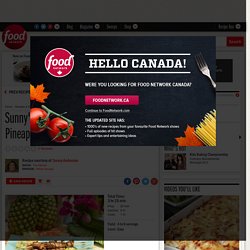 Preheat the oven to 400 degrees F. In a large ovenproof skillet heat the vegetable oil over high heat. Season the pork loin all over generously with salt and pepper. Sear the meat until golden brown on all sides, about 2 to 3 minutes per side. Add the onion, carrot, celery, garlic, herb sprigs, and 2 tablespoons of the butter to the skillet. Transfer the pork a cutting board and cover it loosely with foil while you make the sauce. Remove the strings from the roast and slice into 1/2-inch thick pieces and arrange over the apple mixture. Cook's Note: Pork cooked this way will be slightly pink. Copyright 2005 Television Food Network, G.P. From Food Network Kitchen. Homemade Deviled Ham Sandwiches Recipe. Roasted Pork Tenderloin with Apples Recipe - Clinton Kelly - The Chew. Carla Hall's Dry-Rubbed Pork Tenderloin And Pickled Cabbage Sandwiches - The Chew. Thai Style Meatballs Recipe - Michael Symon - The Chew. Mushroom and Cheddar Pork Sausages Recipe : Damaris Phillips.

Directions Season the mushroom with 1 teaspoon salt and set aside in a bowl in the refrigerator to allow it to release any moisture. Put the Cheddar and pork on 2 quarter-sheet trays and freeze just until firm, about 1 hour. Using a stand mixer fitted with the coarse grind attachment, grind the pork into the bowl of the stand mixer. Add 1 tablespoon salt, the pepper and sage and toss to combine. If the meat feels warm, place it in the freezer for a few minutes until it cools. Preheat the oven to 450 degrees F. Bring a 6-quart saucepan full of water to a boil. Place on a bun, top with mustard, and enjoy. Honey-Mustard Pork Roast with Bacon Recipe : Giada De Laurentiis. Pork Tenderloin with Seasoned Rub Recipe : Ellie Krieger. Tasty Crock Pot BBQ Country Style Pork Ribs Recipe - Food.com - 60052. Hoppin' John Recipe. Beer-Braised Country-Style Pork Ribs Recipe : Food Network Kitchens. Country Style Ribs Recipe. Hoisin Country-Style Spare-Ribs Recipe - Food.com - 375060.

Sweet Balsamic Glazed Pork Loin {Slow Cooker} I’ve had this glorious pork loin recipe bookmarked via Pinterest for a long while. It’s all over the Pinterest realm. Pinned and pinned and pinned again. Could something that has been pinned at least a hundred million times live up to the hype? Um, yes. This pork loin certainly did just that. Not only is it one of the simplest recipes in the universe to prepare (hello, slow cooker, how do I love thee?) Really. One Year Ago: The Best {Magical} FrostingTwo Years Ago: Oatmeal Pancake MixThree Years Ago: Chicken Tikka Masala. Sunday Dinner Pork Roast with Mushroom Gravy Recipe : Emeril Lagasse. Directions For the Gravy: Preheat the oven to 450 degrees F. Pierce the roast all over with the tip of a paring knife and stuff one clove of garlic into each hole, followed by a few drops of hot sauce. Sprinkle on all sides with Essence and garlic powder and rub into the meat. Heat the oil in a Dutch oven over medium-high heat and brown the roast evenly on all sides, about 10 to 15 minutes.